Insects are arthropod invertebrates consisting of an external skeleton (cuticle or exoskeleton) that they must change regularly to grow. For more information, read this article.

Each cuticle change is the moult. In some species, the transition from larval to adult stage implies a profound change in morphology, biology and ecology. This phenomenon is called metamorphosis.

Definition : Morpho-anatomic and physiological change, irreversible, changing the organizational plan of an animal occurring during the passage to the adult state. At the end of this last stage of development, the reproductive capacity, morphology and final organs are acquired.

This type of development characterizes insects whose larval morphology resembles that of adults (imagos). In this case, they will be called Juveniles. The transition from larval to adult does not take place through a pupal stage (cocoon or pupa). Morphological characteristics, such as wings, develop gradually with each moult.

– Either the juveniles (larvae) do not live in the same environment as the adult, then the metamorphosis is called Heterometabol.

– Either juveniles (larvae) live in the same environment as adults, then the metamorphosis is called Paurometabol.

The Orders of insects carrying out this type of development are Odonates (Dragonflies), Orthoptera (Locusts, Grasshoppers and Crickets), Hemiptera (Bedbugs and Cicadas), Mantoptera (Mantis-religious), Blattoptera (Cockroaches), among others.

This type of development characterizes insects whose larval morphology, biology and ecology are in no way similar to those of adults (imagos). Moreover, the transition from larval to adult stage takes place during a pupal stage (cocoon, pupa or pupa). The definitive morphological characteristics of the adult are acquired during this phase.

The orders concerned by this type of development are Lepidoptera (butterflies), Diptera (flies), Hymenoptera (wasps and bees) or Beetles (Beetles).

Video of a butterfly outbreak of the genus Heliconius of its pupa (nymph, cocoon or pupa), taken during my stay at the Smithsonian Tropical Research Institute (STRI) in Panama. For more information, here!

To get an example of development of a holometabol insect, this article presents the development cycle of tropical butterflies of the genus Heliconius.

The transformation period varies according to species but also according to temperature and outdoor conditions. Thus, the metamorphosis can take place over several days or months, or even spread over several years. Indeed, when the climatic conditions are not favourable, winter, drought for example, the pupa enters dormancy. During this period, called diapause, the body’s development is stopped or slowed down while waiting for better conditions.

Many insect species overwinter in this form, emerging in spring when temperatures and conditions become less hostile.

The pupal phase is critical for the insect because the pupa (pupa) is subject to weather and environmental conditions as well as predation due to its vulnerability and immobility. The insect is trapped in this envelope and remains defenceless. Each species has therefore put in place means to protect itself. Some hide in plants, surround themselves with silks, others nymphose in the ground or in the wood, in social insects (ants and wasps for example) nymphs are protected by adults in the colony, others use toxic substances or some species of butterflies (Lycaenidae) shelter in ant nests. 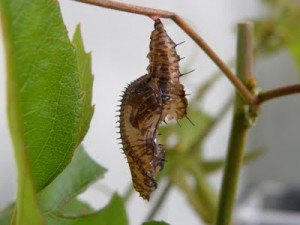