The Forest Zoology Research Unit of INRA d’Orléans has a rich entomological collection of some 600 boxes and thousands of specimens from 80 years of collection in France and around the world. No classification, inventory or valuation work had ever been done. 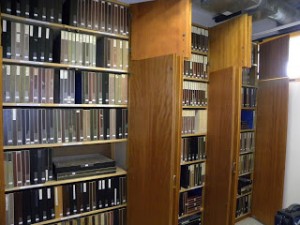 This is why, in collaboration with the Department of Ecology of Forests, Meadows and Aquatic Environments (EPPA), Alain Roques, who heads the unit, entrusted me with the responsibility of modernizing and enhancing this collection. It bears witness to a biodiversity that has often disappeared and contains incredibly rich information. The aim is to have data that can later be used for research projects on biodiversity, ecosystem conservation and population genetics. Under the “Heritage” action, funding has been granted by the Centre Region to carry out this mission.

Modernization of the collection

After a 2-day stay at -21°C designed to eliminate Anthrènes (Anthrenus sp.), each of the boxes was opened and referenced in a database. This step therefore made it possible to sanitize the collection and storage conditions.

The boxes, dating from the middle of the last century, contained Creosote* which was eliminated. Boxes that were too damaged were replaced. The contaminated cardboard and creosote were sent to a recycling centre for toxic waste.

The inventory of the contents of the 600 boxes made it possible to gather the specimens, until then dispersed, by families and subfamilies. In particular boxes of Curculionidae and Cerambycidae could be constituted.

* Creosote : derived from oils extracted from tar or wood, it was often used as pesticides and insecticides during the 20th century. Composed mainly of polycyclic aromatic hydrocarbons, it is considered toxic and carcinogenic. Its ban in Europe dates from 2002. 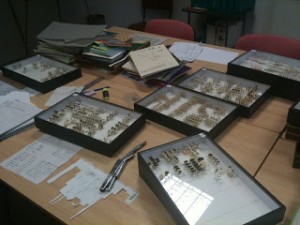 The second step was to classify all species according to the current classification. For that, an important work of updating each of the names and their place in the systematics was accomplished using the reference site Fauna Europaea (www.faunaeur.org)*.

Finally, this modernization carried out, the insects found their final place in new boxes according to the taxonomic order indicated by labels (order, families, subfamily, tribes, genera and species).

*Fauna Europaea is a programme launched in 2000 by the European Commission in order to have a database gathering valid names of all terrestrial and freshwater species living in Europe. It brings together the expertise of several hundred specialists.

Each specimen was then individually identified by a barcode and integrated into an internally developed database. This computer tool makes it possible to trace each sample entering the laboratories and to record its nature (image, pupa, leg, etc.), its origin (date and place of sampling, collector, host plant, etc.), its location in the laboratory (collection, refrigerator, freezer, etc.) and its method of packaging (in alcohol, dry, etc.). The original labelling of many specimens is incomplete. In particular, the place or date of capture is often missing. Depending on when the samples were collected, the notebooks containing this information were lost. Also, a large proportion of insects have no labelling and are not identified. All these specimens, removed from the collection, were collected by families and subfamilies in separate boxes. Due to lack of expertise and time, their identification is delayed.

The computerized collection currently includes 370 species (1,644 specimens) of Curculionidae, 101 species (757 specimens) of Tortricidae, 38 species of Chalcidoidea (576 specimens, including 280 tropical Agaonidae), 52 species of Cerambycidae (215 specimens) and 18 species of Buprestidae (93 specimens). All these families are interested in the work carried out by the Unit.

In 6 months, nearly 3,300 insects and 579 species were classified, digitized and incorporated into the database. 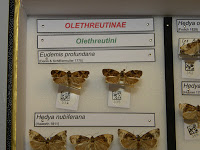 The identification system is similar to the one used to manage goods. The two-dimensional barcode is placed under each insect and read by a laser scanner. Thanks to this computer tool, information on the origin and number of specimens of such or such species but also their place in the collection are now available.

However, there are thousands of specimens from many families (Hymenoptera, Lepidoptera, Beetles…) that have not been included in the database and have not been classified. Months of work will still be needed to finalize this project.

All information collected regarding dates and sites of samples prove very relevant for atlas construction. These atlases make it possible to apprehend the sectors richest in species and the sites sheltering original faunas. For ancient specimens, it becomes possible to conduct spatial and temporal comparisons with current data in order to highlight range changes and population dynamics over the past 50 years. The Muséum National d’Histoire Naturelle de Paris (MNHN) and the Inventaire National du Patrimoine Naturel (INPN) will be associated with the integration of the data.

Read the article published in the journal Insects (OPIE)