From 2008 to the end of 2009, I joined the “Origin, Structure and Evolution of Biodiversity” laboratory, UMR 7205, from Muséum National d’Histoire Naturelle de Paris (MNHN).

Mathieu JORON’s team conducts scientific research in evolutionary genetics in order to describe the genetic and adaptive processes behind an important intra- and interspecific mimicry system in tropical, Central and South American butterflies, of the genus Heliconius.

These butterflies are a very good model for understanding how natural selection creates new species, new phenotypes and how these species interact with each other. 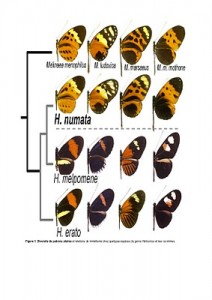 The Heliconius are butterflies with a wide variety of wing patterns. In addition, each species is composed of several geographical populations which also have different colour patterns (lire this article).

Thus, in the same geographical zone, we find butterflies presenting the same wing colours but belonging to different species. The most surprising is that some species, populations very close phylogenetically present very different patterns, and others, distant phylogenetically, have coloration inseparable from each other.

The majority colouring of a geographical region is similar to that of the mimed species which belongs to different genera such as Melpomene. This is because the latter are toxic species and therefore Heliconius benefit from this advantage. Natural selection encourages and tends individuals to resemble each other (density-dependent selection) (see recall on mimicry).

All these populations and species constitute a vast mimetic complex in constant evolution.

To learn more about the evolutionary history and genetic mechanisms at the origin of coloration in these butterflies, I invite you to read this article.

I had the chance to carry out a research mission in this context:

Some of my results were published in the journal Nature/Heredity (25 March 2015) here.

There are two reasons for this: