I am also passionate about observing and monitoring insect development. Since I was very young, I have raised all kinds of animals such as toads, frogs and salamanders and insects such as butterflies, mantises, Orthopterans (locusts, grasshoppers and crickets), butterflies, Odonates (dragonflies), phasms and ants.

I will introduce you to some of the insect species I raise and have been able to raise.

I am at your disposal for any advice, information and expertise. It will be a pleasure to help you.

Biology : Phasms are insects called Heterometaboles, that is to say that the young resemble imagos (there is no complete metamorphosis as in butterflies for example, which are Holometaboles). Most of them are nocturnal. During the day, they remain immobile in the foliage or on the ground. They are all phytophagous (feeding on plants). Phasms have the particularity of camouflaging themselves in their environment by mimicking vegetation (twigs, leaves, lichens…) and for some by imitating the movements of a leaf rocked by the wind. Some species, in addition to this mode of defence, have glands that secrete toxic and/or nauseating substances.

A very great diversity of species, forms, way of life exist on the planet. More than 6000 species are described, most of them in tropical and equatorial regions. Only 3 species are present in France, mainly in the south:

For the record, I have owned this species since I was 11 when a 6th grade teacher offered me an individual. So I have been maintaining these descendants for nearly 20 years, which must have been nearly 17 generations… I should have counted!!

This species is native to India, it is part of the Order Phasmatodea and the Family Diapheromeridae. This phasm is currently found in many countries such as South Africa, the United States or England because of its introduction in 1897 by R.P. PANTEL, a scientist who was studying a particular aspect of his biology: parthenogenesis thethélytoque (reproduction not sexed, offspring are generated from an unfertilized female gamete, males do not exist or extremely rare) (see this article).

These insects measure about 9 cm in the adult state (imago) and live about 12-14 months. Each individual can lay several hundred eggs during his life.

Their breeding is easy and requires little maintenance, which makes it a good educational tool for schools. They feed on brambles and ivy (substitute plants) at night.

This phasm occurs naturally in the tropical forests of Southeast Asia: Thailand, Java, Sumatra and Malaysia. He is a member of the Order of Phasmatodea and of the Family of Phasmatidae.

Unlike Carausius morosus, there are males and females (sexual reproduction) with strong sexual dimorphism. The female is green, has two small atrophied wings (vestigial) and can measure 16 cm for 70g. That makes it one of the biggest insects on the planet! The male is smaller (12 cm), brown in colour and with large purple wings that allow it to fly.

Because of their size, their growth is slow and long, the adult stage occurs after 18 months and the adult can live 2 to 3 years. The female’s eggs are among the largest insect eggs with a size of 9mm by 5mm. The female can lay 2 to 4 eggs per day.

This species can grow on oak and brambles, like many phasm species, individuals are nocturnal, so it is difficult to observe them in action.

It is noted that their manipulation is made difficult by their particularly aggressive defensive behavior. When they feel disturbed, males and females take up a position of intimidation and with their hind legs, made up of large hooks, grasp the hands of the manipulator. The injuries are painful. Also, the female also emits a defensive sound by rubbing her wings. 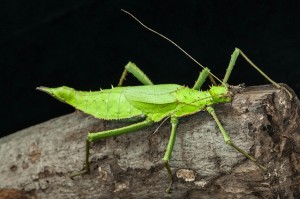 This species comes from Australia (New South Wales and Queensland), is part of the Order of Phasmatodea and the Phasmatidae Family.

There is also a strong sexual dimorphism in this species. The female measures 16 cm, has atrophied wings and a broad abdomen, covered with growths and curved like the tail of scorpions, hence its name. The male, of smaller size (10 cm) is of much thinner and elongated morphology, and have long wings allowing him to fly.

This phasm grows rapidly, from 4 to 5 months to adulthood and has a life expectancy of 4 months for males and 1 year for females. The female can lay about 2 to 4 eggs per day.

They feed on Eucalyptus, Bramble and Oak, or on Hazel and Acacia.

Their handling is rather easy, even if the females show a behavior of defense with their legs covered with hooks, it remains little aggressive.

Did you know : The young of this species have the particularity to mimic in morphology and behavior a species of ant (Leptomyrmex erythrocephalus). The young move very quickly, with the front legs raised to mimic the ant ant ant ant antennas. Behaviour that disappears at the second stage. Also, the eggs present at the capitulum (exit capsule) a ball of nutrients (see egg photo). Thus, once laid and fallen on the ground, the egg is harvested by an ant and brought back to the nest. Eggs are stored and protected from predators during their development. The young, after hatching, leave the anthill without being worried by the ants because of their mimicry but certainly also by the presence of pheromones* on their cuticle* inhibiting any aggressiveness of the ants.

* Pheromones : Chemical substances emitted by plants and animals that act as messengers between individuals of the same species, such as sexual attraction.

Alike the two previous species, this species belongs to the Order of Phasmatodea and the Family Phasmatidae. She lives in Papua New Guinea.

It is a nocturnal phasm, large, the male reaches 10 cm and the female 15 cm. There is little sexual dimorphism between the male and female, they become black to dark brown adults (mimicking the bark of a tree). The male is more difficult to handle because of its aggressive defensive behaviour and the presence of thorns and dewclaws on its hind legs. The female is easier to handle.

The male to defend himself, uses these legs, curves his abdomen like a scorpion and, like the female, emits a nauseating odor.

Although this species reproduces sexually, there is the possibility for females to produce offspring by parthenogenesis (see this article), without reproduction. The adult stage (imago) occurs after 5 to 9 months and can live almost a year in the imago state.

Alternative feed in breeding can consist of ivy, bramble and oak, apple pieces and potato peelings are appreciated.

This species is gregarious, individuals gather on the ground, hidden, during the day. 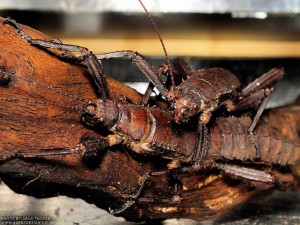