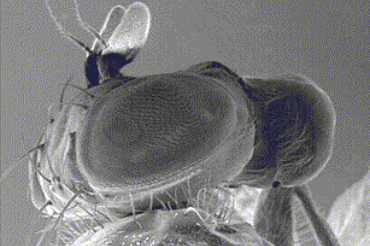 The eyes, in their diversity of form and structure, allow any organism (invertebrates and vertebrates) to collect light energy (photons), convert it into electrical energy that will then be transmitted to the brain via neurons where it will be analyzed and interpreted to give birth to a mental representation of the environment to the animal allowing it to move, locate a prey or a sexual partner.

However, the eye of arthropods is different from that of vertebrates both in its anatomy and its mode of functioning: made up of several similar subunits, the ommatidies (see infography opposite), they are called compound eyes. This series of three articles attempts to provide a general synthesis on vision in insects : 1) Eye anatomy and structure ; 2) Vision and perception of movement ; 3) Receptor physiology and light sensitivity regulation mechanisms.

The anatomical and structural description of ommatidies, subunits of the eye composed of insects, having been the subject of a first article, this one is devoted to the formation of the image, and to the perception of distance and movement.

Image formation depends on the optical properties of the contact lens and the crystalline cones of the ommatidie (read anatomy article). These two structures, with different refractive indices, deflect light waves as they pass through them.

The eyes composed of insects are of two types : apposition and superposition (read article on anatomy).

The main, even the only refracting surface, is the contact lens, sometimes the crystalline cones as in lepidoptera.

The presence of corneal cells, also called secondary pigment cells, channels light to the rhabdome of the ommatidie. Each ommatidie thus functions independently and produces an inverted image of the object of the visual field whose center is at the tip of the rhabdome (union of the rhabdomers of each photoreceptor cell) (read article on anatomy) (Figure 1). Thus, in each ommatidie, the rhabdome receives an image of overall intensity varying according to the quantity of light. The rhabdomes collectively transmit a mosaic image consisting of the contribution of each ommatidie. Although this results in a loss of image detail since all photoreceptor cells share the same field of view, this mechanism allows the insect to maximize the amount of light entering the rhabdome.

These eyes differ mainly from the eyes appositions by

Figure 2 : cylindrical lens of a compound eye type superposition with a variable refractive index in the cornea and crystalline cone (Source : The Insects : Structure and Function – R.F. Chapman – 5th Edition (2013) – p716 – Modified by B. GILLES)[/caption]

Thus, the light is not refracted at the entrance of the lens but in its bosom by following a curved path allowing the rays coming from several lenses to be redirected towards the same rhabdome. This mechanism, first described by Austrian physiologist Sigmund Exner (1846-1926), was adapted to create double-lens telescopes.

The resolution defines the degree of fineness with which the eye forms an image of an object. In compound eyes, it is determined by two parameters: the interommatidial angle (ΔΦ) and the angle of light entry into the ommatidie (https://passion-entomologie.fr/yeux-composes-insectes-anatomie-structure/) (acceptance angle) (read these articles anatomy et vision 3D).

The smaller the interommatidial angle, the sharper the image. In insects, this angle is generally between 1 and 3°, however, depending on whether the species are predatory or not, it can be 5° in beetles or 0.24° in odonates (dragonflies). Eyes composed of certain species may have areas with different interommatial angles allowing them to obtain sharp images in a specific visual field to capture prey or locate sexual partners in flight – examples: mantis-religious (on the front of the eye) and dragonflies (on the top of the eye) – (lire cet article).

The fly has however found a parry. Natural selection has modified the neural network of its visual system so that each rhabdome receives light from 7 ommatidies, allowing it to maintain a certain resolution with a low interommatidial angle and capture enough light.

In terms of resolution, there is no benefit in having a smaller interommatial angle than the acceptance angle. This angle depends on the rhabdome width (d/f) and light scattering (Figure 3a). When light passes through a circular structure such as the lens and the rhabdome, the diffraction of light forms an image called : Airy’s stain, in honor of its discoverer, the English mathematician, physicist and astronomer George Biddell Airy (1801-1892). This optical phenomenon leads to the formation of a disc due to the undulatory nature of light. The light spot radius depends on the wavelength (λ) and the lens diameter (D) (Figure 3b).

The resolution corresponds to λ/D. Thus, in insects, the diameter of the lens being about 25µm, and the average wavelength of light being around 0.5µm, the resolution of the image at an ommatidie is about 1°

By way of comparison, the pupil of the man measuring 2,5mm, the resolution is 100 times more important than that of the bee for example.

Bees are excellent study models for understanding vision in insects because they can be trained to discriminate not only shapes but also subtle spatial details as distinct elements in the same image.

This faculty is found in other species as flies of the family Tephritidae (lire this article) or polist wasps (Hymenoptera) of the species Polistes dominulus. The latter, living in small colonies of about twenty individuals, have the ability to distinguish variations in facial patterns/motifs present on their congeners in order to recognize them individually as members of the colony, a skill that is found in humans for example (figure 4).

Figure 5 : Visual field of the cockroach Periplaneta – a) in the vertical plane – b) in the horizontal plane – Only a blind area is present below the head (Source : The Insects : Structure and Function – R.F. Chapman – 5th Edition (2013) – p719 – Modified by B. GILLES)[/caption]

Thanks to their compound eyes, insects have a large visual field. For example, the cockroach Periplaneta (Blattodea) is 360° with binocular vision on the front, back and bottom (Figure 5). Such visual fields are also found in many other insects such as orthopterans, diptera, odonates, etc., insects whose vision plays a major role in their ecology.

Insects have the ability to estimate distances efficiently, for jumping, predation, flight…

Distance estimation can be done by two mechanisms: stereoscopic and parallaxis of motion .

Figure 6 : Diagram showing how the width of the head and the angle between the two eyes increase the accuracy of the distance estimation (Source : The Insects : Structure and Function – R.F. Chapman – 5th Edition (2013) – p720 – Modified by B. GILLES)[/caption]

Large insects generally have good visual resolution (small interommatidial angle and angle between the two large eyes) and binocular vision giving them strong potential to appreciate distances stereoscopically. This is the case, for example, for mantia-religious (Read this article).

Evaluation errors occur when the interommatial angle is greater than 2° and the distance between the object and the large insect. This is why, in order to increase accuracy, predatory insects have their eyes wide apart and placed on either side of the head (Figure 6).

Another technique is to swing to the side to increase the angle between the two eyes to 1° or more: parallax motion behavior. The observer’s transverse swaying accentuates the relative position of the object. The further away the observer is from the observer, the less the observer will move in the field of view in relation to the nearest objects.

Visual tracking consists in keeping an object moving over a precise and fixed area of the eye (la fovéa) (example in the mantis-religious : black spot in the middle of the eye – infography below) in order to maintain maximum resolution and precision.

If the object moves slowly and evenly, the insect will compensate the movement by moving either the head (mantis-religious) or the whole body (fly Calliphora) to keep it in its visual field (figure 7).

The two behaviours can occur in the same species, which are mostly predatory, jumping or flying.

Mantis head-religious – the fovea are visible : black spot in the middle of the compound eye (Source : media.giphy)[/caption]

The functioning of all these structures and the processing of visual information will be the subject of future articles (to be informed, subscribe to the newsletter if this is not yet done !)

Recommendation of books on this theme