Heliconius within the “Institute of Systematics, Evolution and Biodiversity” of Muséum National d’Histoire Naturelle de Paris (UMR 7205-CNRS) and on the Gamboa site (Panama) of Smithsonian Tropical Research Institute (STRI) during 6 months.

I also did a one-month field mission in French Guiana, including 10 days at the Nouragues station.

The latest works of Mathieu JORON’s team and his international collaborations, integrating my results, have just been published in the journal Nature/Heredity of 25 March 2015 :

I put you the link here so that you can read it. 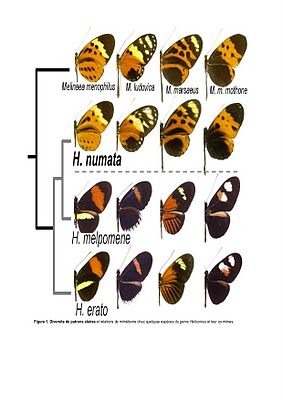 evolutionary biologists try to understand the evolutionary mechanisms at the level of genetic architecture leading to the diversification of ecologically important morphological traits as are the colours on butterfly wings. Butterfly species of the genus Heliconius form a mimetic complex where there is a great diversity of intra- and inter-species patterns evolving together ( see illustration opposite).

Using molecular tools such as: associated restriction site (ARS), whole genome genotyping and genetic mapping, but also new morphometric methods for analysis of pattern variations on butterfly wings, scientists have been able to show that within these species, the variation of wing patterns (phenotype) is controlled by a set of highly conserved genes. The expression of these genes and their effects on phenotype vary between species. The genetic architecture, although it is constant throughout evolution, still allows the appearance of phenotypic adaptations at the local level.