For most people, insects are very small animals that run, fly or swim around us.

Or, some species have sizes far exceeding those of some mammals, birds or amphibians!

Le length record is held by a female phase of the species Phobaeticus chani (Phasmatidae family) : 35.7cm of body and 56.7cm with legs (see photo 1). This specimen, offered to the Natural History Museum of London by Datuk Chan Chew (photo), whose name was given to the species, beats the previous record of 2.5cm, held by another species of the same genus: Phobaeticus kirbyi.

Described in 2008, only 3 specimens (2 males and 1 female) have been discovered to date in the tropical forests of Borneo Island (Malaysian state of Sabah). Living in the canopy (tree tops), its observation is extremely difficult. The ecology and biology of this species remain unknown.

The eggs present a unique characteristic in insects: two flattened growths forming “wings” located on each side whose role is to increase the bearing capacity during the fall after egg laying (photo 2). This wind dispersal mechanism (anemochory) thus allows the egg to drift into the air to fall away from the laying area, thus increasing the chances of survival of the offspring. Many plant species, such as maple, linden and maritime pine, have also developed anemochoria as a means of propagation.

– Titanus giganteus, considered to be the largest beetleoptera in the world, is a species of the Cerambycidae family some specimens of which exceed 15cm. The record is held by a 16.7cm male: the size of a chihuahua! (see photo 3).

These insects are found in tropical forests of South America, especially in Brazil and French Guiana. Its exceptional size makes the species prized by collectors causing it to disappear.

His biology is little known : it would approach that of the other species of the same family. The larva develops during several years in wood in decomposition, the adult living as for him only a few weeks without feeding the time to reproduce. Adults emerge during the wettest period of the year.

Males, attracted by light, make up the vast majority of catches. It would seem that the females are larger than the males as for the other species of Cerambycidae, but the small number of them in collection does not make it possible to dismantle it.

– Goliathus goliathus : is a beetle belonging to the ketoin family (Cetoniidae), which by volume and weight is considered the heaviest insect. Adults can reach nearly 11cm for males and 8cm for females. The size of the larvae remains the most spectacular: 25cm in length and 100g, i.e. the weight of 3 domestic mice (see photo 4). 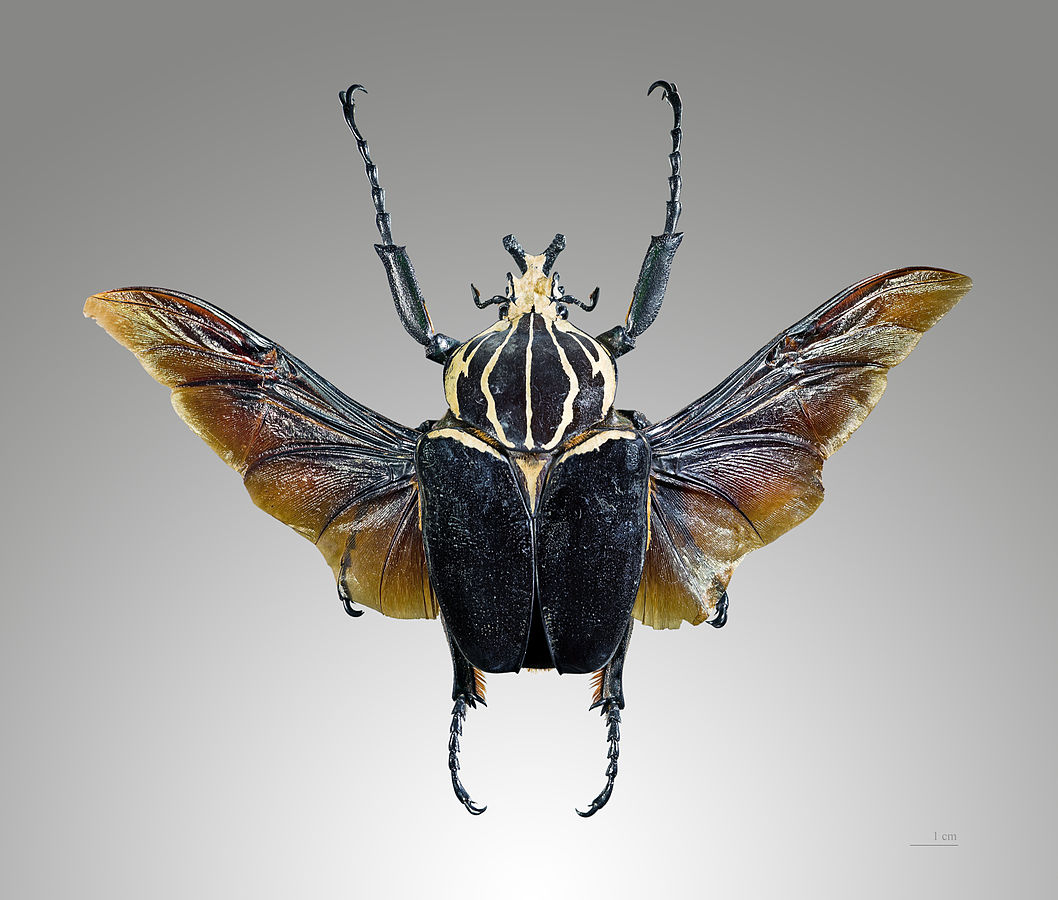 The males have a characteristic growth on the head, forming a “horn”, which they use to turn over their congeners during the fights for reproduction. Their life cycle is similar to many beetles: larvae develop in decomposing plant matter over several years, with the adult living only a few weeks to reproduce.

Another family of insects, Orthoptera, has some of the heaviest species on earth Weta from New Zealand. These cricket-like species are endemic to this region of the world, with the largest specimens reaching nearly 75mm and 45g. To discover these insects, I invite you to read this article Les Weta géants de Nouvelle-Zélande. 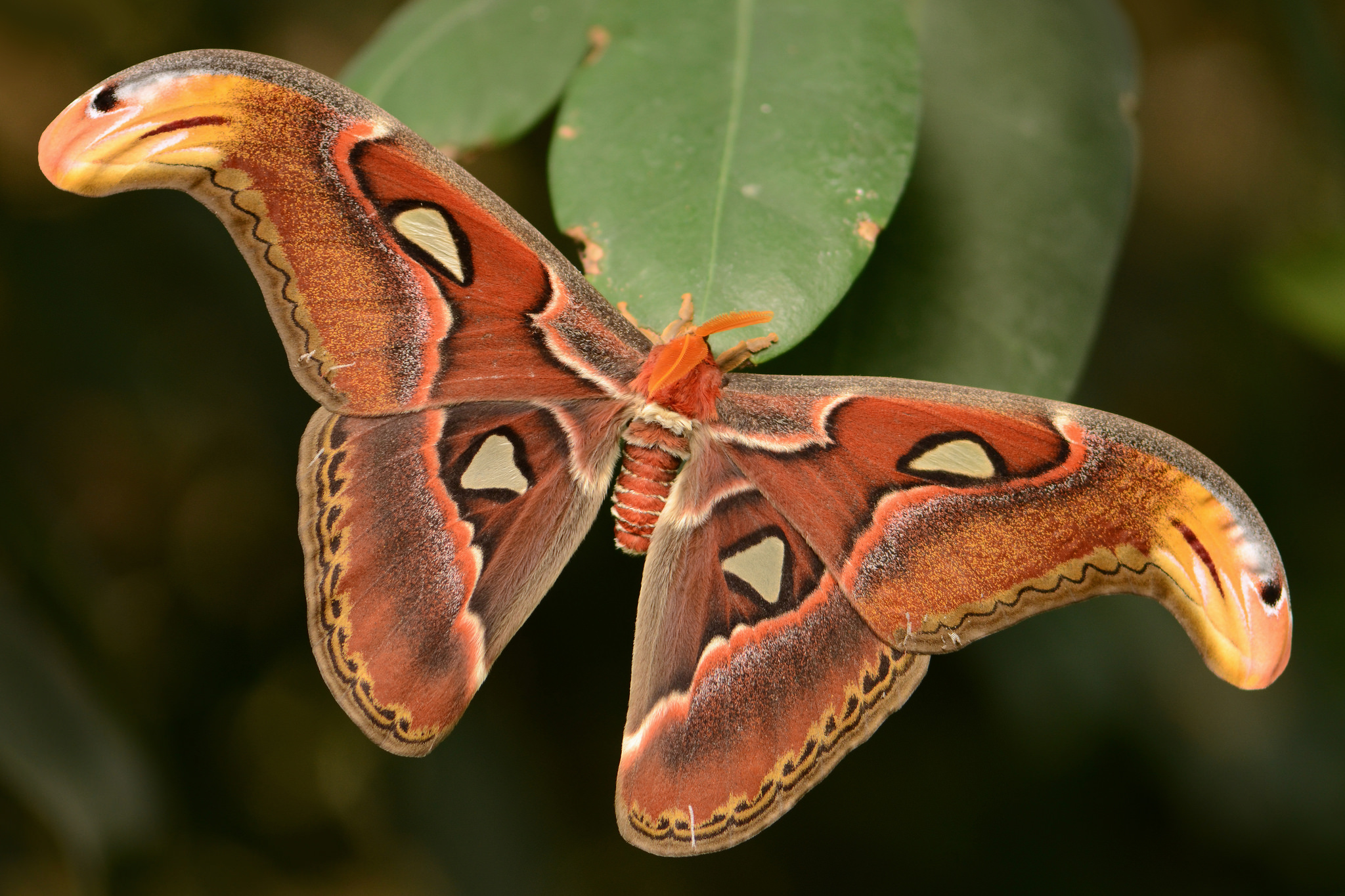 Le record of the largest wing surface belongs to two species of butterfly of the family Saturniidae : Attacus atlas (see photo 5) with a record wingspan of 26.2cm and Coscinocera hercules reaching 27cm and 300cm2.

Attacus atlas is a nocturnal species found in tropical and subtropical forests of Southeast Asia. The female lays 2.5mm eggs and the caterpillar can measure up to 11.5mm!

Coscinocera hercules is an endemic species from New Guinea and northern Australia. A female specimen, captured at Innisfail in 1948, measured 36cm in wingspan! The female dies quickly after laying about 100 eggs on several host species. The blue-green caterpillar grows up to 10cm before metamorphosing.

However, the record is awarded to two other species, one is nocturnal and belongs to the family Erebidae : Thysania agrippina, with a record wingspan measured at 28-29cm (photo 6). The species occurs in South and Central America. The second : Ornithoptera alexandrae, is a diurnal species of the Papilionidae family whose record is 31cm! (photo 7). 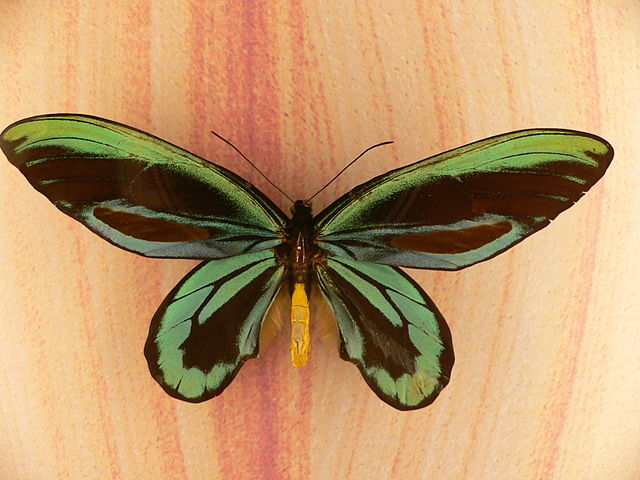 Ornithoptera alexandrae, known from only two localities of about ten square kilometers in northern Papua New Guinea, is considered one of the rarest species in the world and endangered due to the destruction of its habitat (oil palm plantations).

A contrario, miniature insects, barely visible to the naked eye, rub shoulders with these giants of the tropical forests.

Le record of the smallest size is a parasitoid wasp species (which grows in the eggs of other insects) of the family Mymaridae : Dicopomorpha echmepterygis.

Discovered in Costa Rica in 1997, males of this species, apterans and blind, measure only 0.139mm, the diameter of a hair! (see photo 8). Females, 40% larger than males, lay in eggs of the species Echmepteryx hageni (Psocopters of the family Lepidopsocidae).

The most surprising thing about this insect is that all these organs of reproduction, digestion and respiration are located in an abdomen whose size is smaller than a paramecium, a unicellular organism!

The phasm Phobaeticus chani, with these 56,7cm is thus 4080 times longer than the wasp Dicopomorpha echmepterygis, the smallest insect in the world.

In comparison, the largest land mammal, the African elephant (Loxodonta africana) with its 5.5m length, is only 170 times longer than the smallest (3.3cm) : the bumble bee (Craseomycteris thonglongyai) which occurs in Thailand.

A relationship far removed from that existing in insects!

When considering the blue whale (Balaneoptera musculus), the largest animal of all time (35m), the ratio is also only 1170 : i.e. 3.5 times weaker!

A 4080 ratio applied to the bumblebee bat (3.3cm) would be equivalent to a size of 134m of the largest mammals.