The family Tephritidae, or “fruit flies”, includes more than 4000 species divided into 500 genera.

It is one of the most economically important families of diptera due to the damage they cause in crops (fruits and vegetables) and their presence in many countries. For a century, Tephritidae have been one of the most studied pests (see research mission in CIRAD of La Réunion)

The fields of investigation concern biology, such as behavior, sexual selection, speciation or protection methods.<!-more–>

This family is characterized in adults by mostly spotted wings, a well developed arista*, a subcostal rib bent at its tip, the absence of vibrisse* or by an abdomen formed by 5 to 6 visible segments, ending in the female with an ovipositor*.

Of the 3 existing subfamilies in the world, only that of Dacinae is represented on Reunion Island, sub-divided into 2 genera Dacus (Fabricius) and Bactrocera (Macquart) and 7 species.

At the global level, about 700 species of Dacini have been described to date.

Adults of the two genera differ by a fusion of all tergites* fused into a single plate in the genus Dacus, whereas a contrario, all abdominal tergites are free in Bactrocera ssp.

Flies studied during my research at the CIRAD of La Réunion (see article) :

Tephritidea, like all diptera, are holometabolic insects (complete metamorphosis). The complete cycle of Tephritidae takes place in 4 stages:

– l’oeuf is laid under the epicarp* of the fruit a few millimeters deep.

– les larvae, or maggots, are ivory in colour and pass through three larval stages. They feed on the pulp of the fruit. Their development time varies according to biotic and abiotic conditions. Pupation and metamorphosis take place in the soil. 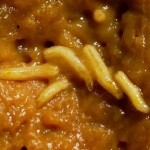 The females bite with their ovipositor, the fruits under the epidermis to lay specifically for each of them. The size of the eggs varies according to the species of fruits, up to 40 eggs for B. cucurbitae.

Some activities are dependent on adults’ internal circadian rhythms and/or abiotic factors, such as temperature or light intensity.

Night is reserved for rest, sheltered on support plants, which may or may not be host plants. Food activity usually peaks in the morning. Tephritidae are found on host plants for laying and feeding. The rest of the time they are placed on non-host plants near cultivated plots. Flies therefore regularly move between the laying areas (cultivated plant) and the peripheral areas (non-host plant).

La ponte de D. ciliatus is performed in the morning, D. demmerezi in the afternoon, while B. cucurbitae can lay throughout the day.

– Ovipositor : organ located at the posterior end of the abdomen and used for egg laying