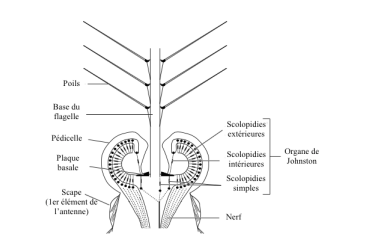 Alike all arthropods, insects have an external skeleton, the exoskeleton, consisting of chitin and forming the cuticle (lire th article). Its insulating properties imply that the cuticle creates a barrier to the reception of stimuli from the external environment to the internal physiological environment. In order to circumvent this problem, evolution has given rise to a whole range of structures designed to transmit a wide range of types of stimuli to the insect, enabling it to grasp its environment effectively and accurately and to respond favourably to any modification by an adapted behaviour.

Among these sensory structures, some are sensitive to mechanical distortions (mechanoreceptors object of this article), others to light (photoreceptors) and others to chemical components (checeptors or chemocheceptors).

Mechanoreceptors are classified into three main categories (Table I)

Alike all arthropods, insects have an external skeleton, the exoskeleton, consisting of chitin and forming the cuticle (lire th article). Its insulating properties imply that the cuticle creates a barrier to the reception of stimuli from the external environment to the internal physiological environment. In order to circumvent this problem, evolution has given rise to a whole range of structures designed to transmit a wide range of types of stimuli to the insect, enabling it to grasp its environment effectively and accurately and to respond favourably to any modification by an adapted behaviour.

Among these sensory structures, some are sensitive to mechanical distortions (mechanoreceptors object of this article), others to light (photoreceptors) and others to chemical components (checeptors or chemocheceptors).

Mechanoreceptors are classified into three main categories (Table I)

Featuring amazing and multiple properties, they can intervene in the sense of touch when stimulated by contact with an object or substrate, in the sense of hearing by stimulation of air or water and also in the control of posture and movement when excited by movements of parts of the insect’s body.

Chordotonal organs, or scolophores, are intradermal receptors that most often act as proprioceptors (perception of the position of different parts of the body) or are involved in hearing.

They consist of simple elements called scolopidies, attached to the cuticle by one or more of their ends. They can be solitary or grouped in clusters.

Each scolopidy is composed of 3 cells (see figure 1) : 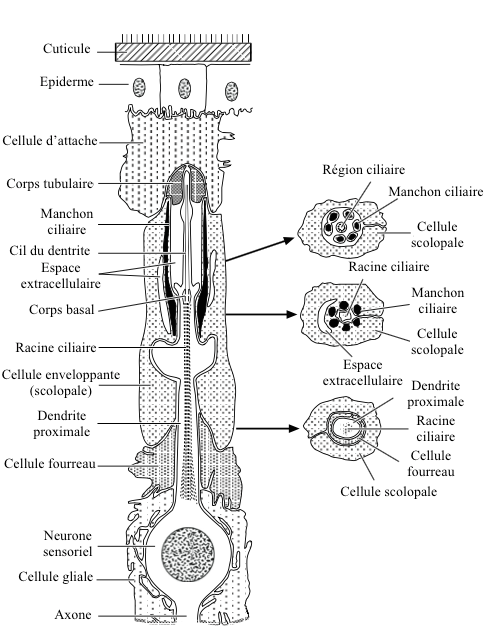 Sensory neuron dendrite, covered by the enveloping cell, has at its end a ciliary extension inserted into the attachment cell by a tubular body.

The ciliary region, located in an extracellular space, is stiffened by the presence of active rods secreted by the scolopal cell (structure similar to a “barrel-shaped sleeve”). A second extracellular space, encountered at the base of the sleeve, is called a “ciliary collar” because of its arrangement.

Inside the neuronal dendrite, a structure composed of 9 double filaments from the base of the ciliary region, runs to its proximal part ciliary root.

The attachment cell acts as a link between the chordotonal organ and the epidermis or other types of tissue.

The functioning of the chordotonal organ is based on three successive processes: 1) coupling, 2) receiver/generator potential, 3) action potential.

The approximation of two cuticular plates (for example two elements of a joint) to each other induces a modification of the scolopid structure. Structural deformation produces a displacement of the ciliary sleeve leading to flexion of the dendrite lash. This action collects mechanical energy at the cellular level, which corresponds to coupling.

The bending of the eyelash triggers the opening of ionic channels (mostly potassium) located on the surface of the cell membrane. This ion exchange creates a depolarization (transient from a negative value to a positive value on the surface of a cell) and thus an electric current. This mechanism converts mechanical energy into electrical energy. The energy thus produced is the potential generator (PG), also called receiver potential.

A depolarization above a certain threshold leads to the formation of an potential for action (PA), also called influx nervous. This allows the transmission of depolarization along the dendrite and neuron, and thus the sending of the nervous message to other neurons through the body. The principle consists of successive opening/closing of the ion channels modifying the electrical potential of the membrane.

The response to a stimulus can be either tonic or phasic. It is tonic when the maintenance of the flexion of the eyelash (structural modification of scolopidia) causes the emission of several successive APs, on the contrary, it is called phasic when no other AP is emitted.

For more information on these processes, I invite you to read the corresponding paragraph in this article.

III) Distribution and function in insects

Chordotonal organs are present throughout the body of insects. Their function is multiple: proprioception – substrate, air and water vibration detection – gravity detection – hearing.

For example, some of these organs in the genital chamber have the role of detecting the pressure exerted by the arrival of oocytes. Their stimulation triggers specific muscular mechanisms allowing the sperm to reflux from the sperm to achieve fertilization.

Others, located in the thorax, are large (20 scolopidia) and intervene in the control of the movement of the head with respect to the thorax.

At the base of the wings, these organs are stimulated by the forces exerted during flight (read this article).

In one insect leg, 4 or more types of chordotonal organs may be present

Particular chordotonal organs are located in the peduncles of the antennae of all insects: the Johnston’s organs.

It seems that all insects have chordotonal organs at the femoral-tibal joint (FeCO). These organs have been particularly well studied.

hypodermis (deep layer of the dermis) of the femur where it is attached by a ligament, and in the apodema (external skeleton located inside a joint in arthropods) of the head of the tibia near the extensor muscle ( see figure 2). Other elements are involved to maintain the three-dimensional structure of the organ. Simpler arrangements are found in other insects such as Diptera (flies), Lepidoptera (butterflies) and Hemiptera (bugs) where the chordotonal organ is directly inserted into muscle fibres.

The role of this organ is to inform the insect on the acceleration, speed and position of the tibia relative to the femur during a jump or walking. Other organs are also involved in the control of movements: single senses and sensils campaniformes (read this article).

Chordotonal organs are connected to reflex neural arches located in the extensor and flexion muscles of the legs: they contribute to maintaining posture during walking (flying or swimming) and to specific movements accomplished by the insect: mimetic movement of a leaf in the wind in the phasm for example.

These organs, located in the proximal parts of the tibias, are generally composed of 10 to 40 scolopidia, sometimes much more, up to 400 in some parasitoid wasps (that lay and develop in eggs and the bodies of other insects).

Contrary to femoral organs, they are not associated with a joint. The scolopidia, grouped in clusters, are in contact with a trachea (space where air circulates for breathing) at one end and fixed from the other to the cuticle via the attachment cells ( see figure 3).

The subgenual organ consists of two parts (proximal, distal) in many insects like Odonates (dragonflies), Blattodea (cockroaches) and Orthopterans ; only one distal part in Homopterans (cicadas), Heteropterans (bugs), Neuroptera (chrysopes) or Coleopterans and Diptera.

Sensitive to substrate vibrations, they thus play a role either in detecting the arrival of a predator or in intra-specific communication (search for sexual partners or aggregation).

These organs are very sensitive. For example, in cockroaches of the genus Periplaneta, a displacement of only 0.2 nanometres (0.2 billionths of a metre!) and a frequency of 1.5 kHz is sufficient to trigger a nervous response (PA).

In parasitoid wasps (Ichneuminidae), chordotonal organs have another function: to search for prey (hosts) under tree bark. 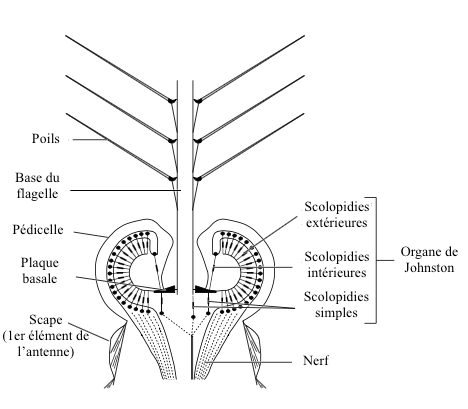 These organs, located in the antenaise peduncle of all adult insects or in a more simplified form in larvae, have the characteristic of being made up of a flagellum which is incorporated into a pedicel whose base contains many scolopidia.

In mosquitoes, flagellum is tree-like and scolopidia form a double ring surrounding its base (figure 4).

It works simply. When the flagellum is solicited by a vibration of the air, the action generates a mechanical effect at its base which repercussions on scolopidia by a structural modification producing finally a potential of action (PA).

These organs are particularly well developed in flies (Diptera), which can contain more than 20 000 scolopids.

The simple senses and the campaniform senses also play some of these functions: read this article.

L’organe tympanique is a chordotonal organ specialized in receiving sound vibration, it corresponds to the organ of hearing and hearing. 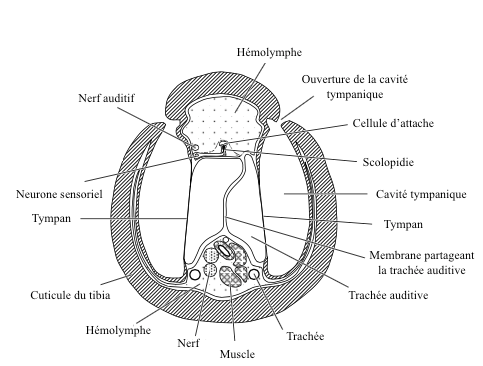 Figure 5 : Cross section of a tympanic organ of the anterior leg of a grasshopper (Source : after Schwab, 1906 – The Insects : Structure and Function – R.F. Chapman – 5th edition – p757 – modified by Benoît GILLES)[/caption]

The general structural aspect of the tympanic organ is simple: it is a thin area of the cuticle (the tympanic membrane), supported by a bag filled with air (or in contact with a trachea) and free to vibrate ( see figure 5 and 6).

Hundreds of scolopidia are fixed on the inner surface of the eardrum which are activated when the eardrum starts to vibrate.

The location on the body of these organs varies greatly according to families and species. They are found on the neck of some Beetles, on the pair of front legs in crickets and grasshoppers of the Tettigoniidae family, on the abdomen in cicadids (Cicadidae : read this article), butterflies of the family Geometridae and tiger beetles (Cicindellidae beetles) or on the thorax of certain aquatic bugs and mantises (Mantodea).

A sound wave that contacts the eardrum makes it vibrate. This vibration acts on scolopidia, which, depending on the amplitude and intensity of the sound, will be more or less stimulated, generating a specific proportional nervous response (PA). 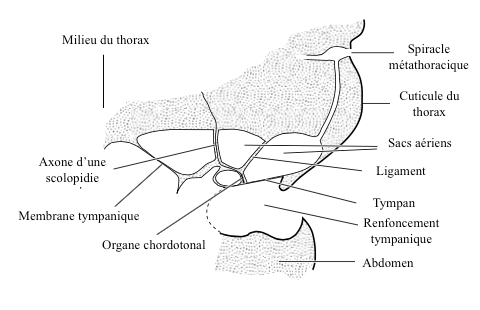 Depending on the source, the sound wave can strike the eardrum either on its external or internal side (via the trachea or through the organs), or on both sides. This phenomenon intervenes, among others, in the determination of the direction of the sound source.

Tympanic organ structure and configuration vary according to species and their role. Certain areas of the eardrum can amplify or attenuate particular frequencies, in the same way as an acoustic filter. In addition, some scolopidia have specific excitability (stimulation) thresholds. The tympanic organs are thus adapted to the needs of insects.

For example, the moth, a butterfly of the Noctuelidae family, has scolopidia sensitive to low frequency sound waves and others to high frequency sound waves. This configuration allows it to distinguish sounds of distant origin (low frequency) corresponding to the surrounding noise from those emitted by bats (high frequency) nearby. The noctuelle can detect sounds in a range from 1kHz to 140kHz, with a maximum sensitivity around 20-40kHz (the average frequency emitted by bats) (see videos at the end of the page).

In other insects like the cicada, males emit successive sound pulses specific to the species. Female neurons are designed to be stimulated and activated only by the frequencies and sound intensities specific to their species.