One of the most universal needs of animals is to understand the environment in which they live to move in complex and diverse environments in search of congeners, to flee predators or capture prey.

The acquisition of information can be done in various ways with the senses of hearing, touch, smell or vision. The latter is the most effective for day insects. For nocturnal insects, other specialized sensory organs, such as cuticular mechanoreceptors, placed on antennas, legs and other body parts, intervene in the touch (contact or air current) for example (read articles on mechanoreceptors). 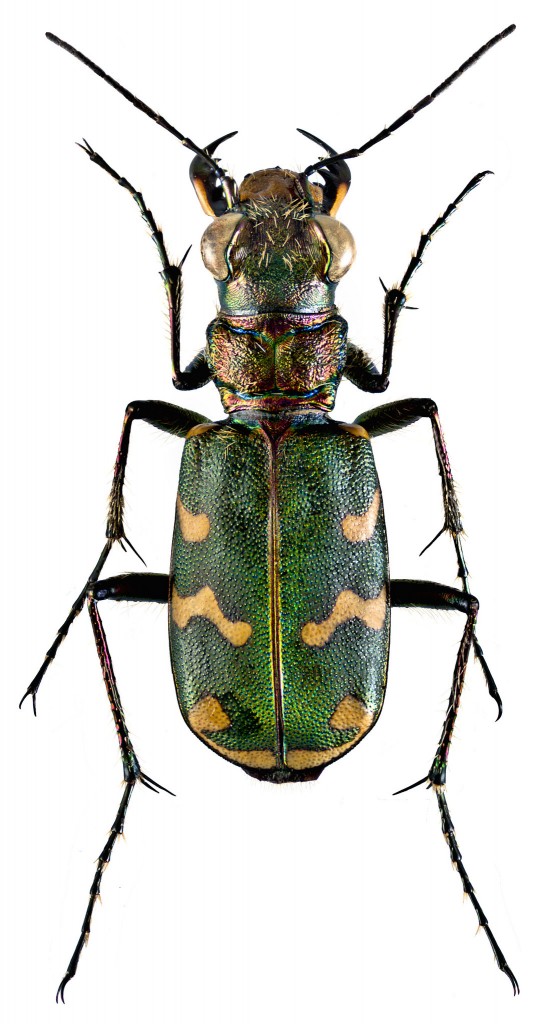 Day predatory species generally have enlarged eyes and high visual acuity developed for capturing moving prey. We find these adaptations in dragonflies (Odonates), flies (Diptera) or even Beetles as some species of the genus Cicindela (article on the anatomy of the eyes of insects to read here). Known in common language as tiger beetles, these insects belong to the family Carabidae and the subfamily Cicindelinae. All tiger beetle species are predatory, some nocturnal, others diurnal, and capture their prey by chasing them on the ground by very rapid movements.

Surprisingly, daytime tiger beetles perform successive stop phases at regular intervals during their run. This behaviour has been shown to result from the speed at which these insects run. Despite large eyes adapted for wide and precise vision, the acceleration phases are so high that their photoreceptors (photoreceptors) located in their eyes cannot capture enough blurred vision. Speeds of 2.4 m per second were recorded, 120 times the length of the insect. In comparison, it is as if a man of 1.70 m moves at 734.4 km per hour, and that, on the surface of the ground !

So, in order to visualize again precisely the prey and the obstacles of the environment which are in front of him, the insect must suspend its course a few tens of milliseconds to carry out a focusing.

Studies published in 2014 by two American scientists, Daniel B. Zurek and Cole Gilbert, showed that daytime tiger beetles compensate for this loss of visual perception by relying on their antennary mechanosensitivity to prevent obstacles during the race.

Their experiments showed that individuals without antennas collided with 60% of the obstacles while those made blind avoided as many obstacles as control individuals (with antennas and functional eyes) (see figure 1 and videos at the bottom of the page).

Figure 2 : C. hirticollis and the measurements of angles of these antennas with respect to the center of the body (Source : Zurek & Gilbert (2014) – Modified by B. GILLES)[/caption]

Ticindels have developed antennas with special adaptations. Thus, unlike the antennas of nocturnal species, which are flexible and perform circular movements, as do those of cockroaches, those of daytime species remain static, rigid and fixed. In addition, their antennas are distally curved and placed just above the substrate statically ( see figure 2).

However, the biomechanical properties of tiger beetle antennas remain largely unknown and remain to be studied

Because of their size and the number of photoreceptors, the eyes consume a lot of energy (ATP). On the other hand, they provide high visual resolution at high frequencies. Using successively the visual system and the antenna system provides an advantage in terms of energy consumption.

Figure 1 : Obstacle avoidance results for insects without antennas or vision, compared to controls (Source : Zurek & Gilbert (2014) – Modified by B. GILLES)[/caption]

– Zurek D. B. & Gilbert C. (2014) : Static antennae act as locomotry guides that compensate for visual motion blur in a diurnal, keen-eyed predator. Proceedings of the Royal Society B 281 (lien)