Flies of the Diopsidae family have the amazing feature of having their eyes positioned at the tip of outgrowths called ocular peduncles located on each side of the head.

This morphology of hypercephalization and lateralisation of the visual system is also found in vertebrates, where the best known case is that of the hammerhead shark, in crustaceans (crabs, shrimps), in other insects such as Hymenoptera (wasps, bees), Heteroptera (bugs) or in other families of Diptera (flies)..: Micropezidae, Otitidae, Platystommatidae, Tephritidae, Richardiidae, Perisscelididae and Drosophilidae (see photo album at bottom of page).

The Diopsidae family, however, has the highest degree of complexity in this adaptive process.

I) Diopsidae ecology and biology

The Diopsidae group 194 species divided into 14 genera whose range is concentrated almost exclusively in the tropics and the Old World. In 1997, one species was discovered in Europe: Sphyracephala europaea ( see photo 2).

These insects occur in dense, dark habitats in tropical and sub-tropical forests, most often near bedding. Adults feed on bacteria on the surface of dead leaves or animals and larvae feed on plant debris. 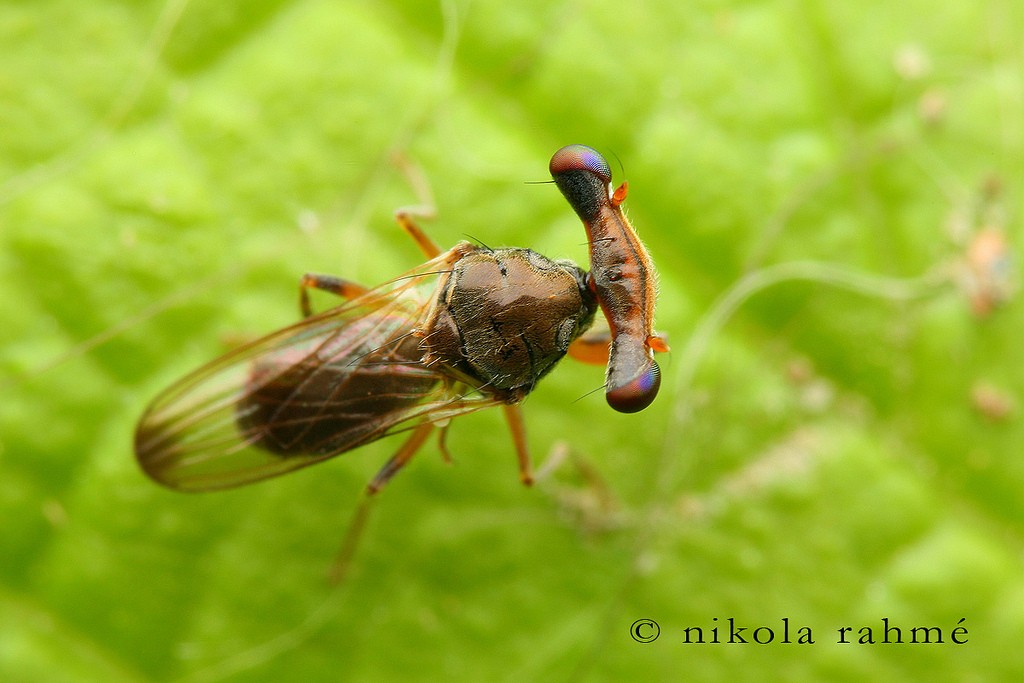 These insects measure on average 10 mm in length. Some of these species, such as Cyrtodiopsis whitei, have a longer eye gauge than their body ! (see photos 1 and 3).

Species are said to be monomorphic (males and females have eye stalks of the same length) and others dimorphic (males have longer eye stalks than females). This sexual dimorphism is found in unrelated genera and species, suggesting that this morphological character appeared several times independently during evolution.

Dimorphic species live mostly in the wet undergrowth bedding. Dispersed in low vegetation during the day, flies gather at night on the foliage (lek). In species such as Teleopsis dalmanni and C. whitei, with strong sexual dimorphism, males fight to obtain the best sites at nightfall to take control of females. These fights consist, after mutual observation, to rearing up, to deploy their front legs along their eyes and to strike them (see video below and photo album at the bottom of page). These behaviours can sometimes last until dawn.

Flies in this family, unlike many others, breed several times throughout their lives. Females of T. dalmanni, for example, mate more than 10 times in one morning. This surprising behaviour remains partly unexplained.

A hypothesis suggests that females multiply mating acts with several males in order to obtain a sufficient quantity of semen. This behaviour therefore leads them to multiply their matings in order to increase their chance of fertilizing a female, especially since females of certain species, such as Diasemopsis meigenii, have the ability to eject sperm from undesirable males.

For their part, males produce few sperm, expensive in energy, to be able to multiply matings, encouraging females to mate with many of them. During reproduction, the interests of females and males are therefore divergent: this process, called “sexual conflict”, is found in all sexual organisms and is one of the mechanisms at the origin of sexual selection.

Other particularity: Diopsidae development is slower than for other families of flies, however, their life expectancy is longer ( see corresponding paragraph).

There is no answer to this question. However, in many Diptera families, such as the Syrphidae, the eyes of males are more distant than those of females. This characteristic basically suggests a functional role selected during evolution. Diopsidae flies, like those of the Richardiidae family (see photo 4), grow to the extreme. It is therefore possible that pressure, an ecological factor specific to these insects, leads to natural selection in favour of eye movement at the tip of the eye peduncles.

Many hypotheses are proposed:

The presence of phylogenetically close monomorphic and dimorphic species demonstrates the existence of selection pressures other than sexual selection.

The number of ommatidies per eye varies greatly between species, from less than ten to more than 20 000 in some Beetles ! 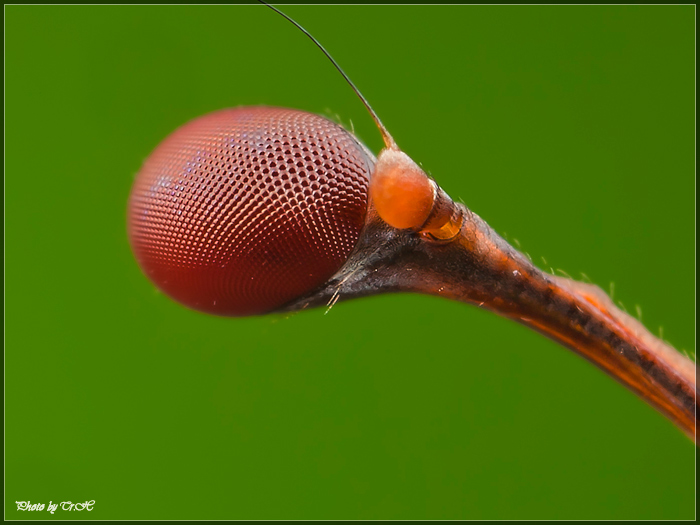 L’anatomy and the functioning of compound eyes will be the subject of future articles.

While the appearance of the first Diptera would go back more than 200 million years, the anatomy and functioning of the visual system between the different families of flies remained similar, even between phylogenetically distant species.

Contrary to what one might believe by observing the anatomy of Diopsidae, the organs composing the eye : the retina, the basal lamina and the bulb of the compound eye (see framed and photo 5) and the structure and organization of photoreceptors (photon-sensitive cells), are identical to those of other families of flies.

The compound eyes (lire this article) of Diopsidae flies, however, consist of a greater number of ommatidies than most other families: 2,600 in males and 2,500 in females of C. whitei for example, and they also have a higher photoreceptor density.

When the photoreceptor cells of the ommatidies are stimulated, a nerve impulse (message) is transmitted to the central nervous system (brain) via of the neuronal axons (optic nerve) that connect the two organs (read this article). In flies in general, one of these axons is connected and transmits nervous information from 16 ommatidies.

In Diopsidae, two particular adaptations appeared during evolution following the lengthening of the ocular peduncles. Indeed, the volume available for the passage of these axons is limited.

The gap between the eyes, coupled with a large number of ommatidies and a high density of photoreceptors, generates large amounts of information to be transmitted to the brain when the insect moves (see photo 6). To maintain the speed of transmission of these nervous messages, natural selection has favoured the emergence of axons with large diameters, thus reducing the space available in the eye stalks. To respond to this second constraint, evolution has multiplied the connections between ommatidies and axons: thus, each axon is connected to 64 ommatidies.

A physiological adaptation consists in wrapping these axons by a perineural sheath and by air sacs in order to optimize the effectiveness of nerve cells by providing more oxygen and nutrients. This adaptation is also found in all mammals.

The observation of the flight of certain species, as Cyrtodiopsis quinqueguttata, showed a relative slowness compared to species of other families, perhaps reflecting certain limits of the nervous system or in the control of aerodynamics (read this article).

Despite a good visual acuity and a good transmission of nervous information, the singular morphology of their cephalic capsule causes many constraints such as

Scientists have thus discovered a mechanism of compensatory co-evolution of the lengthening of the ocular peduncles. Males have larger wings, a larger thorax and more developed flying muscles (read this article). However, these adaptations are absent in monomorphic species such as C. quinqueguttata. The correlation between the length of the eye peduncles and the development of the flight organs indicates that natural selection also acts on a whole set of genes.

These scientists have also shown a phylogenetic specificity of the wing shape. Although the phenomenon of wing size increase occurred in all genera, the shape of the wings underwent adaptive pathways specific to each genus, for example ( see Figure 1 and 2):

Figure 1 : Deformation grids between the wings of flies of different monomorphic and dimorphic genera – Variations have been multiplied by a factor of 3 to improve visual interpretation – The points corresponding to the nodes of the wing ribs in figure 2 (Source : Husak et al., 2013)[/caption]

The modification of the shape of the wing caused a displacement of the ribs (read this article), their thickening in some places, but also a change in the position of the wing cells in response to aerodynamic stresses to strengthen and stiffen the component to avoid its folding during flight ( see figure 1 and 2).

To understand the morphogenesis (placement of different organs) of embryonic eye stalks in Diopsidae, an American team, led by Elke E. Buschbeck (2001), monitored the larval development of Cyrtodiopsis whitei and compared it to Drosophila melanogaster. The Drosophila is the most studied fly species in the world, both anatomically and genetically: it is phylogenetically close to Diopsidae.

Scientists have highlighted the existence of differences mainly in chronological order. The organs of the visual system of Diopsidae appear earlier in development than in Drosophila ( see figure 3 opposite).

Larger optical lobes in C. whitei because of a higher number of ommatidies (2 500 against 750 in D. melanogaster) cannot grow laterally as in Drosophila, but move backwards along the head.

Simultaneously with the movement of the optical lobes towards the back, the ocular peduncles, the optical nerves and the cuticle thin and lengthen, but by lack of space, these organs bend and undulate.

In the end, the embryonic development of Diopsidae is twice as long as that of Drosophila because of the growth of the ocular peduncles. It has indeed been shown that individuals of C. whitei with the shortest peduncles grew faster than their congeners.

At emergence, the lengthening of the ocular peduncles is not done by cellular multiplication but only by the extension of the cells in place. A process that raises a question: What are the anatomical and genetic mechanisms that predefine the final length of the eye peduncles? Although the principle of lengthening the cuticle and organs by extension is common in insects, it is spectacular in Diopsidae flies. When the insect emerges from its pupa (chrysalis), it absorbs air which it carries into the eye stalks, which, under pressure, stretch like balloon balloons. During this stretching, the eye lobes rotate back-ventrally by 45°, which can cause various malformation problems and make the fly completely vulnerable to hazards. The insect thus remains motionless during the entire period (30 min) of the rotation and solidification process of the cuticle (see video).

The brain, for its part, is structurally identical between the two species.