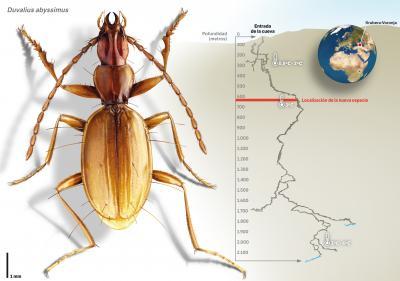 The ability of insects to colonize and adapt to extreme environments and inhospitable habitats is increasingly surprising. The discovery of a beetle from the depths in the Krubera-Voronja underground galleries of the Arabika massif (Caucasus) bears witness to this. This carabic, Duvalius abyssimus, was collected at a depth of nearly 60 m during an exploration expedition led by a team of Ibero-Russian speleologists between 2010 and 2013.

The cave beetles were, historically, the first species adapted to underground life described. These insects make up an important part of the biodiversity of these habitats with a high rate of endemism: they constitute for that an interesting model of study of the evolutionary history and the adaptation of these species to this type of singular environment.

While these species have different external morphological characteristics, their determination is based on the study of their genitalia (male copulatory organs). However, a taxonomic revision of this kind is necessary to clarify its complexity.

The genera Duvalius and Trechus are closely related (Trechini tribe) and present in the same geographical region. The species of these two genera are differentiated by the study of genitalia, endophallus (inner wall of the genital organ) and pubescence of the tibias.

A new species of the genus Duvalius : Duvalius abyssimus (Reboleira1,2 & Ortuño<3, 2014) was recently described following a speleological exploration mission carried out by an Ibero-Russian team between 2010 and 2013 in the underground galleries of the Arabika massif, west of the Caucasus ( see photos opposite/em>). Collected at a depth of 60 m, the two specimens (one male and one female) open new perspectives on the knowledge of the cave entomofauna.

Duvalius abyssimus is the third cave species of the genus described in the western Caucasus region. The other two are: D. miroshnikovi (Belousov & Zamotajlov, 1995), known from the Bariban and Sochi caves, and the Alek massif in Russia; D. sokolovi (Ljovuschkin, 1963) also occurs in the Arabika massif.

The Krubera-Voronja cave reaches a depth of 2140 m (it is the deepest known in the world). At the place where the specimens were collected (-60 m), the temperature is 3°C and the humidity is 100%. Despite these adverse conditions, other arthropods have colonized these galleries with varying degrees of adaptation: the pseudoscorpion Neobissium (Blothrus) birsteini (Lapschoff, 1940) which is the main and most widespread predator at this location where it cohabits with opilion Nemaspela (Silhavy; 1966) and the spider Troglohyphantes (Joseph, 1881), only found on the upper parts of the cave.

The species presents external morphological adaptations related to underground environments characterized by the total absence of light: reduced eyes (here limited to a few ommatidies, lire this article) and long, fine silks all over the body. The sense of touch replaces that of sight which has become useless.