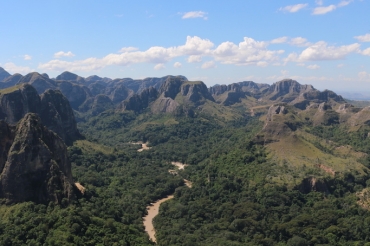 Return from the Makay massif since May 1st: this report is posted late, please excuse me, because of a change in professional life that followed immediately (still in insects), leaving little room to tell you this adventure at the end of the world – which really exists, I confirm ! –

The adventure begins on Sunday April 10 when the teams of Naturevolution pick us up at the hotel Jacaranda in the center of Antananarivo : Antsirabé, for a night at Soa GuestHouse. Followed by a day of 12h drive (comfort uncertain) in 4×4 to rally the city of Ranohira 521km further south. After a short night at Momo Trek, destination the village of Beroroha which will require 13h of track and the crossing of the Mangoky river, using a makeshift boat. Finally, the next day (Wednesday) in the late afternoon and after still a few hours of tracks, here we are in the village of Beronono, at the gates of the Makay massif that we have in visual ! 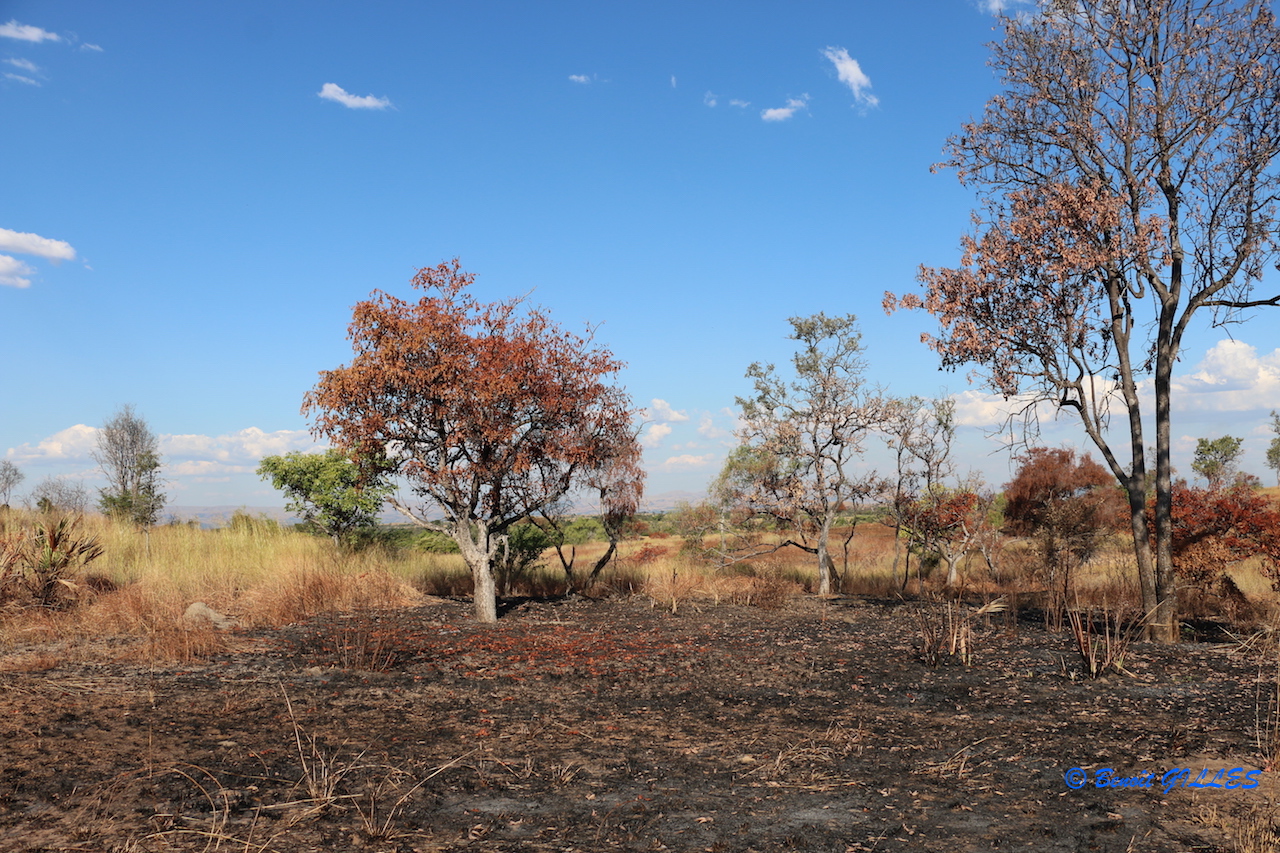 First observation, although the region is remote and difficult to access, anthropic pressures, particularly bush fires, are visible and are gradually eating away at the forest to the detriment of a savannah as far as the eye can see. The indigenous populations use the burning technique to promote the regrowth of young herbaceous stems on which their zebus feed. Lack of control and drought allow flames to spread for square kilometres and days.

On entering the Makay massif, on foot from now on, you will discover a rich, wild and unique nature, preserved within a rocky labyrinth that is breathtaking and breathtaking landscapes ! Each day of walk brings its share of discoveries, wonder, observations of a rare fauna and flora but also rich and friendly human exchanges with people of the group and the local populations.

Growing deeper and deeper as the days go by, following the guides, the Naturevolution camp looms on the horizon, located on the right bank of the Menapanda River, 4 hours walk from the village of Stivoko. It will be our base for the next 5 days. 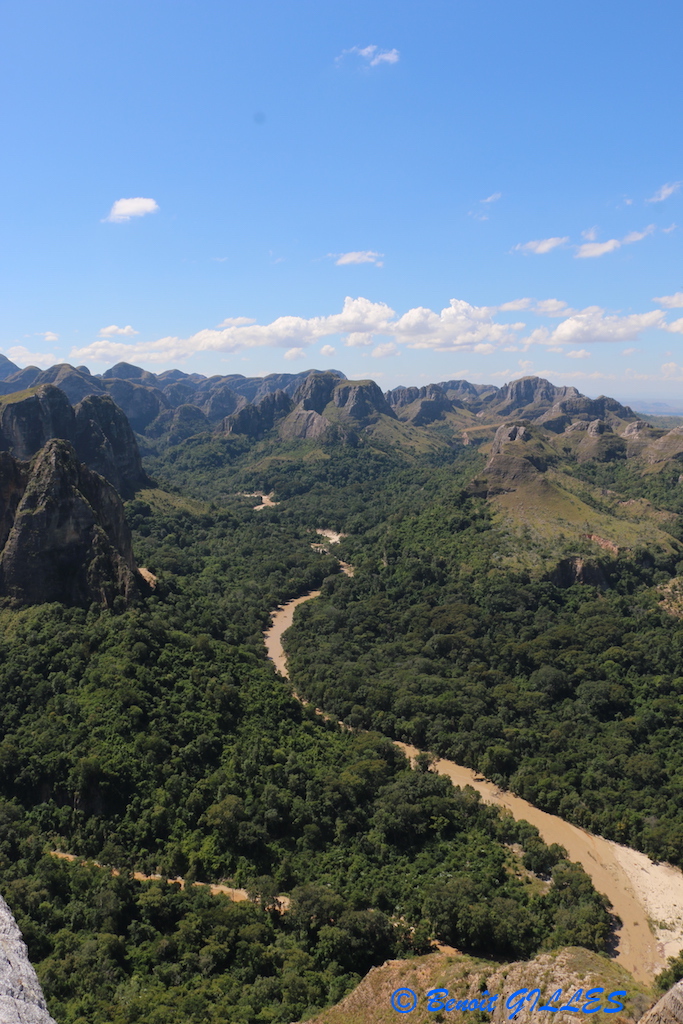 Panorama of the Menapanda River, base camp and rock labyrinth of Makay (Source : © B. GILLES)[/caption]

During these few days cut off from the world, the exploration of canyons ever narrower, deeper and wetter, and summits ever higher and drier, is an intense experience both physically and emotionally : the spectacle that nature offers is simply grandiose. We were given the opportunity to explore for two days, including one night under the stars, with the bare minimum. Sleeping in this nature, whose strength and vulnerability you feel at the same time, reinforces the feeling of really being at the end of the world and of experiencing a rare and exceptional moment.

After a two-day stay in the village of Stivoko and a memorable football game with the children, the return starts on Tuesday 26 April. One last night on the sandy banks of the Mangoky then the modern world returns little by little: Ranohira, Antsirabé and finally Antananarivo on April 29.

The feeling is ambiguous: happy to have been able to live this incredible adventure but also sad to leave such a captivating atmosphere, team and nature.

Rehabilitation to the modern world was a bit difficult: several kilos less, a spirit partly remained in the Makay, resumed a life where the notion of time takes all its meaning. 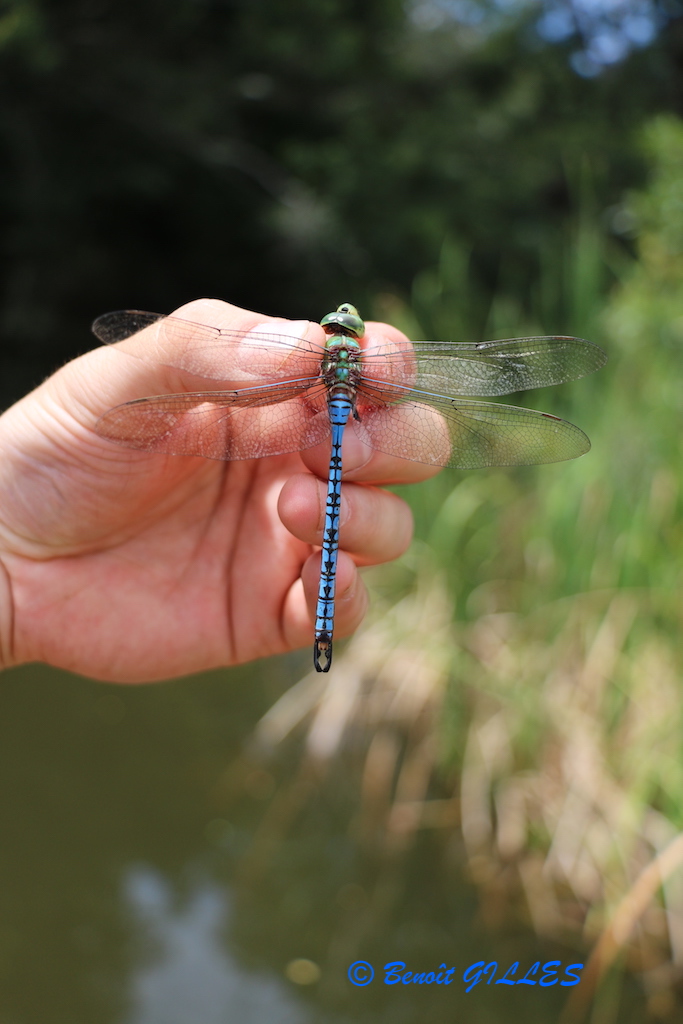 Capture an Odonate and take a picture for later determination (Source : © B. GILLES)[/caption]

My mission, as entomologist, was to collect the entomofauna during our passage in the remote sites of the Makay massif. Due to an early dry season, the migrating locusts, already in flight, were a month early, and a full moon period throughout the stay, the environmental and climatic conditions were in the end, alas, not very favourable to the presence of a great diversity of insects. However, nearly 200 specimens from several orders and families (Hemiptera, Diptera, Carabidae, Formicidae, Vespidae…) were collected.

The Makay massif remains in its majority little studied, offers a possible opportunity to bring unpublished data for science.

A long work remains to be done : description of the individuals and determination of the species, with the hope of discovering new species, then publication of the results.

For that, scientists and entomology enthusiasts, specialists of collected families and wildlife of Madagascar, will bring their skills and contribution to this project. The inventory is in progress and the first studies of the specimens may begin in the coming weeks.

You will be informed about the progress of this work.

I would like to thank all the people who have given their help, support, confidence and professionalism to the realization of this exploration mission, this adventure and have allowed me to live this experience both scientific and human. Your contribution will enable the actors involved on the spot: Naturevolution and PlusActions Projects, to work for the preservation of this region and to support the socio-economic and eco-touristic development of local populations.

Recommendation of work and DVD on this theme