of a unique morphology among long horn beetles (long antennae), its biology and ecology remain a mystery and it remains, since its discovery, an entomological curiosity.

The range of Hypocephalus armatus is limited to a small area of eastern Brazil, mainly in the state of Minas Gerais, north of Rio de Janeiro ( see map 1 opposite).

Described in 1832 by the French zoologist Eugène Desmaret (1816-1889), Hypocephalus armatus has seen its systematic position evolve regularly. Because of a singular morphology among the Beetles (see next paragraph), entomologists, not knowing in which family to place the species, have transferred it from one taxon (definition) to another many times. The American entomologist John Lawrence LeConte (1825-1883), world-renowned for describing thousands of insects during his career, said in 1876: “Of all the Beetles known to science, no species has caused so much uncertainty as to its systematic position” (The Book of the Beetle – p516).

Hypocephalus armatus is currently included in the family Vesperidae which includes 17 genera and 80 species. This family is divided into 3 subfamilies:

The Belgian entomologist Auguste Alferd Lucien Lameere (1864-1942) proposed in 1902 to place Hypocephalus armatus in Anoplodermatinae on morphological and ecological characters close to other genera as Migdolus. After being incorporated into the Anoplodermatini tribe by the American Manuel Martins Dias in 1987, the species has recently found the Hypocephalini tribe, created by the French Charles Emile Blanchard (1819-1900) in 1845, of which it is the only representative (Bousquet et al., 2009 ; Bezark & Monné, 2013). 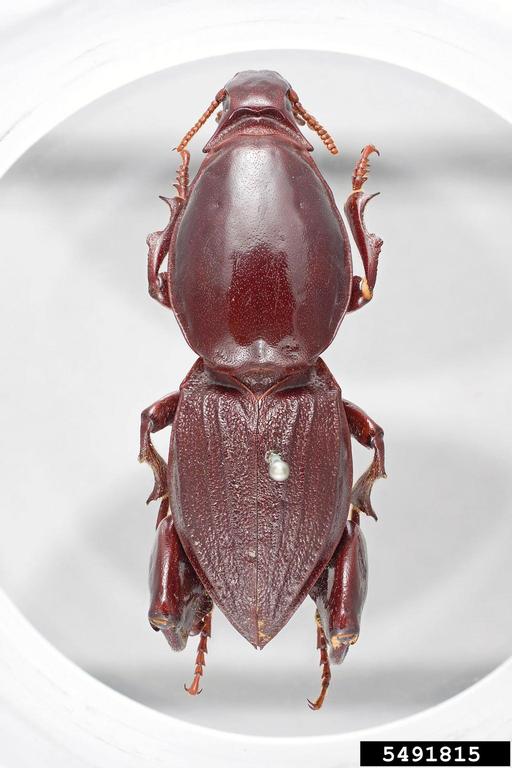 Hypocephalus armatus measures between 33mm and 55mm, even more in some specimens (70mm). The cylindrical body is covered with a thick cuticle (read this article) of black to brownish colour and short, scattered hairs. It resembles the courtilières (Orthoptera – Gryllotalpa sp.) that we meet under our latitudes even if the two insects do not belong to the same order (see photo 1 opposite). This similarity results from an evolutionary phenomenon called evolutionary convergence : similar adaptations (behavioural, morphological, physiological) of species evolving in the same ecological niches.

The main anatomical characteristics of the species are

Nearly all of the biology and ecology of the species remain unknown to scientists.

A unique case in long-horned beetles, the species carries out its entire development cycle underground, adults having a burrowing lifestyle. Adults emerge at the beginning of the rainy season in December, and are sometimes observed moving on the ground or sheltered under plant debris or rocks. Only the males seem to come out of the ground in search of sexual partners, the females remaining buried. Observation of individuals during the day suggests that the species is not necessarily nocturnal (see video at the end of article).

Hypocephalus armatus, which does not seem rare locally, prefers open environments, with a low vegetation cover, composed of bushes, sand and quartz fragments.

The larvae are totally unknown : their development must take place in the soil where they feed on plant matter (root, dead wood) like the larvae of other members of the family.

To discover another strange beetle species, also of the Cerambycidae family, I invite you to follow this link Onichocerus albitarsis.

Recommendation of works on this theme :