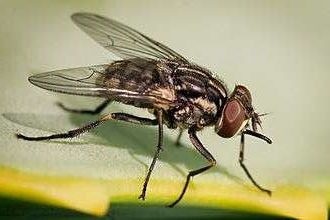 Among the ectoparasites that are a nuisance to livestock and livestock in general, there are, alongside ticks (Mites), several families of Dipterans (Insects). Horn stomoxes and flies (Diptera, Muscidae) and taons (Diptera, Tabanidae) are certainly the most important (photos 1, 2 and 3), due to the nuisance spawned and the possible transmission of pathogens by these hematophageal insects (feeding on blood).

We will see in the rest of this article elements on the biology and ecology of stomoxes, their impact on animal health, and the means available to control their populations. Horn flies and horseflies will be considered in future articles.

The stomoxes (genus Stomoxys) belong to the family Muscidae and to the subfamily Stomoxyinae (Table 1 below). The classification within the animal kingdom is as follows:

They are cosmopolitan insects that can be found in cold and temperate climates in Europe and North America as well as in hot climates in Africa, Asia and South America. These flies are considered to be major nuisances in cattle and horse farms, but they are also encountered in pig, poultry or rabbit farms.

The genus Stomoxys comprises 18 species of which 12 are known only in the Afro-tropical region, 4 only in the Eastern region, one species (Stomoxys sitiens) is present in both the previous two regions, and the species Stomoxys calcitrans (stable fly or stable fly in English) is cosmopolitan (Table 2). It is the latter species that is the most studied because of its subsistence to farming activities. Its impact on the livestock industry in the United States has been estimated at US $ 2.2 billion per year (Taylor et al., 2012).

A phylogenetic study was carried out by N. Dsouli in my laboratory in 2010 by analyzing gene sequences from 11 of the 18 Stomoxys species. Until this work, the stomoxes were considered to originate from Africa, taking into account the number of species present on this continent (Table 2).

The study showed that all the species analyzed were sisters of the species S. indicus, which thus appears to be the oldest. This species is only known from the Asian continent. It therefore seems that the stomoxes appeared rather in Asia and then migrated to Africa where they diversified.

N. Dsouli also carried out a phylogeographic study of the only cosmopolitan species S. calcitrans by comparing populations from all continents with the exception of Australia. There has been a clear separation between the populations of Asia and those of the rest of the world. We wonder if the populations of Asia still belong to the same species, or if we are not faced with a phenomenon of speciation by geographic isolation. Analyzes are currently continuing on this subject in collaboration with an American laboratory.

The adult stomox (S. calcitrans) is 5 to 7 mm long and has morphological characteristics similar to those of house flies (Fig. X). It is distinguished by the existence of a small, forward-pointing, suction-nozzle type (called proboscis) (figure 1).

This fly is grey-brown, the chest is marked with 4 longitudinal black dorsal bands, and the abdomen, wider than long, has median black spots and rounded lateral spots. The wings are translucent and the central longitudinal rib shows a less marked forward stall than in the house fly (figure 2).

Adults live on average between 4 and 5 weeks. They can overwinter in heated breeding sites and thus maintain breeding activity throughout the year.

Females make their first spawn about 9 days after emergence. Under favourable conditions (25oC) the eggs hatch in 1 to 3 days. Larvae are apod maggots and almost cylindrical. They feed on decaying organic matter. This larval phase consists of 3 stages and lasts between 7 days at 30oC and 11 days at 25oC.

At the time of pupaion, the stage 3 larva looks for sites where the temperature is 15-20oC and the relative humidity of 70-85%. The larva then locks in a cylindrical capsule called puparium. This phase lasts about 7 days at 25oC. The full development cycle takes place in 19 days at 25oC, 90 days at 14oC and 130 days at 10.5oC (figure 3).

Male and female stomoxes are hematophageal. They mainly attack ruminants (cattle, sheep, etc.) and horses, rather than humans. They can also feed on birds. Blood is needed for reproduction: development of the ovaries in females and seminal fluid in males. But for energy needs, especially flight, these flies also feed on nectar and/or vegetable secretions (sap).

One of my Gabonese students (J.F. Mavoungou) studied the seasonal activity and distribution of different species of stomoxes in the equatorial forest around Makokou in eastern Gabon. He had the idea of setting traps in the canopy at 30 m high, and he found that a very little-known species, S. xanthomelas lived there at this height in the trees. Analysis of blood meals showed that many of the meals of this species were taken on monkeys, but that sometimes this fly could also sting humans by coming to ground level.

We think that there is a real danger, because with the intensification of development in this region (Makokou – Gabon), contact with humans will increase and this fly could well be the vector of new pathogens between monkeys and humans .

Stomox populations show seasonal activity (phenology) dependent on outside temperatures. With the current global warming, these flies are active outdoors in Toulouse from mid-February to the end of November (Chart), whereas they only appeared in April-May only a few years ago. As soon as the outside temperature exceeds 10-11 degrees Celsius, the flies are active. There is a peak in abundance in late spring-early summer (weeks 23 to 29), a decrease in the number during the summer, and a second, larger peak in the fall (weeks 45 to 49).

These flies harass animals for their blood meals, prevent them from feeding and thus cause a decrease in daily weight gain (reduction of more than 13% as soon as there are 50 flies per cattle) or milk production (reduction of 0.7% per stomoxe per cattle).

In addition to these nuisances, stomoxes can transmit pathogens from an infected animal to a susceptible healthy animal: vector role. Stomoxes were once known as anthrax flies because they can transmit the bacterium Bacillus anthracis, a anthrax agent.

In France, our colleagues at the National Veterinary School in Toulouse (ENVT) have shown that these flies can also transmit to cattle the protozoan Besnoiti besnoiti, agent of besnoitiosis (Lienard et al., 2013; Sharif et al., 2017). This pathology, once known only from the Pyrenean foothills, spread to the north of France during the movement of animals.

Stomoxes can also transmit Helminths (worms), as are parasites of the digestive tract of Equids: Habronema megastoma. This parasitosis occurs in southern regions, but is infrequent.

In tropical regions, these flies are responsible for the transmission of many other pathogens, for example: trypanosomes (protozoans), Dermatophilus congolensis (bacteria), contagious nodular dermatosis virus. The latter virus is of concern to the European authorities. This contagious nodular dermatosis, known in English as Lumpy Skin Disease, is at the gates of Europe (Photo 4).

I had the opportunity to visit a few years ago, thanks to an Ethiopian student who supported his doctoral thesis at the Veterinary School of Toulouse, several outbreaks of this disease south of Addis Ababa. Stomoxes are known to play a role in the transmission of this virus, but the epidemiology of this disease is not yet fully understood. However, in August 2015, this pathology was first seen in Greece. Bulgaria, Macedonia and Serbia reported the first outbreaks in the spring of 2016, and at the end of June 2016, Kosovo also announced a first case of LSD. The virus has continued to spread to affected areas.

European authorities say that identified outbreaks in the Balkan region have dropped by 95%, from 7,483 homes in 2016 to 385 in 2017. These figures confirm that livestock vaccination, recommended by EFSA in 2016, is the most effective way to contain the disease. This concern should also encourage our officials to support research on methods of controlling stomoxes.

For a long time the control against these flies was carried out with insecticides. First DDT and related products, until they were banned, then new molecules from the 1970s, to the synthetic pyrethroids currently. But our colleagues at the ENVT have shown that some populations of stomoxes, subject to constant insecticide pressure, are now resistant to all available molecules (Salem et al., 2012; Tainchum et al., 2018).

Assessments are ongoing, including for innovative traps that will be used where populations are resistant to insecticides. Traps should be as effective as possible for stomox capture, and as selective as possible by not capturing other insects.

Screens developed as part of the FlyScreen project have been set up on several farms in Thailand and are working well by severely limiting the apparent density of stomoxes, which are still highly sensitive to the insecticides used. The same is true in sub-Saharan Africa, where glossines (tsetse flies) are also highly sensitive. But on the campus of the Veterinary School of Toulouse, where it is known that stomoxes are particularly resistant to all usable insecticides, the screens are ineffective, hence our interest in the evaluation of trapping system.

The fight against stomoxes is made difficult for several reasons: these flies only stay on the animal for the time it takes to eat their blood meal, they then rest in the vegetation to digest and their dispersion in space does not facilitate Not their control; breeding and larval development sites are also very varied: decaying grasses, manure piles when there is a lot of straw, hay bales when there is high humidity….

In Costa Rica, where I was brought on a mission because of observed stomox outbreaks in pineapple plantations, we found that female flies come to lay eggs on the plant material that remained on the ground after the fruit was harvested. This extremely favourable environment resulted in very high fly densities and a terrible nuisance for workers and livestock in the area.

Similar situations occur in southern Brazil in sugar cane plantations, or in Western Australia around Perth in vegetable plantations. The idea is to stop burning these plant residues so as not to send more CO2 into the atmosphere, but to incorporate them into the ground. Good idea at first sight to return organic matter to the soil, a project supported by an international initiative (4 per 1,000). But in the countries mentioned above, tens of thousands of hectares have been planted.

Costa Rica, a small country, has become the world’s largest producer and exporter of pineapples. Huge masses of decaying plant matter are very favourable to flies. We have formed a consortium with the Americans, Costa Ricans, Brazilians, Australians and ourselves to discuss and propose methods of control adapted to these situations.

Biological control by releases of parasitoids, mechanical control by deployment of screens, attractive and selective traps, deep burial of organic matter are some of the methods to be integrated into a nuisance control program. Research is still needed, in particular on the development of attractive effective products on the one hand (for trapping) and repellents on the other (protection of humans and animals) that would allow the development of a method called “push-pull” by Anglo-Saxons.

These flies are a major nuisance to livestock and agriculture and research is still needed to develop effective and environmentally friendly control methods. It is regrettable that university courses in entomology have disappeared in France.