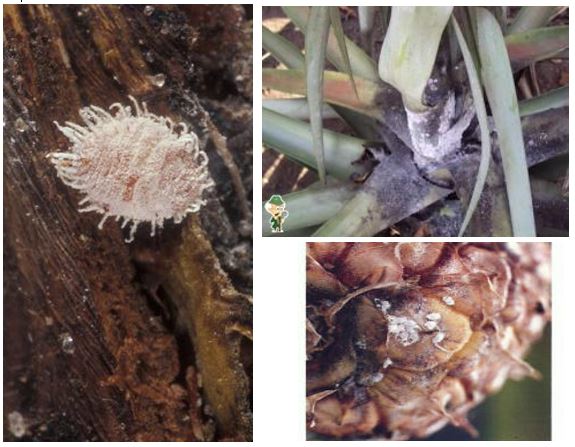 The scales from the vast superfamily of Coccoidea, rich of over 8,000 species and 33 families (and 16 fossils) (link). Like their sternorrhynchan cousins (aphids, whiteflies, and psyllids), they feed on plant saps using a piercing-sucking mouth apparatus.  Their very diverse and sometimes astonishing biological and morphological peculiarities foster numerous studies.

Thus, several different cases of parthenogenesis have been described. Adult females are wingless and neotenic, resembling larvae (larger), while males are winged and lacking functional mouthparts, thus unable to feed; in fact, they live only a few days devoted to the encounter of sexes.

On the other hand, if many species are mobile throughout their lifetime (Pseudococcides, or mealybugs), others remain fixed on their host plant, either at the sole adult female stage (Coccids, or soft scales) or almost throughout live (Diaspidids ) ; this strong relationship with the plant and their cryptic lifestyle also earned them the name “Gallinsectes” given in 1758 by Réaumur.  Finally, some scales are beneficial to us, by the production of “cochineal red” (Dactylopiids and Margarodids), lac (Kerriides) and wax (some Coccids), and even honey resulting from the transformation of their honeydew by bees.

Another major reason to study these discrete insects follows from their formidable ability to cause direct damage to crops, often on perennial and especially in Mediterranean and tropical regions, where their species diversity is the greatest. Their food uptake and their prolific character can deplete the plants and reduce or deform the fruits. Let’s only cite the Australian fluted scale Icerya purchasi (Monophlebid) and the California scale Aonidiella aurantii (Diasp.) citrus pests, as well as the San Jose scale Comstockaspis perniciosa (Diasp.) and the Maritime pine scale Matsucoccus feytaudi (Matsucoccid). These species were formely the subject of pioneering work in biological control, particularly at the Antibes Station.

In addition to this direct action, some insects can transmit viruses to different cultures. This vector ability is less known than for aphids, which are vectors of more than 300 different viruses, or for other Hemipterans such as leafhoppers and planthoppers transmitting phytopathogenic virus and bacteria. Several species of Pseudococcides are known to be vectors of cacao viruses in West Africa, since the pioneer work of the British A.F. Posnette in the 1940s. Since then, 30 species of Pseudococcides and Coccids have been identified as vectors of some 30 different viruses, and the list appears to be lengthening. In addition to cacao, the main crops affected by these pests are grape vine, pineapple, banana and cherry tree.

Among the 60 different viruses known on grapevine in the world, the most damaging are undoubtedly those causing fanleaf disease, transmitted by nematodes, and leafroll: Grapevine leafroll-associated viruses (GLRaVs). GLRaV-1,-3, and-4 (genus Ampelovirus) are transmitted from vine to vine by Pseudococcids and Coccids scales.  Like all pathogenic viruses and bacteria of grapevine, they are first transmissible by cuttings and grafting, i.e. the agronomic propagation mode of this plant. The planting material not adequately verified from a sanitary point of view introduces the virus into the vineyard.  If potential vector are present, the plant-to-plant spread of the virus may be initiated, especially along the rows.

Contamination is also common when a young plot is implanted in the vicinity of plots that are both virus-infected and insect-infested. The rate of spread of the disease varies according to the climate and the cycle of the vector: thus, scales are monovoltins in Northern vineyards (Alsace, Champagne), and plurivoltins under Mediterranean climate (California, South Africa). The scales, although not very mobile, can move from one plant to another when the twigs cross each other, and sometimes can be transported by ants (symbiosis), whereas the wind can transport small larvae between plots (our work).

The transmission of ampeloviruses by scale insects occurs in the “semi-persistent non-circulating” mode. This means that the vector remains infectious (able to inoculate the virus it has acquired) several hours or days, and that the virus is retained on the ectoderm surface (inside of the stylets and/or buccal cavity) without crossing an epithelium. In the host plant, Ampeloviruses are restricted to phloem tissues, which conduct the sugary phloem, and the vector acquires the virus particles while taking this sap up. Then on the occasion of a later food take on a new plant, these particles can be inoculated during the salivation associated with the sap ingestion. In addition, viruses in the genus Vitivirus involved in the “rugose wood” syndrome of grapevine are also transmissible by the same scales insects, often in association with the ampelovirus.

In order to protect the grapevine from the leafroll disease, it is strongly recommended to plant only healthy material (rootstock and scion), according to the sanitary certification scheme set up in France (Institut Français de la Vignes et du Vin, IFV) and in most wine-producing countries. An insecticide treatment, at the time when young larvae hatch in spring, can be advised only when a plot is both leafroll-infected and highly infested with scales insects.  A New Zealand study recommends the roguing and replacement of diseased plants, or even the complete roguing of the plot if the rate of symptomatic cplants exceeds 20%. Finally, it is important to make winegrowers better aware about the leafroll disease.

The disease of the “shoots swelling” of cacao appeared after the introduction in West Africa of this tree of South American origin (early 20th century).  The Cacao swollen shoot virus (CSSV, genus Badnavirus), virus presumably present on native species (Baobab, etc.), was then transmitted to the cacao by mealybugs, as demonstrated since then, and “enjoyed” it and disseminated so much that an intense epidemic occurred in the 1930-1940s, necessitating the roguing of millions of infected trees in 1946-47, especially in Ghana.  Studies have shown that about 20 species of Pseudococcids are able to transmit CSSV between trees.

Another tropical crop of economic importance, banana is susceptible to “streak disease”, caused by several related viruses (genus Badnavirus). Intriguing feature for virologists, these viruses exist in two forms: the first called “episomal” consists of “normal” particles, which move along the plant sap ducts and are acquired and then inoculated by several Pseudococcid species whereas the second form called “endogenous” exists in the form of DNA integrated in the banana genome, thus transmitted to the progeny (“vertical transmission”) and able under certain conditions to evolve into the episomal form which will then induce the disease and be transmitted by vector (“horizontal” transmission”).

Finally, a “dieback” is known in pineapple, more precisely the “pineapple mealybug wilt“, a name that already indicates the implication of mealybugs. Frequent in Hawaii from 1925 but now present in all producing countries, this syndrome has long been attributed to the saliva of the mealybug (phytotoxemiasis), before the detection (1989) of several ampeloviruses called Pineapple mealybug-wilt associated virus (PMWaV)-1,-2 and-3 all transmitted by Pseudococcids in the genus Dysmicoccus, and more recently PMWaV-4 and-5 (unidentified vector) and even two badnaviruses also with mealybug vector. The complex etiology of the disease has not yet unveiled all its secrets.

Although still poorly known, the virus transmission of scales insect is an exciting issue for virology and entomology. Several common features emerge from the few known pathosystems. Firstly, all these models of virus – scales interactions obey the semi-persistent and non-circulating mode of transmission. Secondly, the phloemophagy of the vector and the restriction to phloem tissues of the viruses they transmit testify to a strong coevolution. In addition, the host plants are mainly woody (except pineapple), which also form a large proportion of the host ranges of scale insects. Finally, except for CSSV, the syndromes are obviously associated with several viral species, belonging to either the same genus or distant taxa, which complicates the etiology of the diseases and elicits active research on the mutual interactions between these viruses and their effects on vectors and on plants.  All this bodes well for new future discoveries on this topic.