Insects are the first organisms to have developed the ability to fly, 170 million years ago (lire article on phylogeny). The acquisition of flight was a major innovation in their evolution: it gave them a decisive advantage such as escaping predation, fleeing a hostile environment to seek a more favourable one and also meeting individuals of the opposite sex for reproduction.

Contrary to the vertebrate wing, the insect wing has no intrinsic muscles (inside the organ), it is attached to the thorax by a complex set of articulated elements called pteralia (lire th article on wing anatomy).

Despite important research on insect theft, it is still little explained because it is difficult to observe because of the size of these animals and the speed of their movements. It remains a complex and vast subject. With this article, I wanted to synthesize three essential points to allow you to learn more about: aerodynamics, musculature and the control system.

I) Wings and aerodynamics

Insect flight is much more complicated than that of aircraft, which is based on 2 principles:

The physical principles conditioning flight are based on fluid mechanics because a gas behaves like a viscous liquid.

In insects, the wing is flat and has an angle of attack of 30-40°, well above 15° How can they stay in flight in these conditions?

Contrary to received ideas, insects, except dragonflies, do not flap wings from top to bottom, but practically on a horizontal plane from front to back (sinusoidal movement). When the insect beats the wing, it forms a “leading edge vortex”: an air vortex at the leading edge of the wing which causes a suction phenomenon perpendicular to the wing surface (see figure 1). The angle of attack being higher than 15°, the insect stalls immediately, starts a fall which will be very quickly compensated by a new beat.

The insect is thus maintained in flight thanks to very high frequency wing flapping but this phenomenon alone is not enough to explain its flight.

Figure 1 : A) Formation of the vortex” width=”741″ height=”201″ /> Figure 1 : A) Formation of the “leading edge vortex” at the wing angle of attack, B) The red vector corresponds to the sum of the forces present during a wing flapping cycle, forces and movements decomposed to the right (Source : M. Dickinson (2011) – Insect flight – Current Biology – Modified by B. GILLES)[/caption]

At the scale at which insects evolve, the viscosity of the air also comes into account.

The aerodynamic performance of the wing and the lift are related to the way the air, therefore the fluid, flows following the passage of the wing. This phenomenon is characterized by the Reynolds number : Re (see box). Thus, when Re is lower than 2000, the forces related to the viscosity of the air dominate, the flow is laminar (without turbulence), above 3000 the forces related to lift dominate and the flow becomes turbulent (with perturbations).

Given their size, speeds and air viscosity, insect wings have a very low Reynolds number, between 10 and 5000, for comparison, the Reynolds of an aircraft wing is several million. These parameters give the insect an advantage by offering it a higher bearing capacity than larger Reynolds. 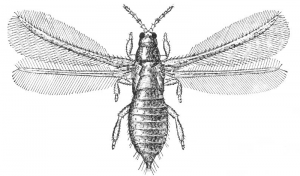 Evolution has led to miniaturization, less than 1mm for some species such as Thrips (Thysanoptera) or parasitoid wasps (Hymenoptera). At this scale, the physical laws are still different because the Reynolds is even lower and the viscosity is particularly high. These insects have particular adaptations on the wings, they are in the shape of “brush” with a ciliated fringe whose role is not yet elucidated. These structures would generate an excess of viscous drag ( see illustration 1 opposite).

In moving, the wing causes air disturbances and turbulence in its wake. During its return movement, the insect takes advantage of some of this energy and the forces generated to increase its lift and suction ( see figure 2).

The use of this phenomenon confers an advantage to the insect despite the fact that turbulence and disturbances complicate the control, sensitivity and handling of the flight.

While certain principles of aerodynamics apply to all insects, the particularities and adaptations go hand in hand with the morphological and behavioural diversity of species. Moreover, the wing is not only intended to fly the insect, it must also allow it to maintain a certain direction and speed while compensating for turbulence and drift due to air currents.

The study of the aerodynamics of insect flight must be related to their ability to manoeuvre and their behaviour for survival and reproduction.

The ability to fly was made possible by the appearance of a musculature both powerful and able to contract at very high frequencies. During evolution, there has been miniaturization in many families such as dipterans, hymenopterans, beetles, etc., which has led to a reduction in the number of children. Because of physical principles, the smaller the species, the faster they have to flap their wings to fight gravity. At this scale, air viscosity increases and aerodynamic performance weakens. Many anatomical and physiological adaptations are allowed to overcome these constraints.

Example : The wings of large butterflies like sphinxes (Sphingidae) beat at a frequency of 30Hz and mosquitoes at more than 1000Hz.

Or, the biological limit of the frequency of muscle contractions is below these values. How did insects get around this problem?

Reminder, the arrival of a nerve impulse carried by a motor neuron to a muscle cell causes a succession of events : 1) Release of calcium ions Ca2+ from sarcoplasmic reticulum (RS) 2) Binding of Ca2+ ions to a protein : troponin ; 3) This causes the displacement of tropomyosin ; 4) tropomyosin in turn releases myosin which can bind to actin, finally triggering contraction of the contractile fibers of the muscle cell (see video at the bottom of page).

This chemical chain is particularly fast because calcium has a very strong electrochemical force (it diffuses passively in the direction of the concentration gradient or electrochemical gradient). The return to the initial situation, the deactivation of the muscle cell, is rather slow because it calls for an active influx of Ca2+ in the RS (opposite direction to the gradient): this process limits the frequency of contraction of the wing muscles.

The muscles of vertebrates and some insect species have muscle cells with high RS concentration to offer speed, to the detriment of contractile fibers and mitochondria responsible for potency. There is therefore a power/rapidity compromise linked to physical and physiological constraints.

Thus, during the evolutionary history of insects, innovations have emerged to meet these constraints. One of the main ones is the appearance of new types of muscles, called “asynchronous” or motors. This innovation has occurred four times within the different lines.

These muscles, “indirect”, are not linked to the wings but are inserted into the inner walls of the elements constituting the exoskeleton of the thorax (lire th article).

The MDL contraction moves the wing forward, which activates the MDV and triggers the return movement ( see figures 3 and 4). This mechanism allows only one of the two muscle groups to be used at a time, and doubles the beat frequency.

Figure 4 : Diagram (transverse view) representing dorsal-longitudinal and dorsal-ventral muscles in a fly (Source : Encyclopedia of Insects – Modified by B. GILLES)[/caption]

These “indirect” muscles will provide sufficient power and mechanical energy to allow the insect to fly.

The control of the trajectory will be carried out by twelve muscles, called “direct” because connected to the base of the wing. These muscles, unlike the “indirect” muscles, are synchronous and are not capable of generating high forces and rapid contraction rates due to a sarcoplasmic reticulum concentration in their cells.

Figure 5 : Presentation of the wing base muscles controlling the direction of flight in the fly (Source: M. Dickinson (2011) – Insect flight – Current Biology – Modified by B. GILLES)[/caption]

By cons, they act very finely on the wing to modify the shape of its base, the kinetics and kinematics of its movement, which will allow the insect to change flight path. They play to some extent the role of the springs of the flaps located at the rear of the wings of aircraft ( see figure 5).

The flight requires the analysis of many parameters (speed of the animal and air currents, three-dimensional position in space, altitude, visual information…). Evolution has provided insects with a nervous system that is both fast and efficient.

Day-flying insects like dragonflies, flies, wasps and butterflies have a highly specialized nervous system: compound eyes and enlarged visual nodes whose role is to inform the insect about speed and altitude, allow landing and avoid obstacles or predators, as well as good spatial memory.

The insect analysis system is one of the fastest and most efficient in the animal world. Visual information processing operates at a frequency of 300Hz.

The flight control system is composed of:

Articles describing all sensory organs of the insect will be published soon. The one on cuticular sensory mechanoreceptors should be read here.

Figure 6 : Simplified diagram of the sensory motor pathways of the wing mechanoreceptors (in red), the dumbbells (in blue) and the visual information (in green), the integration of all this information is not yet well understood (Source : M. Dickinson (2011) – Insect flight – Current Biology – Modified by B. GILLES)[/caption]

A biological problem remains, however, for small species. The frequency at which the wings flap is far too fast to be controlled by the central nervous system (brain). The speed of nerve transmission of information and its analysis between the wings and the brain takes too long because of the many successive chemical reaction chains required. To remedy this problem, evolution has developed an autonomous thorax system based on reflex loops ( see figure 6).

The contraction of the steering muscles, located at the base of the wing, are directly controlled by motor neurons coming from the dumbbells (modified hind wings in diptera) and other sensory organs of the wing and its base informing about the flight parameters. Thus, the position, kinetics and kinematics of the wing are modified without the information processing having to move to the brain. This process allows to gain in speed, therefore in performance and efficiency.

The integration of these two nervous systems (central system and wings) is not yet well understood. Many areas of shadows remain.

A recent scientific study (2015) shows that in species without dumbbells, wings intervene in the detection and control of coriolis strength, they thus play the role of gyroscopes. For more information, read this article.

Studies on insect flight are part of an objective to design microdrones, less than 15cm, for civil and military needs. These machines must have the ability to hover and offer good manoeuvrability.

The beaten flight of insects seems to be the most suitable solution. Engineers work on biomimicry, which consists in drawing inspiration from biological models for the design of mechanical systems.