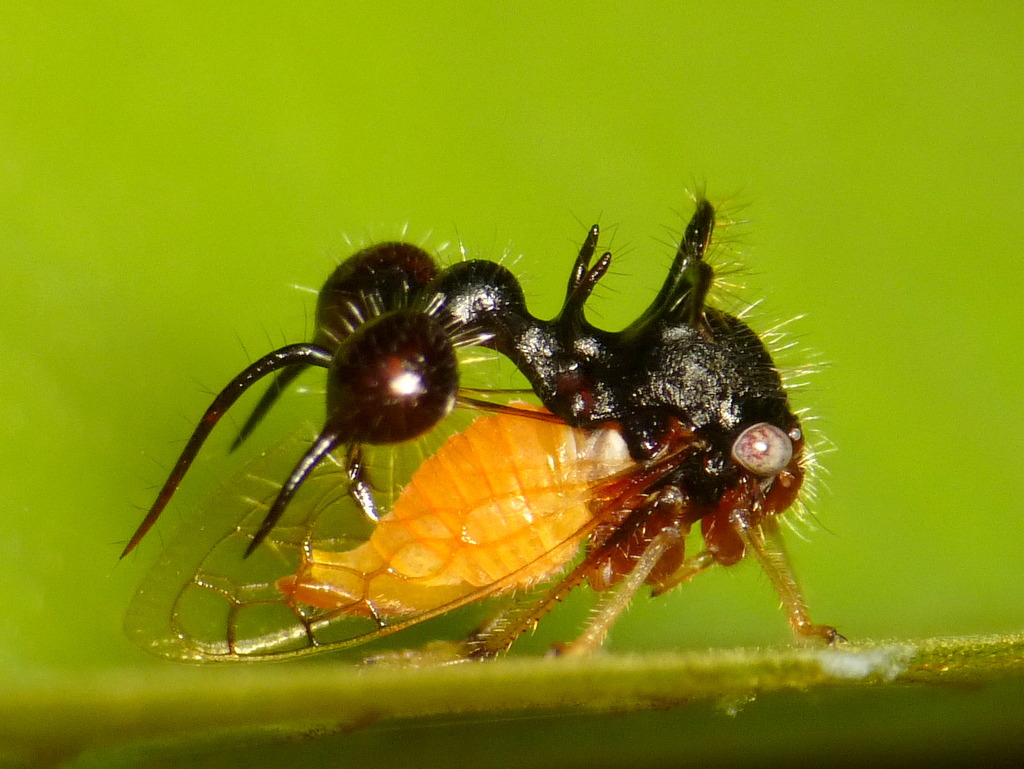 Membersracides are small insects belonging to the super-family Membracoidea and to the order Hemiptera : aphids, leafhoppers and cicadas, characterized by an incomplete metamorphosis (hemimetabolism : lire this article) and oral organs of the sting sucking type (lire this article).

These insects are known for the care they give to eggs and larvae, for their ability to make impressive jumps and especially for their growth adorning their thorax, which takes on the most extravagant shapes, sizes, colours and textures (see photos below).

Currently, more than 3 270 species have been described throughout the world, the greatest diversity of which is found in Central and South America. They are divided into families: Aetalionidae (6 genera and 42 species) – Melizoderidae (2 genera and 8 species) – Membracidae (more than 400 genera and 3 000 species). 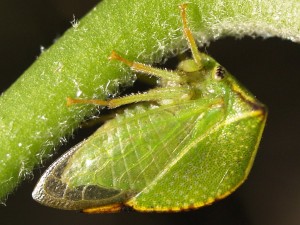 Alike all Hemipterans, membracides have a modified and specialized intestine with a filtration chamber that allows them to filter and assimilate nutrients from the sap. Excess liquid is excreted: miellat, most of the time harvested by social insects such as ants, wasps and bees for its carbohydrate and essential amino acid content.

Membersracids may be dependent on a single host plant species, or on several species depending on their stage of development. caption id=”attachment_1667″ align=”alignright” width=”300″] 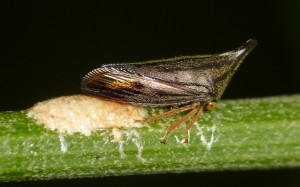 The egg-laying is done either in the tissues of the host plant, the female inserting her eggs using her ovipositor (abdominal appendages in the shape of a “sword” that allow the females to bury their eggs in a substrate, organs that are found in many insect families: Orthoptera, Hymenoptera…), or directly on the surface of the plant. In both cases, the female covers them with a waxy substance to protect them from desiccation, predators, parasitoids, fungal infections and chemical defense mechanisms of the plant (resin, latex…) (see photo 1).

From egg to imago, development goes through five hemi-metazole larval phases: larvae resemble adults and do not go through a complete metamorphosis stage (lire th article).

The mating methods are still poorly known : the female may be fertilized by one or more males depending on the species.

Species in temperate regions tend to be univoltines (one generation per year) and hibernate as eggs, and those in tropical regions multivoltines (several generations per year). However, there is some influence of seasonality of host plants and habitat in the latter.

There is a continuum of the level of sociability in membracides solitaire, grégaire and subsocial.

The laying behaviour also varies greatly between species. It can be single or multiple, on one or more host plants, spread or not over time (from a few days to several weeks). The choice of dispersing eggs in several layers and on several host plants reduces the risks of predation and parasitism. Single-laying species, usually gregarious, lay their eggs on areas of the plant where other females have already laid.

III) Relation of mutualism with ants 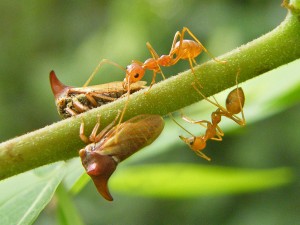 The honeydew secreted by hemiptera and therefore membracides is rich in carbohydrates and essential amino acids, which is an important food source exploited by ants and other social (wasps and bees). The same interactions exist in our countries between aphids and ants (see photo 3 and video at the bottom of the page).

A theme that will be the subject of a next article.

Mutualism certainly encourages the emergence of gregarious behaviour among members because ants are more strongly attracted to groups than to isolated individuals density/dependence/strong>.

In the course of evolution, certain species of ants have developed much more advanced protective behaviours for their resource, honeydew, by building shelters for membersracids (or other hemiptera). The membracids, larvae and/or imagos, of the same species or not, are placed inside, without the possibility of movement. The shape and size of these variable shelters are species-specific. These interactions do not seem to be mandatory because the species of membracides concerned can be found both outside and inside these shelters.

The membracides possess on their thorax an outgrowth of form, color, size and structure extremely variable whose origin and role are still subject to controversy ( see following paragraph). However, this growth, called “helmet”, is hollow and appears to play a role in the production and emission of vibratory signals that insects would use to communicate. These signals are not aerial, but move through the tissues of the plant that serves as a resonance box, detected by the many sensory hairs located on the ventral surface of the membracides. 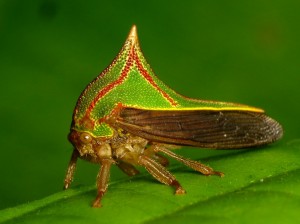 Membersracids appear to be able to determine and locate the sound source, implying the existence of a directional location mechanism that has not yet been described in these insects. The role of the helmet in this system has not been highlighted.

They present, for certain species, patterns and colors particularly visible from other animals, in particular that of their helmets, in order to warn predators of their toxicity: aposematic staining. Many examples exist in insects (example : Heliconius butterflies, read this article) (see photo 4). 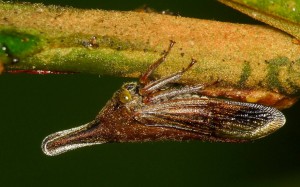 Others, on the contrary, have camouflage outfits and mime the color and texture of the plant support cryptic coloring (see photo 5).

Aposematic staining seems to be more related to gregarious and subsocial species, and critical staining to solitary species.

The type of coloring can change during different stages of development. It is obvious that a strong selection pressure is exerted on these morphological parameters.

To escape, the members have developed a particularly effective escape mechanism: the jump, with a power such that an insect of a few millimeters can reach speeds of 5-5.5m/s in a few milliseconds, which still represents an acceleration of 550-719 G!!

This exceptional performance is possible thanks to a catapult mechanism where enormous chest muscles, under tension, store a large amount of energy in a composite structure (cuticle and rubbery proteins: resilin) and release it in a fraction of a second like an elastic.

These muscles are located at the base of the hind legs, in the coxo-trochanter joint ( see illustration 1). When they are under tension, the femur is pressed against the body of the insect in a ventral notch. When the pressure is released, the femur is propelled backwards which causes the insect to move forward ( see figure 2).

Illustration 2 : Profile view of a Ceresa basalis, captured at 5 000 frames per second. The colour lines corresponding to the different parts of the hind leg (Source: M. Burrows (2013) – The Journal of Experimental Biology – Modified by B. GILLES)[/caption]

The aerodynamic shape of the limbs increases the efficiency of the jump. Most of the time the wings remain closed during this phase and do not seem to intervene. However, it was observed that, depending on the species, the wings could flap at different times during the jump, perhaps to stabilize the trajectory and body position.

Speed and acceleration of the jump are dependent on the size and weight of the insect that leaves the ground on average in 2 milliseconds!

This mechanism allows the animal to generate forces per unit mass much higher than muscles can produce: they are incredible since they can reach 5 300 to 33 000kw/kg. Considering that the jumping muscles represent 11% of the total body mass, these values are well beyond the physiological possibilities of muscle contraction. Muscles can only develop contraction powers around 250-3 000kw/kg.

The evolution therefore favoured the selection of this propulsion system by catapult to increase the performance of the jump and thus the chances of survival of the insect. This innovation has appeared several times in insect lines such as fleas and locusts.

VI) Origine of the protothoracic appendix (the helmet) : a still topical debate

The origin of the helmet among members is still a controversial issue today.

Illustration 3 : Representation of the different elements of the body in the insect. A) Interpretation of Benjamin Prud’homme’s team ; B) Interpretation of Istvan Miko’s team (Source : Miko et al. (2012) – PlosOne – Modified by B. GILLES)[/caption]

For the French team, the appearance of a third pair of wings on the protothorax would constitute an unprecedented innovation in the evolutionary history of insects. Indeed, evolution essentially leads to reductions or losses of organs and appendages. The morphological structure of insects as we know it today has remained unchanged for nearly 350 million years: a pair of wings on the second and third thoracic segment, T2 and T3 (lire th article on insect phylogeny).

Their conclusion is based on genetic and morphological studies. Afraid, the helmet would be a structure independent of the thorax, connected by flexible joints composed of many more or less sclerified elements, such as those found at the base of the wing pteralia (lire th article). It would thus come from the fusion of this pair of thoracic appendages to form a single structure (presence of a median line in the anteroposterior axis). These appendages and subsequently the helmet, not being subject to the functional constraints imposed by flight, would have evolved in an infinite diversity of shape, colour, size and texture.

In addition, the study of the structure of the helmet reveals the presence of a complex network of veins, two layers of epithelial cells connected together by cuticular columns : structures found in the wings of insects (lire cet article).

Genetic analyses have shown the expression of genes involved in wing development such as the Nubbin gene and in the positioning of the proximal-distal axis of the appendages : Distal-Less (DLL) and Homothorax (HTH). The presence of these molecular signatures in the helmet cells would indicate its wing origin.

A conclusion denied by Istvan Miko’s international team for which the helmet would be a simple outgrowth, an hypertrophy of the protothorax (T1). The elements of the joint presented as modified pteralia would be outgrowths of the cuticle where the muscles controlling the closure of the thoracic spiral are fixed prepectus (opening giving onto the trachea and allowing air to enter the insect’s body). Also, the complex system of veins and tracheas found in the helmet is not homologous to that of the wings, even if its purpose is the transport of nutrients and oxygen.

In addition, the middle line of the helmet would be an ecdysiale line (suture of the cuticle allowing the insect to leave it and thus to moult) and not a fusion line between two wings. Istvan Miko suggests that there are no structural differences with the other thoracic segments : T2 and T3.

In this case, the helmet would be a simple non-articulated evagination having a developmental origin close to that of the wings where would be involved the same genetic processes.

Further studies will be needed to discover the mystery behind this most surprising organ. Case to follow!!