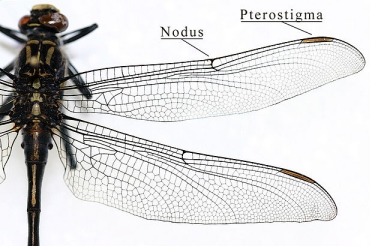 Insects are the only invertebrates that have acquired the ability to fly (place insects in the classification, read th article). Unlike other flying animals such as birds and bats, where the wings come from the forelegs, those of insects have a completely different structure and origin. Their origin and evolutionary history are still confused and controversial. From a simple system at the beginning, the operation of the wings later proved to be incredibly complex!

The first known fossil winged insects are dated to the Paleozoic (primary era : 545-245 million years) and are all terrestrial. The acquisition of wings and flight has allowed an explosion of diversity of families (Hymenoptera, Lepidoptera, Diptera…), genera and species (read th article). The evolutionary advantage provided was gigantic: better dispersion (search for food, favourable environments, etc.), ability to flee predators, better reproductive strategy. This advantage was such that today, winged insects or”Ptérygotes” constitute almost all insect species. Non-winged insects known as”Aptérygotes” represent only a small minority of species.

Two theories have been proposed to explain the origin of insect wings.

In recent decades, Czech paleo-entomologist Jarmila Kukalova-Peck has presented a new theory. According to her, in arthropods such as crustaceans, the legs are branched (“biramed”), with a dorsal or external appendage (exopodite) and a ventral or internal appendage (endopodite), an anatomy that is not found in insects where the legs only consist of an appendage ( see illustration). The idea is that the wings would come from modified exopodites (2nd and 3rd pairs), while the first pair would have been lost or incorporated into the thorax.

This theory has the advantage of explaining, unlike the other two, the implementation of a<!more–> complex musculature even before the appearance of the functional wing, but also the presence on the surface of the wings of mechanosensory structures (sensilles campaniformes and organes chordotonaux) similar to those found on the legs (articles on the mechanoreceptors : campaniform senses and chordotonal organs). These sensory organs play a role in the control of reflexes and movements, essential parameters for flight (lire this article).

The origin and evolution of the wings in insects are not yet well described, they are modified and completed with palaeontological discoveries and analyses on the development of arthropods.

Two questions remain: “What morphological innovations were necessary?” What were the selection forces that allowed these aerodynamic structures to evolve?”

The chest is composed of 3 segments (Pro-, Meso– and Metathorax) (read th article). The wings of “modern” insects are inserted on the 2nd and 3rd thoracic segments (called Pterothorax). The two pairs of wings are articulated with the scleritis (sclerotic exoskeleton plate) dorsal (tergite) and lateral (pleuritis) thorax via a series of small sclerified elements called Pteralia (or axillary structure). The organization and number of Pteralia vary greatly between species, but a general plan can be defined. It consists of 3 axillary sclerites (1ax, 2ax and 3ax), a distal medial plate (dmp), a humeral plate (hp) and a proximal medial plate (pmp) ( see illustration below).

The wing is a cuticular membrane (exoskeleton) formed by the juxtaposition of two epidermal layers (a dorsal and a ventral). The muscles, at the origin of the movements, are located at the base of the wing and connected to the thorax by structures of the exoskeleton: the Pteralia ( see previous paragraph). The functioning is thus totally different from the wings of mammals and birds where the musculature is inside the limb.

These veins (also called veins), tubular, are pathways of the hemolymph (physiological fluid : “blood” of insects), tracheal (air and oxygen transport) and nervous (neurons of sensory organs : role in the detection of cuticle distortions) (illustration opposite).

The veins travel longitudinally along the wing surface, subdividing and connecting with each other to form cells either closed (fully veined) or open (partially veined). The layout and design of these cells are specific to each evolutionary lineage: the classification of families and genera thus relies heavily on the use of these morphological characters. Their study also provides a lot of information on the evolutionary history of wing formation and flight adaptation from a biomechanical and aerodynamic point of view, especially since the wing structures have a higher fossilization power than the other elements of the insect.

Entomologists, in classifying “modern” insects, have developed several systems (Comstock & Needham, 1898, 1899; Kukalova-Peck, 1991). The system adopted by the largest number is that of the English entomologist Robin J. Wootton (1979). The principle is based on the nomination of the main ribs and the numbering of their subdivisions (see illustration below).

The ribs also play other functions: flexibility and mechanics. The variability of the diameter, thickness and section shape of the veins give the wing specific mechanical and bending properties. During flight, the wing undergoes stresses and deformations related to the pressure exerted by the air on its surface. To counter these and maintain its efficiency at the wing, certain ribs, by their degree of flexibility or rigidity, play a reinforcing role. For example, the Costal rib allows the wing to remain rigid during hover flight and a highly rigid cell at its tip, the Pterostigma, prevents the wing from floating during sudden changes of direction by adding weight. Also, in Diptera and Hymenotpera for example, the wing tips are particularly flexible – an adaptation to avoid degradation during impact or landing. Some orders have independently developed the ability to bend their wings on their abdomen (Neoptera), a selected adaptation in protection as in Coleoptera : the forewings have become rigid (Elytres) and the hindwings fold transversely to fit under the forewings), or to facilitate ground movement. A faculty that is allowed by the presence of bending lines where the structure of the veins gives them a great flexibility.

In other orders, such as Odonata (dragonflies) and Ephemeroptera (ephemera), the wings remain open on either side of the body when the animal is at rest. This character being ancestral compared to the “foldable” wings, they are considered as “primitive” (or Paléoptères). In Odonates, the wing base is simplified, the medial plates have disappeared and the sclerites have fused to form only a humeral plate and an axillary plate ( see illustration below).

Structure of the articulation of a Palaeopteran and Neopteran wing (Source : Evolution of the Insects, D. GRIMALDI & M.S. ENGEL, Cambridge University Press-2005) – Modified by B. GILLES[/caption]

Over the course of evolution, the wings have changed significantly. There is as much shape, ornamentation, texture and relief as there are insect species. The changes sometimes gave the wings roles other than vol.

A second article follows this one which concerns the musculature, aerodynamics and control system in insect flight. For more information, I invite you to follow this link.

Recommendation of works on this theme