Insects and plants have maintained interdependent relationships since the appearance of flowering plants in the Cretaceous (145-65 million years) (read th article). This co-evolution between flowering plants and insects is at the origin of the diversity of interspecific interactions, species and biological cycles.

Among these relationships, some are favorable to both protagonists (the plant and the insect) mutualism. The insect develops, feeds, performs its reproductive cycle in whole or in part via the plant organism, and in return, the plant is pollinated and fertilized. The insect then acts as a transporter of pollen grains from one flower to another, thus helping to maintain the genetic diversity of the plant species.

Sometimes, two species may have evolved so that they cannot live without each other: they become totally dependent. One of the most remarkable examples of mutualism is probably that of wasps of the family Agaonidae (Chalkidiens-Hymenoptera) and fig trees. It is this amazing association that you will discover in these lines. 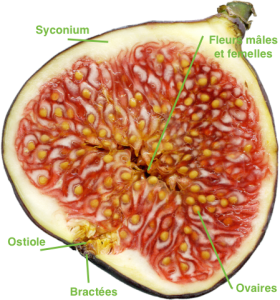 Contrary to what one may believe, fig is not a fruit! It is in fact a floral receptacle closed on itself, enclosing the female flowers and the male flowers. The fig thus forms an urn (Syconium), whose opening at the top (ostiole) is closed by bracts (sorts of leaves at the base of the flower stalk). About half of the species are called monoïques (a fig bears male and female flowers), the others being dioïques (male and female flowers are carried by different trees).

In the world, more than 800 species of fig trees, grouped into 20 genera, are listed, the vast majority of which are found in tropical forests: the genus Ficus groups the largest number of species.

The fig, chemically unsuitable for a large number of phytophagous (animals feed on plant material) until it matures, also offers a protective indoor environment for any insect with the possibility of settling there. Thus, during evolution, many insect species (Diptera, Coleoptera, Hymenoptera) have managed to take advantage of it through innovations and morphological adaptations. But Agaonides wasps go further: not only exploiting the plant, they have established a relationship of total mutualism, interdependence, and play the role of pollinators of the fig tree. The pollination of each fig tree species depends on one or more wasp species Agaonides (an average of 4 species).

Agaonid wasps are insects of barely 1 to 2mm, phytophagous pollinators. Their morphology allows them to penetrate the fig through the ostiole to reproduce, lay eggs and thus allow a protected development of their larvae. Females of some species have detachable wings, a flattened head, hook-shaped antennae, a smooth integument and strong claws at the tip of the tarsus. Males are totally different (sexual dimorphism): they are apterous and devoid of eyes. Agaonid females, which play a role in pollen transport (active or passive pollinators), have specialized organs and invaginations of the abdomen or mesothoracic (middle chest segment).

This inter-relationship with fig trees, which dates back 87 million years, has led to a co-evolution in which mutualism has become so highly specialised that each species of Agaonide depends on only one or even two species of fig tree. To date, only 356 species of Agaonides have been described. There are more than 1,000 potential species of which 600 remain to be discovered. They are currently classified into 3 subfamilies: Agaoninae, Kradibiinae and Sycophaginae, but far from being fixed, the classification of these wasps regularly evolves with the acquisition of new taxonomic and genetic data.

The knowledge of the mutual relations between all these species is still limited. The small size of wasps, species diversity, global distribution and observation in tropical areas are all obstacles and difficulties in conducting studies. With the appearance of molecular and genetic tools, the study of DNA nevertheless makes it possible to begin to better understand the evolutionary history (Phylogeny, read this article) of this association as well as the genetic and ecological mechanisms at the origin of this adaptive process.

The biology of wasps and their mutual relationship with fig trees :

The story begins with the emergence of an Agaonide female that emerges from the fig with the sole objective of finding a fig of the right species, at the right stage of maturation, to lay eggs. She has only a few hours, at best two or three days, to reach her goal. It sometimes has to travel long distances (several kilometres) through the maze of tropical forests, resulting in a high mortality rate. Once the adapted Syconium is discovered by chemotactism, the female enters the inside of the fig through her ostiola, the access to which is closed by bracts, using her mandibles, her flattened head and her anterior tibias. Some species can then separate from their wings for better penetration. Natural selection has favoured this system, during evolution, to allow only one specific species to penetrate and pollinate these flowers.

Once in the fig cavity, the female Agaonide can lay in the ovaries of the flowers using her ovipositor (long, thin, tube-shaped organ present at the tip of the abdomen : see photo above). Before and during this phase, it deposits on the female flowers the pollen grains that it has since its fig of emergence transported on “combs” of its legs, to fertilize the flowers. Pollination can be either passive or active (“ethodynamic”) depending on the species (active pollination consists of a particular pollen discharge behaviour on the pistils of female flowers). The production of flowers and pollen has an energy cost for the fig tree. Fig species, which benefit from active pollination by wasps, have responded to this adaptive advantage by producing less pollen and anthers (pollen bags).

It could be demonstrated that the female actively participates in the fertilization of the fig tree flowers because by fertilizing the ovary, this one, by developing, brings the necessary nutritive quantity to the growth of the larva. At first glance, this “altruistic” behaviour is ultimately “selfish” to the advantage of the wasp.

Larvae develop in a plant structure called galle for 3 to 4 weeks. Adult males emerge before the females with whom they mate even before they emerge and then die quickly. A male can thus fertilize several females. The females, once out of their gall and fertilized, leave the fig to start a new reproductive cycle ( see illustration opposite).

Fig tree adaptation to the presence of wasps Agaonides

The fig tree, by the presence of wasps, even if it benefits by pollination, can not afford to lose all of these ovaries. Natural selection has therefore developed a stratagem…

As described above, female wasps lay eggs in the ovaries using an ovipositor of a certain size. The fig tree has positioned these ovaries at different heights so that some of them remain out of reach of the wasp. Thus, the fig tree offers some of its ovaries to its pollinators while guaranteeing itself a future (seed formation) ( see diagram opposite).

The life cycle presented above is adapted to monoic species (each fig contains male and female flowers). However, among fig trees, 50% of the species are dioecious, i.e. some figs contain female and male flowers, and others only female flowers. That’s how things get even more complicated!!

In figs having both types of flowers, the ovaries are positioned so as to remain accessible to female Agaonids. The ovaries are therefore not intended for the formation of seeds: this is why figs are called “male”. In figs, which consist only of female flowers, the ovaries are inaccessible to female wasps and destined to become seeds (“female figs”). The male and female figs are chemically identical in shape and colour, so that an Agaonide female can penetrate either type of fig. If it reaches a male flower, the advantage is to the wasp which can generate a progeny which in its turn will be able to pollinate and fertilize ovaries of another female fig. But if it penetrates a female flower, then the advantage is to the fig tree where its ovaries will be fertilized by the wasp and which will give seeds ( see diagram opposite).

These biological cycles are incredibly complex. The diversity of these mutual relations is linked to the number of species, the seasonality of fig ripening, the synchronisation of phenology (rhythm of occurrence of biological events), the duration of the cycle, etc.

This plant/insect interaction represents a powerful model for the study of ecological and evolutionary mechanisms related to species speciation, adaptation biology, behavioural ecology and communities. Current molecular and genetic analysis tools should unravel the evolutionary history and phylogeny of these species.

Understanding all these parameters brings a new look at how ecosystems and living things interact. It is essential to understand the importance of the role played by each species, whatever its scale. We have proof of this here, where a tiny wasp allows the renewal of part of the forest’s trees with all the consequences on the trophic networks (food chain) that result. Fig trees are a source of food for a range of fruit-eating animals such as bats, primates, birds… which themselves interact with other species: through Agaonid wasps, they constitute species called” keystone” because their presence is essential to the balance of tropical environments.

For more information, I recommend a very good site http://www.figweb.org/Figs_and_fig_wasps/

Recommendation of works on this theme :