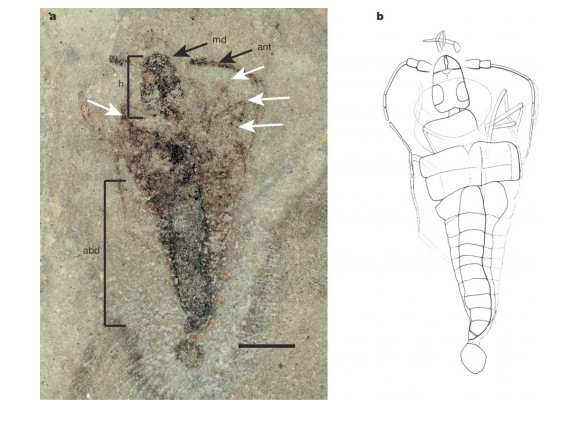 A new international team of researchers has just established a new phylogeny* of insects that can trace the evolutionary history of different families using molecular and genetic tools, and comparative analyses between thousands of genes and sequences nucleotidiques* (* definition at the end of page). 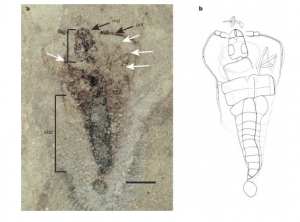 Photo and illustration of the oldest insect fossil (Strudiella devonica)[/caption]

The oldest known insect fossil is 412 million years old (early Devonian geological era), indicating that insects originated long before, during the Ordovician (485-440 million years), see during the Cambrian (540-485 million years). The lack of fossils during these two periods prevents to conceive the history of their appearance in a certain way.

Insects are the first organisms to have adapted to terrestrial life and fresh water, they have since diversified into many families such as butterflies (Lepidoptera), flies (Diptera), dragonflies (Odonata), Beetles, termites (Isoptera), locusts (Orthoptera), and many others. Insects have evolved and adapted over these millions of years to a range of environments and climatic changes, and have also developed flight and social life.

For those who ask the question: “What is an insect?”Follow this link.

This is why it is very interesting to determine the

successions of evolutionary events that are at the origin of the appearance of this diversity. The aim is to characterize the order and rhythm of morphological and physiological innovations at the origin of insect diversification. For example, the relationships that exist between hemi-metabolic insects (Orthoptera, Isoptera…) and holometabolic insects (Diptera, Coleoptera, Lepidoptera…) are still unknown (for more information, read th article).

This team of scientists, instead of using information from fossils, studied the genome : genes and genome sequences of insects living today, selected to represent all families and taxons* (* definition at the end of the page). Thus, 1,478 genes belonging to 103 species, or 2.5 gigabases of DNA, were analysed. Analysis consists of assembling the same genes and DNA sequences from different family species and comparing them to evaluate the number of differences within the sequences. The more the sequences differ, the further the divergence between the two families is. This technique is based on 2 principles: the mutation rates ( DNA replication error during cell division) and the molecular clock (time scale at which mutations appear). It remains complex to explain in a few lines, excuse me for passing quickly on this part…

The results of this study, published in Science, suggest that the first hexapods, the common ancestors of all insects, appeared in Devonian around 479 million years, and the beginning of their diversification around 441 million years. The radiation of the first insects (Ectognaths) seems to be linked to that of the plants which colonize the terrestrial environment at this time ( see illustration below).

This study reveals a first period of high insect diversification that is linked to the acquisition of flight. The first flying insect fossils discovered in the Mississippi region date back to the Carboniferous (324 million years), the description of an insect with “wing-like” organs (Rhyniognatha) indicates that the wings appeared during the Devonian (415-360 million years), see Silurian (440-415 million years) (read this article).

Finally, the study shows that the first holometaboles (insects with complete metamorphosis) would have appeared quite early in evolution, from the beginning of the Carboniferous, around 350 million years ago. The appearance of flowering plants in the Cretaceous (145-65 million years) has allowed and favoured a second very strong diversification of these insects such as butterflies, flies and wasps (Hymenoptera) ( see illustration below).

This new phylogeny, evolutionary history, of insects provides a better understanding of the successive morphological and physiological evolutionary processes that led insects to such a diversity of form, biology and ecology.

On January 18, 2016, the results of the study conducted by the French Fabien Condamine offer a new look at the evolutionary history of insects and the origin of their diversification. Insect diversification is linked to three major events: mass extinction – environmental changes, particularly following the Cretaceous crisis – innovations such as vol and complete metamorphosis. You can find the article by following this link.