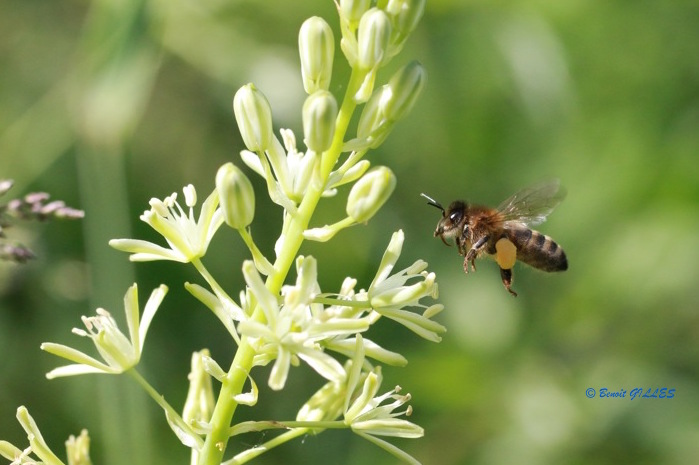 With their presence on Earth for more than 400 million years, their diversity, their adaptability and their abundance, insects are an unprecedented biological success and an essential component to life on our planet. Today, one organism living on two and three out of four animals belong to their order.

The ecological functions that these arthropods fill within ecosystems are innumerable. It is possible to cite, among other things, pollination, consumption of vegetation cover (herbivory), recycling of decomposing organic materials (coprophagy, scavenging, etc.) and nutrients, control of other species considered As “harmful” and comprising the diet of many species of birds, amphibians and mammals. Maintaining them in food chains is paramount to ecological equilibrium.

However, a phenomenon of a sharp decrease in insect populations in Europe and around the world has been proven for several decades. Hallmann et al. (2017) and Lister & Garcia (2018) thus demonstrated that in some regions of Germany and Puerto Rico National Park, although geographically and ecologically remote, almost 80% of the population had disappeared in the last 30 Years. However, this globalized disappearance arouses little interest and a small consideration of our societies in relation to the height of the services that insects make to mankind. Scientists, naturalists and environmentalists are rightly concerned about this phenomenon.

Our societies focus on food security, human health and economic development forgetting that these problems are intimately linked and dependent on ecosystem services rendered and offered by nature and by insects.

The food supply of all mankind comes from plant and animal materials whose tracking and multiplication can only be maintained in a functional environment.

Although it is difficult to accurately estimate the ecological and economic value of pollination, pollinating insects fertilizing nearly 75% of the plants we consume (crop fertilization) and 90% of wild plants, this service has Estimated to be between 160 and 689 billion annually. With 20 000 species, bees (solitary or social) make up the vast majority of pollinating insects. The decrease in honey bees (Apis mellifera) across the planet represents only a small part of the phenomenon. Indeed, the balance of ecosystems is based mainly on a wide variety of solitary species whose disappearance constitutes an even greater threat to the environment.

Pollination of crops by insects is estimated to be more than 153 billion euros each year.

The survival of a multitude of plant species is totally linked to the presence of one or a few species of particular bees. After millions of years of co-evolution, insects and plants cannot live one without the presence of the other. Thus, the disappearance of solitary bees, although discreet and without “interest” for man, leads to the disappearance of a part of the fauna, causing a loss of diversity and imbalances in the ecosystems.

This phenomenon is called “trophic Cascade“. The principle rests on the fact that the disappearance of a link in the chain can upset the entire trophic system by causing a succession of secondary extinctions. It is therefore necessary to know the interactions between the different communities of living beings that comprise an ecosystem to estimate the danger posed by the disappearance of a link.

A study in the National Park of Puerto Rico (Lister & Garcia in 2018) demonstrated the causal link between the decline in the number and diversity of insects with that of birds and amphibians. Similar studies have brought the same results in urban areas where insect-eaters have mostly disappeared.

Other insects are involved in pollination: flies (Diptera), Butterflies (Lepidoptera), Wasps and ants (Hymenoptera) or beetles, where each species plays a specific and precise role in the equilibrium of the chain of an ecosystem.

The disappearance of a large number of species and insect populations will have a profound and lasting impact on the economy of agriculture and food security.

Many insects play a role in regulating populations of other insects, some of which are considered “harmful” to crops. To combat harmful species, predatory species, parasit parasitoids for the most part, were voluntarily introduced.

For example, the introduction of the Epidinocarsis Lopezi wasp in Africa in the years 1970-1980 saved cultures from the proliferation of the Moth Chilo Paratellus (Crambidae) and the scale insects Phenacoccus Manihoti (Hemiptera: Pseudococcidae). The introduction of this wasp benefited nearly 200 million farmers for an economic benefit of between 8 and 37 billion million.

The increase in trade across the planet leads to the introduction outside their range of animal and plant species, some of which settle and become invasive. Costs associated with these invasive species are estimated at 1.4 TCM (1 400 000 000 000 dollars) each year.

In Africa, the regulation of the water hyacinth (Eichhornia crassipes – Pontedericeae) has been carried out since 1991 using two species of Weevil from South America (Neochetina Eichhornia and N. Bruchi-Curcculionidae) and a butterfly species (Sameodes Albiguttalis-Pyralidae).

The most undervalued ecological role is that associated with the development and maintenance of soil structure and fertility. By degrading, animal and plant organic matter (biomass) releases nutrients used by plants to grow, but also prevents organic waste accumulation, reduces nitrogen losses and erosion, and improves the retention of Carbon and water storage. These services are estimated at 380 million annually for the only coprophagous beetles in the United States.

When Europeans settled on the Australian continent nearly 200 years ago, they took a procession of cattle like cattle and sheep. Today, the cattle herd has more than 30 million head. Since the native coprophagous beetles are not suitable for degrading and eliminating the excrement of these animals, billions of flies have multiplied in the hundreds of millions of dung deposited daily.

In the years 1960-1970, first introductions (Dung Beetle Project) of African and European coprophagous species have taken place to alleviate this ecological deficiency resulting in the annual loss of one million hectares of pasture whose Meadows were covered with dung. The introduction of these insects has made it possible to dry and bury the dungs greatly diminishing the availability of resources for flies and allowed to recycle the organic matter. Rapidly the balances of the Australian prairies have recovered to the point where the productivity of some grasslands has rapidly increased by more than 30%.

In 2017, this Franco-Australian project continued between the Université Paul-Valéry Montpellier III and the Australian CSIRO with the aim of introducing 18 new European coprophagous species. The first trials began in 2017, scientists are planning to release tens of thousands of these beetles into the environment in southern Australia and hope to improve the situation over the next decade.

Cause of insect decline

The disappearance and widespread decline of insect populations are multifactorial: anthropogenic actions, climate change, global habitat destruction. In addition to these pressures, the development of intensive agriculture using countless insecticide molecules, pesticides, herbicides, the suppression of crop rotation, among others, has accentuated the process.

The introduction in the middle of the years 1990 of neonicotinoids in the USA and in Europe had particularly bad effects. The molecules that cover the seeds to protect it during sowing are found to be 80% diluted in soil and water. The “systemic Pesticides Intervention Force” (TFSP) Working Group, made up of international scientists and established in 2009, has made it clear that neonicotinoids are affected by both ecosystem services and Human health.

Insect populations do not decline mainly with the local intensification of agricultural practices, but also because of their permanent extension. The expansion of monoculture areas eliminates all biodiversity, destroys natural habitats and fragments landscapes, and it is necessary to add road systems, urban expansion, and light pollution from lighting Impacting nocturnal animals such as butterflies or bats.

Habitat fragmentation increases the risk of extinction of species with low dispersal power by decreasing the potential for renewal and lowering genetic diversity (gene flow between populations) that induces a weakening of Survival and reproductive success of individuals.

Climate change accentuates this fragmentation effect by reducing the possibility of insect populations changing their range. The current situation is completely different from the Pleistocene where insects could easily follow the moving line of climatic front between cooler periods.

Conservation of insects: a priority

The food supply of human populations depends on ecosystem services rendered by insect activity. parasitoids and flies are involved in regulating populations of other insects that are potentially harmful to crops. The absence of these insects, in particular, generates a strong dependence of the agricultural world on agrochemicals with significant environmental and financial consequences.

Take an example: The Wasp Cotesia flavipes, introduced in south and East Africa, has enabled, by controlling the proliferation of the butterfly Chilo paratellus in maize crops in 1990, to maintain the activity of more than 13 000 farmers in the region. Financial benefits were estimated in 20 years at 183 million million in Kenya and 39 million in Zambia, while reducing the use of insecticides.

The conservation of insects cannot be done with the same principles as for vertebrates.

The advantage of insects is their high resilience due to their abundance and multiplication capacity. Although species have protection status and are listed on a red list, they are not subject to effective protection measures in nature. For example, the Pique-prune (Osmoderma eremita – Scarabaeidae), which has almost disappeared, is totally dependent on the presence in the environment of hollow trees which are not subject to protective measures.

It is also necessary to take into account the trafficking of insects for collection purposes.

An estimate suggests that the total value of only four economic services rendered by insects would be in the order of several million billion dollars each year!

Garibaldi (2016) showed that planting flowers and hedges in a growing area, coupled with targeted pesticide use and restoring natural and semi-natural peripheral areas, significantly improved the yield of Cultures. It is a question of designing synergies between agriculture and biodiversity.

Other studies have shown that two-hectare agricultural areas spread across the planet (Africa, Asia and Latin America) enriched in flowers saw their yield increase by 24%. This shows that promoting natural habitats not only benefits ecosystems but also food production and small farms in the southern regions.

For the past 20 years, beekeeping has sought to hybridize populations and subspecies of honey bees in order to increase productivity to the detriment of more adapted and genetically diverse original populations. Thus, the subspecies Apis mellifera mellifera (Black Bee) adapted to live from the Western Mediterranean to Scandinavia, the region that the species colonized more than a million years ago and which survived two cooler periods, has gradually been Abandoned by beekeepers.

Today the global decline of the bee has multiple causes. The disappearance of bee colonies rose from 5-10% per year in the years 1990 to 25-30% today. This decline has helped in parallel the trade of colonies throughout the planet and the spread of pathogenic organisms and parasitic bees. Hybridization between these imported and indigenous strains causes an erosion of the genetic diversity of populations to the detriment of geographic and climatic adaptations now a natural diversity. The survival of the black bee in nature is now compromised.

Ecological networks consist of establishing interconnected corridors to connect isolated habitats to each other in order to overcome the fragmentation of natural areas. This concept has been successfully applied in agroforestry in South Africa for example. It is an effective and recognized conservation tool to increase the resilience of natural ecosystems in the context of climate change. The 200-metre-wide corridors are particularly suitable for small organisms such as insects and are sufficient to improve biodiversity and ecosystems.

Although some species considered to be in danger are listed on the IUCN Red List, few are actually the subject of protection measures. Insect conservation measures must be different from those put in place for plants and vertebrates. Insects, with a strong ability to propagate and occupying reduced ecological niches, do not integrate into global conservation policies.

In addition, actions at the local level such as trade in species for animal and human consumption can lead to the conservation of habitats and ecosystems in which certain species live. For example, in Cameroon, the Palm weevil (Rhynchophorus Phoenicis) is currently the subject of a breeding and collection programme in Cameroon aimed at dealing with problems of malnutrition and poverty (link).

Proposals for works on this topic