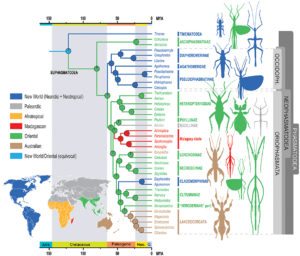 The Order of Phasmatodea (phasms and phyllies), composed of more than 3,100 species and 500 genegenes, is one of the oldest groups of insects. They are popular for their ability to camouflage themselves in vegetation. Their morphology, sometimes displaying extravagant shapes, makes them look like twigs, leaves or bark in order to make them invisible to predators. This mimicry can be homochromic (color) or homomorphic (shape), or both at the same time.

Almost all species of phasms, phytophage and nocturnal, are found mainly in tropical and sub-tropical regions.

The systematics of the Phasmatodea based until today mainly on morphological and geographical criteria, the classification of taxa is not representative of their phylogenetic history (relationship between beings and biogeographic.  Although phylogenetic studies have been conducted in recent years, the often limited data have failed to provide reliable conclusions about their evolution, which remains a mystery.

An international team, led by German entomologist Sven Bradler (Department of Animal Evolution and Biodiversity, University of Gottingen, Germany) has set out to unravel this mystery by conducting a study based on 27 new transcriptomes (RNA from genome transcription) from a representative sampling of group diversity across the planet (excluding Africa).

Using molecular and genetic tools, scientists were able to estimate the time of divergence between different species (phylogeny) and thus reconstruct the biogeographical history of the group (phylobiogeography).

The results of their study were published in October 2019.

The first elements of the study confirm the place of the Phasmatodea compared to other large groups established by previous molecular analyses. The appearance of the Phasmatodea occurs after that of the Dermaptères (earwigs), plecopters (pearls), Dictyopters (termites and mantises) and Embioptera (Figure 1 below).

The originality of the published results lies in particular in highlighting links between geography and genetic proximity (related species) previously unsuspected. Genetic analyzes group the species into two main geographic areas: those belonging to the Old World and those belonging to the New World. The authors propose to name these two new clades (groups): Oriophasmata (“Phasmids of the Orient”, Old World) and Occidophasmata (“Western Phasmids”, New World) (Figure 1 above and Figure 2 below ).

Surprisingly, no taxonomic or morphological scheme had hitherto suggested this distribution.

The Occidophasmata clade is subdivided into two dominant clades also associated with geography: the Diapheromerinae occurring in North America and the Pseudophasmatinae (= Pseudophasmatidae for some authors) meeting in turn in South America (Figure 2). The characterization of these groups is essentially based on the presence or absence of a triangular field at the top of the tibia.

Within the Pseudophasmatinae group, the phylogenetic position of the genus Agathemera (South America) (photo 1 opposite), consisting of eight species characterized by the absence of wings and a corpulent shape, has long remained an enigma.

Based on morphological criteria, the genus was placed successively and several times within the sister groups of the Euphasmatodea or pseudophasmatinae. The results obtained in 2019 partially corroborate the attachment of this kind to the Group of Pseudophasmatinae.

Among the Oriophasmata, the changes made by the study mainly concern the placement of the Phylliinae subfamily (true “leaf” phasms: Phyllium philippinicum – photo 2 below) within the Euphasmatodea. Previous molecular studies have suggested a recent divergence of these lines. Again, biogeographic data support this phylogeny. Although Phylliinae currently have a predominantly Asian range, fossils aged -47 million years are evidence of the European origin of these insects.

On the African side, a monophyletic clade (a groupofing of species with a common vs. polyphyletic ancestor) specific to Madagascar has also been identified. It consists of the families of Anisacanthidae (Paranisacantha) and Phasmatidae (Spatomorpha), the tribe of Achriopterini (Achrioptera) and the subfamily of the Antongiliinae (Antongilia).

For its part, the Lonchodidae clade (Oriophasmata), comprising the subfamilies Lonchodinae and Necrosciinae, has recently diversified strongly (evolutionary radiation) into more than 1,000 species, representing nearly 30% of the Phasmatodea described.

The results of the study provide new estimates of the periods of diversification of Phasmatodea (Figure 3 below).

The first radiation event, which concerns the splitting of the Euphasmatodea clade with that of Timematodea (currently represented by the genus Timema) (Figure 1), whose first estimates were based on the discovery in China of fossils dated to the Mesozoic between -103 and -95Ma, would find an older origin around -121Ma (Cretaceous).

A second radiation event took place between the “stick” and “leaf” species. Previously estimated at -61Ma, the split would have taken place around -80Ma.

In the Oriophasmata, radiation events would have occurred at the same time (-59.5Ma), when the heteropterygidae living on the ground would have diverged from the rest of the clade. The diversification of Heteropterygidae began at the beginning of the Paleogene around -46.4Ma.

The split between the clades of Phyllinae and Bacillinae would have begun before Madagascar’s separation from the African continent, around -56.6Ma. A radiation event from the Malagasy clade is said to have started more recently between -38.2 and -52.1 Ma.

The presence today of “stick” phasms on the island supports the hypothesis of colonization by these insects after its separation from Africa (-38 and -51Ma).

The results of this study also allow us to estimate other major radiation events in TheOriophasmata, between The Lonchodinae, Necrosciinae (-47.3Ma) and Clituminae (-37.3Ma) for example.

In the Indo-Australian region, the clade of the neotropical Cladomorphinae would have diverged from those of present-day Australia before the separation of The Australian and South American Antarctica, between -42.6Ma and -54.6Ma.

In summary, this study, based on the molecular clock technique, corroborates a recent diversification of Phasmatodea that took place mainly during the Cretaceous (around -66Ma).

The cause of this recent event and the success of the Euphasmatodea is not yet well understood. One explanation lies in a phenomenon of co-evolution between these insects and angiosperms. Similar ecological associations such as prey/predator relations and mimicry have, however, been found in fossils of Cretaceous-dated “stick” phasm species living in Gymnosperms forests.

Another explanation is the development of major innovations such as the horizontal transfer of intestinal bacterium pectinases genes into the genomes of certain species, improving their ability to degrade Angiosperms, or development of hard-boiled seed-shaped eggs. It is also possible that the diversification of these insects is the result of a combination of multiple factors.

The study confirms the eastern origin of the Phasmatodea: the recent discovery in Burma of fossils of individuals dating from the Cretaceous and close to the Clade of Timematodea supports this hypothesis (Figure 4). However, although the ancestral region of Aschiphasmatinae and Neophasmatodea is considered eastern, further analyses must be undertaken in order to validate this hypothesis.

Given recent diversification, rebuilding the phylogenetic tree and the biogeography of phasms seems rather simple. The different radiation events can be explained by geography and dispersal events.

Examples include the colonization of Madagascar by “stick” phasms after its separation from the African continent and that of southern Europe by a line of “leaf” phasms (Phylliinae) (Figure 2 above).

Even more surprising, the Cladomorphinae clade of Central and South America is believed to be native to Southeast Asia. Colonization of the American container would result from transoceanic dispersal, probably trans-Pacific, or via Antarctica when it was still connected to Australia and South America. Cases of dispersal over such distances to the east and across the Pacific have already been reported in arthropods such as coastal spiders Amaurobioides (Araneae) and metal-resistant pyrals (Lepidoptera – Choreutidae), for example.

Transoceanic dispersal has played an important role on several occasions in the evolution of the Phasmatodea, particularly in the Indian Ocean with Australia and the Mascaraignes Archipelago (Ornebius link) (Figure 4 below).