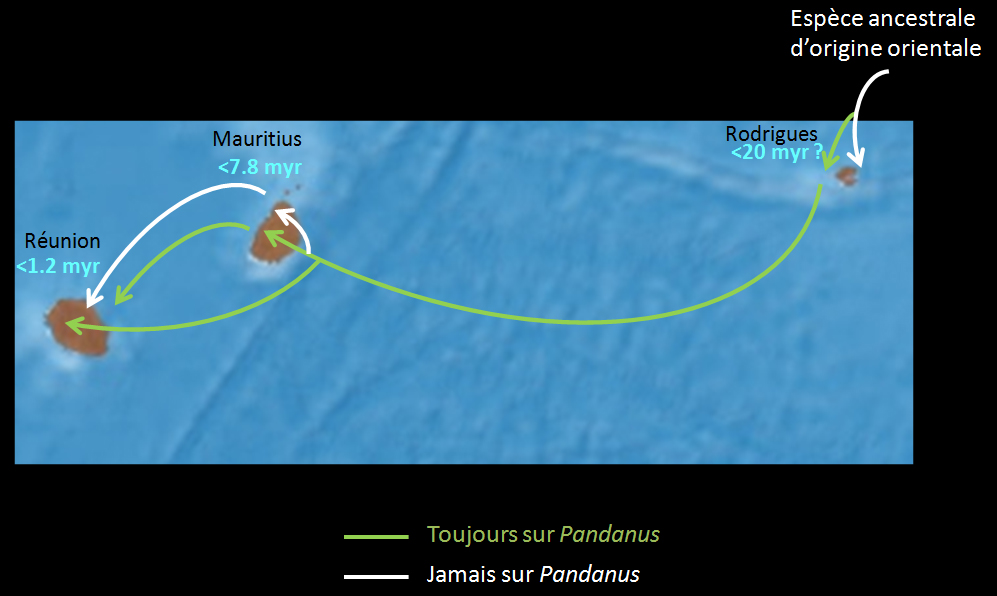 The Mogoplistidae are a basal family of crickets, most of whose limbs are covered with flat, scaly bristles. None of them are capable of flying.

A genus of Mogoplistidae is particularly diverse: the genus Ornebius which includes more than 100 species, mainly distributed in the Indo-Malaysian, Australian and Oceanian regions.

Some species of Ornebius have been sporadically described from some islands in the southwest Indian Ocean: Seychelles, Reunion, Mauritius, on some Comoros islands. Apart from the Seychelles, these islands are of volcanic origin Ornebius; the Ornebius have therefore managed to do so by sea and have evolved there by forming endemic species.

To propose an answer to this question, one approach is to study the relationship between the Ornebius, for example by studying their DNA sequence. This phylogenetic approach makes it possible to determine the species closest to those of the southwest Indian Ocean, and to see if the species of these archipelagos form a monoplytic group (grouping together all the descendants of the ancestral colonizing species).

It took about twenty years to collect the specimens necessary for this work, visiting the Comoros, Seychelles, Mascareignes on numerous occasions.

These islands are relatively poor acoustically : the nocturnal sound atmosphere of the preserved areas is dominated by the chirping of a small number of crickets and grasshoppers. It is therefore easy to spot unknown songs “by ear”. It is by using this method that it was possible to effectively collect Ornebius on the islands visited. As each Ornebius species has a distinct song, this approach has led to the discovery of many new species, but also to the measurement of population densities and the assessment of the impact of different nature reserve management methods.

The results of molecular phylogeny suggest that apart from one only species from the Seychelles, all species from the islands of the southwest Indian Ocean are related, and could derive from a single colonizing ancestor.

Mascarenes are a remarkable example: there are seven species of Ornebius, more than in any other island in the southwest Indian Ocean. Most of these species are new to science (under description). On each island, there is at least one species of Ornebius associated with Pandanus (monocotyledons that have diversified tremendously in the Mascarene Mountains), and another more general on Dicotyledons.

Intuitively, it seemed likely that the Ornebius associated with the Pandanus form a group apart, distinct from the other species of the Mascarenes, phylogeny invalidated this hypothesis.

Most probable history of colonization of the islands of the Indian Ocean by the ancestors of the current species of Ornebius (myr : million years) (Source : S. Hugel)[/caption]

This species is the basis of all Ornebius in Mauritius and Réunion, including species now associated with broadleaf weeds. There would thus have been in the history of these insects a single association with the Pandanus followed by a colonization of the other islands of the archipelago then the libranchissement of the link with the Pandanus, which would thus have largely favoured the diversification of the Ornebius of the Mascareignes.

Passion-entomologie would like to thank Sylvain Hugel, neurobiologist at the CNRS and world specialist in Orthoptera (locusts, crickets and grasshoppers), for writing this exciting article and for sharing his latest discoveries !

Sylvain Hugel is also working on the determination of Orthopteran specimens collected in the Makay massif during last April’s exploration mission here.

Sylvain Hugel is part of the team that brought the only documented case of pollination by an insect belonging to the order Orthoptera (2010). This discovery is all the more interesting because it concerns two extremely rare and endemic species of the islands of Reunion and Mauritius: a grasshopper of the genus Glomeremus and the orchid Angraecum cadetii.

To learn more about this discovery : here.

Another article on orchid pollination : here.

Recommendations of works on this theme :