The Heliconius are butterflies found in the tropical forests of Central and South America. They are known and studied by science for their ability to mimic each other and adapt quickly to changes in colour and behaviour. Within each species there are populations with different colour patterns, similar to other populations of different species in the same geographical locality.

This process of mimicry takes origin in a particular structure of their genome and on the Müllerian principle which consists in resembling toxic species to escape predators who learn not to consume a certain coloration.

A theme on which I had the chance to work at the Muséum National d’Histoire Naturelle de Paris ici. To learn more about genetic mechanisms, I invite you to read this article on the evolutionary history of the origin of the coloration of these butterflies.

In addition to these features, butterflies Heliconius are interesting from other points of view.

In their eating behavior :

Unlike other butterflies that feed on floral nectar, Heliconius have the particularity of feeding on pollen. Thanks to their proboscis (= the tube), the 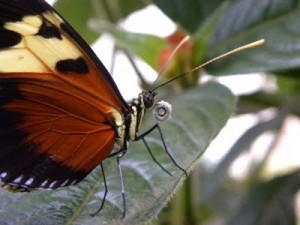 H. hecale melicerta feeding on pollen collected on its proboscis (trunk) – Photo by B. GILLES[/caption]

butterflies collect the pollen grains that aggregate to form a ball (see photo and video opposite). Then, by mechanical actions of the mandibles and digestive secretions (saliva), pollen is degraded, absorbed and digested.

This food mode is unique in butterflies.

As is common in insects and especially butterflies, each species is inferred to one or more specific host plant species. The Heliconius are no exception to this rule, either as larvae (caterpillars) or as imago (adults).

– A l’état adulte : Butterflies feed on pollen from plants such as Psiguria and Gurania (Cucurbitaceae family), Psychotria and Palicourea (Rubiaceae family) or de Lantana camara (Verbenaceae family). The flowers of these plants, being drowned in the dense vegetation of the tropical forest, are difficult to spot. A process of co-evolution has developed between butterflies and these plants. The flowers have taken over an easily identifiable colour, such as red, and the butterflies have acquired the ability to perceive the colours and memorise the location of these flowers.

Some species of Heliconius show behaviours of loyalty, territoriality and defense of these flowers against the arrival of other individuals they actively repel. An unusual behaviour in insects and rare in butterflies.

The density of host plants is rather low, females, to avoid too much competition and mortality between larvae, lay only 2 or 3 eggs daily at the end of the stems (see video). The caterpillars are thus left with enough food to complete their larval cycle. This behaviour is unique because butterflies usually lay tens or even hundreds of eggs at a time.

Host plants, during evolution, to protect themselves from attack by Heliconius, a strategy was developed which consists in erecting outgrowths at the end of stems (or base of leaves) imitating the shape and colour of eggs. Thus, a female that comes to lay eggs robs herself of the stem thinking that it is already occupied. Passionflowers also have nectaires (glands that secrete a sweet and nutritious liquid) at the base of leaves that attract ants, egg predators and young caterpillars.

It is indeed possible to catch them, to handle them easily, to control their reproduction (crossing, harvesting of eggs), to feed them artificially (see photo album) and to carry out experiments in genetics, ecology or ethology for example.

I was able to conduct research on these themes within Mathieu JORON’s team at the Muséum Nationale d’Histoire Naturelle de Paris, and at the Smithsonian Tropical Research Institue (Panama). Some of my results were published in the journal Nature/Heredity (25 March 2015) : to read ici.

For more information, do not hesitate to contact me, I am at your disposal.

Many videos retracing the different stages of the development cycle of a Heliconius butterfly :