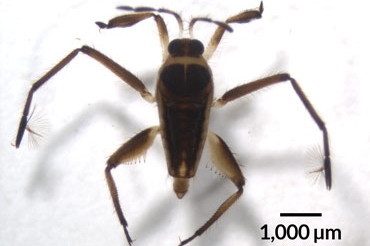 Evolutionary innovations result in the appearance of new structures or behaviours during evolution (ex lien), a coloration pattern in butterflies (lien). The theory predicts that these events of appearance are unique to each innovation and rare. Thus innovations are shared by groups of related species, taxa (e.g. angiosperms, birds, turtles, insects, butterflies respectively). The emergence of new structures is the first mechanism by which innovations contribute to the diversification of living organisms.

An innovation is considered key, important, when it allows adaptation to a new ecological niche via a new function. The theory predicts that the ecological opportunity thus created will allow the species with the innovation to diversify into groups of species. It is the second mechanism by which innovations contribute to the diversification of living things. Thus, they shape the evolutionary trajectories of the lines in which they appear.

The importance of some of these innovations makes researchers wonder about the genetic and developmental mechanisms behind them. They seek to link genetic, phenotypic and adaptive changes to a new environment.

In an attempt to answer these questions, Khila Abderrahman’s team (CNRS-UMR5242, University of Lyon) studied the genetic mechanisms and environmental pressures underlying the evolution of the “propellant fan” (photo 2 below), exclusive structure of bedbugs of the genus Rhagovelia (Heteroptera, Gerromorph, Veliidae) that allows them to propel themselves to the surface of water.

Their results highlight the central role of genes that are taxon-specific. One of them is present only in water bugs and the other only in the group that has the fan (genus Rhagovelia). Both genes are involved in the development of the fan. Moreover, the use of biomechanical tests has proven the essential role of the range in adapting to a new environment, thus acting as a decisive innovation at the evolutionary level.

Biology and description of Rhagovelia

The genus Rhagovelia (photo 1 below) is made up of ∼ species whose life cycle occurs, in general, on the surface of small fast water currents – ecological niche not or not very accessible to most other semi-aquatic insects -. These aquatic bugs move on the surface by rowing movements of the pair of middle legs where the fans are located. A fan consists of about 20 primary branches (or tops) each, with thinner secondary branches (photo 2 opposite). Unlike Rhagovelia, the closely related genus Stridulivelia has no propulsion range. Although the species of both genera occupy the same watercourses (sympatric species), chinch bugs of the genus Stridulivelia remain static on the leaves of plants and only occasionally make rapid movements (see video 1).

The embryonic development of the fan begins between 144 and 210 hours, 35% of the total duration of embryogenesis (at 26°C). The first instar larvae hatch with fully functional fans, renewed during each of their five mouts, indicating the persistence of the fan development program throughout the post-embryonic stages (illustration 1 below).

To identify the genes at the origin of the development of the fan, the team of scientists carried out a transcriptomic profiling (study of all the messenger RNA produced during the process of transcription of a genome) of the embryonic legs at Rhagovelia antilleana. The study of the expression of these mRNAs made it possible to identify 5 genes expressing only in the pair of median legs and at the place where the fan develops: y (yellow), cp19 (cuticular protein 19), ccdc174 (coiled-coil domain-containing protein 174) and two similar unknown genes (c67063_g1 and c68581_g1, respectively named geisha and mother-of-geisha) (illustration 2 below). None of these genes are expressed in the front and hind legs of R. antilleana or any other related species such as Stridulivelia tersa and Oiovelia cunucunumana.

Examination of the expression of these two genes revealed that geisha was expressed three times more strongly than mother-of-geisha in the median legs. Thus, not only the protein sequence of these genes diverged, but also their level of expression.

Knowing that mother-of-geisha and geisha are specific to Hemipterans and Rhagovelia respectively, and that they are expressed at the place and time of fan development, the scientists wanted to test whether they were involved in the development of this structure. To do this, they inhibited the expression of these genes during larval development. Thus, inhibition of gene expression mother-of-geisha and geisha has resulted in reduction to fan disappearance, while allowing the development of viable individuals without further phenotypic modifications of other structures (including claws directly related to the fan) (Illustration 4 opposite).

The suppression of the gene y“yellow” resulted in the development of the phenotype “yellowish fan” instead of dark brown. This gene known to intervene in the formation of dark pigments, and preserved within the genus Rhagovelia, has therefore been recruited to darken the cuticle of fans.

The overpressure of genes cp19 and ccdc174 known for their involvement in cuticle development did not cause detectable disturbance for unidentified reasons.

mother-of-geisha, duplication of geisha, rapid evolution of the sequence of geisha) and the genetics of fan development (these two genes are strongly expressed in the presumptive territory of the fan, their expression is necessary for fan development, yellow was recruited during the evolutionary process). To finish reconstructing the evolutionary history they tried to understand how these changes were adaptive.

Studies of displacement and behavior

A major objective of evolutionary biology is not only to identify the genetic mechanisms underlying novel traits, but also to determine the impact of innovations on the evolutionary history of the organism. In order to determine whether the fan innovation allowed adaptation to a new niche, researchers tested whether it might have participated in the invasion of small rivers where Rhagovelia live. Thus, they had fun comparing the locomotion performance by high speed videography of individuals moving at the water surface from Rhagovelia : 1) normal (with fan), 2) without fan (surgical ablation), 3) with rudimentary fan (inhibition of genes mother-of-geisha and geisha), 4) Stridulivelia tersa, a close species without fan, also living near streams but rarely venturing to the surface.

First, the researchers simply confirmed that only the range was affected by gene inhibition mother-of-geisha and geisha, and that the remaining rudiments such as claws were normally deployed and retracted.

Scientists compared the locomotor performance on the water surface of individuals in these 4 groups. The first comparison was made in standing water. For this, Stridulivelia tersa are faster than the 3 groups of Rhagovelia which are all 3 at the same level. However, Stridulivelia tersa and Rhagovelia without fan make more paw beats per second. The researchers conclude that on stagnant water fans are not used to increase the average speed but allow to decrease the frequency of beats.

A second experiment consisted in forcing groups of individuals to row against a slow (0.2m/s) and fast (0.3m/s) water current, simulating the R environment. antilleana. Although individuals of S. tersa were faster in standing water, they were washed away by slow, rapid currents. Individuals R. antilleana normal (control) currents, on the other hand, have ascended both types of current without difficulty. In a consistent manner, individuals R. antilleana, having undergone the ablation of their fans, have not succeeded in ascending the fast current, and their performance has strongly decreased in the slow current. Individuals with rudimentary fans had an intermediate performance. In fact, beat frequency analysis shows that animals with fan or rudimentary fan ablation try to compensate by beating more times per second. In some cases this is enough, but not always.

The researchers conclude that the range increases the efficiency of beats by increasing the surface area of the leg in contact with water and the effectiveness of each thrust by transferring a greater amount of energy. As a result, fewer strokes are needed in standing water, and faster peak speeds help combat the current.

Location performance was not affected by gender.

Finally, scientists assessed the ability to make tight turns, a behavior characteristic of Rhagovelia species. They found that the turns of normal individuals (controls) were systematically initiated by the deployment of fans and were performed with an average angle of 77°. Individuals in both groups without fans (inhibition and ablation) rotated less effectively with an intermediate angle of 111° and 126° respectively.

The results show the link between genetic mechanisms of development, evolutionary and ecological when innovations like the range emerge.

The phylogenetic order of these molecular events remains unknown. The researchers have reconstructed much of the evolutionary history of the spectrum and propose the following scenario. Initially, the gain in function of former development programs in the second pair of legs allowed the appearance of a rudimentary fan. Then, duplication of the geisha gene and its involvement in development improved the range. Each of the stages could be selected during the adaptation to the new niche represented by the rivers. This study also provides an experimentally demonstrated and clear example of how an evolutionary novelty can gradually emerge from simpler structures; a key evolving question.

Recommendation of books on this theme