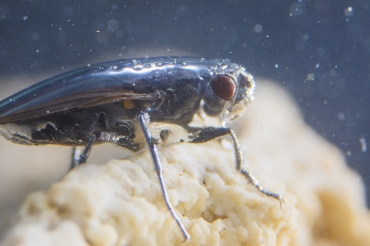 Summer, the shores of Mono Lake in California are invaded by millions of small flies. The density is such that it sometimes reaches in places more than 2000 flies on the surface of a postcard, for a total population estimated at more than 100 billion individuals. These flies belong to a species: Ephydra hians (Ephydridae). Adults are known for their surprising and unique lifestyle and underwater behaviour: they have the ability to immerse themselves completely underwater both to feed and to lay their eggs.

The first observations and descriptions of the habits of this insect go back 150 years and were made by the writer Mark Twain (1835-1910) under these words you can keep them under water as long as you want – without that bothers them – they are only proud of them. When you let them go, they come to the surface completely dry, and walk as recklessly as if they had been educated to offer instructive entertainment to man“.

Biology and ecology of Hephydra hians

Ephydra hians is a 4 to 7mm, dark brown with metallic green highlights on the chest. The species has the particularity to develop in waters with high salinity, explaining its name alkaline fly. The water in Lake Mono has a salt content three times higher than in the Pacific Ocean, with a high concentration of sodium bicarbonate (NA2CO3), which gives it a particular alkalinity (pH=10). This salinity results from the non-renewal of water for 60,000 years and from regular and constant evaporation. The calcium (CaCO3) that accompanies it comes from natural sources.

Hormis E. hians, only algae, bacteria and halophilic shrimp tolerate this environment. Adult flies, living between 3 and 5 days, can feed on algae and lay eggs without fear of competition or predation. The ecological role of this lake is very important in this region because it provides a food resource for nearly 2 million migratory birds that stop here each year (for example, 85% of the gull population in California join the lake to nest) (see video at the bottom of the page).

It is essential for these flies to remain dry for their survival. Being wet would deposit a thin layer of minerals on their cuticle (external skeleton of insects), thus increasing the probability of being wet again the next time they come into contact with water. To protect themselves from the harmful liquid element during diving, the flies surround themselves with a protective air bubble covering both the body and the wings. This ball thus allows them to protect themselves from salts and alkaline components and to bring oxygen such as an external lung (photo opposite). Thanks to this suit, the fly can stay submerged for about 15 minutes at depths of 4 to 8m. To reach the surface, she lets go and simply lets herself go where she will float, walk on water or fly away (see video below).

Gold, for 150 years, the formation of this air bubble and the ability of Ephydra hians to immerse itself in such alkaline waters have remained a mystery to science. This is why two scientists from the Biology Department of the California Technical Institute (ITC), Floris van Breugel and Michael Dickinson conducted studies on the unique physico-chemical properties of the cuticle of these flies responsible for the formation of the air bubble (partly funded by the National Geographic Society).

The cuticle of the Ephydridae fly family is covered with many tiny hairs (setae) and waxes (hydrocarbons).

To better understand the physico-chemical phenomena at the origin of the hydrophobic power of hair, scientists first observed under a microscope the appearance and distribution of hair on the surface of the cuticle. They found that these flies had a 36% denser carpet of hair on their body and legs than other related species of flies (34% on the wings, 44% on the thorax, 47% on the abdomen) (see photo opposite).

Then, to measure the tension forces on the surface of the water and cuticle of these insects, they built a tiny sensor and plunged hundreds of individuals from E. hians, and 6 other related species, in a series of different saline solutions with varying salinity, pH and density. The formation of the air bubble on the cuticle surface was observed using high frequency cameras and mathematical analysis software.

The results show that only E. hians has the ability to form and maintain an air bubble in waters so rich in sodium bicarbonates (NA2CO3). This capacity would only result from a few minor changes in the physico-chemical properties of hydrocarbons and hair. The stain removal and cleaning properties of NA2CO3 are long known (solution used in ancient Egypt to embalm mummies). Like the Mickael Dickinson signal, the lake water is better suited for washing clothes than for living there! This adaptation has probably evolved over time with the slow and gradual increase in mineral salt concentrations such as NA2CO3 in Mono Lake (and other lakes around the world).

Recently, selection pressures on Mono Lake alkaline flies have become stronger. Due to a policy of diversion of water from the Eastern Sierra led by the city of Los Angeles between 1941 and 1982, the concentration of salts in the lake doubled. However, scientists have shown that this rather sudden increase in ions affects larvae more than adults.

The main adaptation that allowed E. hians to access this alkaline environment does not rely so much on the physico-chemical properties of its hairs or cuticle as on the appearance of underwater displacement and feeding behaviours. Scientists suggest that these behaviours may have occurred during periods when surface food availability became limiting, with underwater algae offering an abundant alternative. Due to the absence of competition and predators such as fish, the selection pressure on these underwater behaviours has remained rather low. The air bubble does not cover the fly’s red eyes so that its vision is not distorted (photo above), and its legs are equipped with claws longer than those of related species to allow it to move on the bottom in the vicinity of the lake banks (see video below).

The environment of Mono Lake is fragile and endangered by the appearance of two phenomena : 1) Diversion of waters upstream of the lake which increases the concentration of salt to levels beyond the tolerance threshold of the fly Ephydra hians ; 2) Formation of a sunscreen film on waters coming from occasional swimmers which alters the physico-chemical properties of waxy hairs.