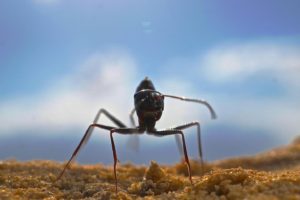 Cataglyphis fortis Ants meet in the desert areas of North Africa where they look for the corpses of small arthropods. To move and locate in relation to the nest in an environment where spatial landmarks are rare and constantly evolving, these ants exploit by crossing data indicating their direction and the distance travelled from the nest.

Some workers can cover almost 1.5 km around the nest, navigation errors may occur. In order to overcome them and locate the entrance of the nest, the ants use other senses such as the recognition of the panorama surrounding the nest, the olfaction (following the diffusion of carbon dioxide emanating from the nest) or the memorization of odors Present in the vicinity of the nest (the smell of Cataglyphis fortis, particularly developed, intervenes in the search for food: For example, these ants possess a high sensitivity to derivatives such as linoleic acid diffusing corpses of arthropods).

For this, these scientists have conducted several experiments.

The first experiment was to determine the molecules whose attractiveness stemmed from the innate or the acquired. For this, scientists have developed a protocol composed of four steps.

It turns out that for 23 of the 32 molecules tested, the training allowed to significantly increase the lure for the molecule (Figure B), showing an apprenticeship in the association of odors with the food.

In nature, ants must learn to make these associations and discriminate different sources of odours in order to find the best sources of food.

The continuation of the study was interested in the speed of memorization at the basis of the creation of such associations. On the same principle as the previous experiment, ants were put in contact with a food and a smell. A single impregnation improves the attractiveness of a molecule and thus the association of a smell with a food source.

For the duration of remembrance, entomologists have led ants to associate odours with food for two hours. They then marked them with colored dots to identify them. The experiment consisted of testing ants marked from 1 to 26 days after learning.

The results are astonishing: more than 80% of the tagged ants followed the scent 24 h after learning, and 43% of them after 26 days. These data suggest that ant memory persists for several weeks!

After completing these tests on a single odour, the entomologists wanted to know how many odors the ants could memorize. For this, they have caused ants to associate 14 odours in successive ways. The ants followed the 14 odours demonstrating that they have the ability to memorize at least a dozen molecules and associate them with food sources.

Because subsequent work has shown that the rate of acquisition of the nest-specific olfactory signal in ants was slower than that associated with food sources (link) and that the memory associated with odour/food association could extend Almost a month after learning, scientists were interested in the olfactory memory related to the nest.

For this, their experience, based on the same system as before (column of 4m long between the entrance of the nest and the source of food (Figure 3a)), consisted in memorizing to ants the Association of the olfactory signature of the entrance of the nest with a Test odor. During a return to the nest from the food source, the ants were placed in another pipe in the presence of only the molecule tested. The tests were carried out with ants having spent more or less time outside the nest, others were brought into contact with the olfactory signal of the nest after a period of isolation.

It turns out that ants have shown great difficulty in moving around and locating the supposed nest entry (Figure 3a). Contrary to the memorization of odour/food Source Association, these results show that the ants would hardly associate the olfactory signal of the entrance of the nest with another odour, and that the memory of this signal fades rather quickly ( About 30 minutes) in the absence of regular contact with him.

Thus, it seems that the Fortis Cataglyphis have two distinct olfactory memorization strategies.

1) A strategy would be linked to the search for food and would be based on adaptive memory. During the life of a worker, 6 days are devoted to research and food collection, during this period she must learn quickly to make associations smells/food to collect and bring the maximum of food in a Unpredictable and changing environment. These associations would allow ants to locate new resources more easily by following olfactory sources already encountered and successful. The real surprise of this study is the ability of ants to remember odors after 26 days, while the period they spend searching for food lasts only 6 days.

These data are related to the discoveries on leaf-cutting ants, also known as ants-mushroom growers (read this article and this article). These ants cut out pieces of leaves to feed a substrate where a fungus is developed that they feed exclusively. Memory studies have shown that these ants could memorize odors for more than 2 months (18 weeks). This capacity would have been acquired during evolution because the survival of the fungus is vital to the survival of these insects. To remember durably the best sites of the most palatable foliage would thus bring a net selective advantage.

Although the geographic position of the nest is mainly based on visual storage of the Environment (read this article), ants also take into account the nest-specific olfactory signal. Within the same colony, all individuals are impregnated with the olfactory signal specific to their nest and diffuse it. Thus, each ant remains in constant and regular contact with the signal which does not need to be memorized durably. A 30-minute memorization is therefore sufficient for an ant in search of food, which, at worst, has the possibility of returning to the nest using its visual memory.

To learn more about the desert Cataglyphis, follow this link

Recommendations of books on this theme: