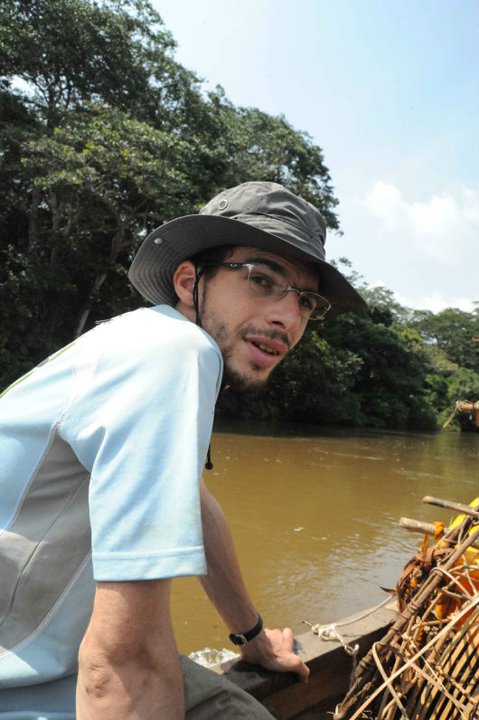 Nicolas MOULIN is a young independent entomologist who created his entomology research and expertise office 9 years ago. You can discover these very rich activities at this address: http://www.nmentomo.fr

I would like to thank Nicolas for having accepted to answer my questions, for his reactivity, his enthusiasm and his kindness. Nicolas thus makes us discover another way of living from entomology.

I am 34 years old, I have been a self-employed entomologist for 9 years (with one or two employees for 5 years). I am originally from Paris and now adopted from Rouen because of an unfunded thesis and choices to make in my partner’s life.

This passion came to me a long time ago when I was on vacation in the Limousin countryside with my maternal grandparents. My grandmother was fascinated by butterflies and pinned some of them. I took the virus running through the countryside and scouring the mountain paths of the Alps with my parents, as well as climbing rocks.

In insects, their diversity and adaptability always surprise me.

It’s a chance… Yes because I live my passion. But I am an entrepreneur… And it’s not easy every day.

My company mainly offers expertise services, species/population monitoring, diagnostics and impact studies. It also offers training in entomology and business creation in the environmental field. Finally, some animations allow us to cling to humans and not to stay alone with our dear insects.

As I said, I worked alone for the first four years. I had several employees before stabilizing my collaborations with a very talented collaborator. I am really satisfied and we work well together (I think!).

We are just as willing to work alone as we are to work in collaboration with design offices, research institutes, local authorities. It’s the public markets that dictate our pace.

Finally, I maintain my undeclared researcher cap by working a lot on the systematics and ecology of mantises. They’re the ones who bring me to the tropics so regularly.

I am a pure product of the university : a DEUG from SVT in Orsay (91) then a Licence in Tours with the prospect of passing the DESS on insects because it was the last existing diploma with the word entomology in the title… But a Master 2 pro was then created at MNHN (Muséum National d’Histoire Naturelle de Paris) : E2F, Expertise Faune-Flore, which I finally followed up on Paris.

During all these years, and since the summer of my baccalaureate, I have not stopped doing internships around insects: from simple assistantship of a PhD student in the field to my internship in a Conservatory of Natural Spaces for the Bac+5. Very often, my internships have been carried out by a research structure (Research Institute for Development – IRD). So I was torn all along my course between research and applied…

For my company: during all my Master 2, I wondered what I was going to become, vegetate for years with a thesis waiting for a place at the MNHN (unexpected)… or be proactive and create my own work. Not being very patient, I chose the solution 2.

I didn’t see any stable horizon for an entomology enthusiast so I started my business four months after my M2 pro diploma. And it’s been nine years now…

This was not without setbacks: lack of money, competition on public markets, total lack of knowledge in accounting, management, business management. I learned everything on the job, with training, and unfailing support from my parents and family. Money, unfortunately, remains the nerve of the war…

In France, we are not many to work on the mantises: three unofficial people (including me) and one official person (who could be our grandfather and whom I value very much!). The mantises (… yes I prefer that one say the mantises because they are without religion, hehe) are exceptional ! It is one of our biggest predators in insects with beetles (Carabidae), some Hymenoptera (wasps, bees…), Odonates (dragonflies…). They are very diversified with breathtaking morphologies. We find them in almost all parts of the world (except poles and too cold environments), from sea level to high altitudes (read also this article on their evolutionary history).

Thanks to them, I am recognized as a field school entomology supervisor (ECOTROP) in Africa, currently in Cameroon and Gabon. I use them as biological models when we train students. So I have data on them every year since 2011. But I don’t lose interest in other American and Asian species, just as captivating.

If we speak ECOTROP : these are missions co-organized by public research structures like the IRD, the CEFE (Centre d’Ecologie Fonctionnelle et Evolutive), by French, Cameroonian and Gabonese universities…, by local structures such as the ANPN (Agence Nationale des Parcs Nationaux du Gabon) or the WCS (Wildlife Conservation Society). In two weeks on the spot, we try to show students from all horizons and different nationalities what research work in the tropics is: in entomology, but also in paleo-environment, health biology, social sciences…

To sum up, I am the only contractor on the team… But it shows students that there is not necessarily a research world to get by in.

All logistical issues are handled by the organizers. I’m an entomology supervisor who… puts a lot of salt in! But not organizer, nor project leader.

The insects collected are very targeted during ECOTROP missions. They are kept by those likely to study or value them. Personally, I only keep the mantises to carry out taxonomic revisions, to bring biogeographic information or to publish the interesting results obtained during a workshop carried out with the students. Finally, I feed a lot of barcoding projects: I have a COI (Cytochrome Oxydase-I Gene) sequence reference library on BOLD (Barcode of Life Diversity System) for more information here.

Until I have finished all the items I started… 3-4 descriptions are in progress. But it’s long! On the other hand, I bring a lot of information on other taxonomic works of international colleagues.

Let the force be with them !

Let them listen to their hearts ! I’m not going to indicate the applied side any more than research entomology. Everyone has to make their choice. In any case, I would be happy to advise young people who are applicants.

Ah ! Entomology! its amateurs, its professionals, its amateur professionals (because they love insects!). It is difficult. Passionate, we are all bug lovers. We practice entomology, at weekends, during holidays, during trips… We want to live off it… I don’t know what the future of our discipline will be: empty museums of taxonomics, myriads of individuals following participatory sciences, entomologists not trained enough (because more training…) in design offices… I don’t know…while insects are so numerous…

A fresh anecdote then…

During my recent stay in Gabon, in December 2015, I set an aerial trap in the trees, which is very close to my heart. I made alone a twilight switch that turns on a UV neon at dusk and turns off at dawn, all powered by a car battery. The setting up is often long and exhausting under tropical conditions especially if one wants to position it as high as possible in the trees. So, one morning when I was put in place, I was “pricked/burned” at the elbow by something in the surrounding vegetation. I don’t see/see what it is… We make the best and worst assumptions from the beginning. I spent one of my worst days in the tropics in terms of pain and swelling (localized and that we followed hour by hour with felt drawings). After X drugs ingested… the pain subsides and we go hunting at night. Around midnight, we decide to go down my trap to see what it is… And there we come across the culprit (see photo opposite): a beautiful caterpillar of Limacodidae. Insects are fascinating, diverse and adaptable without limits…