The first flowering plants to appear in the trias (-200 million years) diversified during the Cretaceous and all the Tertiary.

This major innovation in plant evolution has allowed the emergence of associations with other organisms such as insects. The co-evolution of plants/insects has generated varying degrees of mutualism (positive interactions between two species): the plant offering a food resource and the insect, in exchange, ensuring its pollination.

In 2016, entomologist George Poinar discovers in amber the oldest evidence of such an association between orchids and beetles. This discovery provides interesting knowledge on the evolutionary history of angiosperms and on the establishment of plant/insect associations.

This discovery is challenged by some specialists like James D. Ackerman. Passion-Entomologie asked him the question, find his answer in the box at the bottom of the page.

Orchids are extraordinary plants that have developed a unique pollen dispersal strategy. These grains are grouped together in small capsules (pollinia), covered with adhesive strips (viscidia), fixed to a support (caudicles): the whole structure forms the pollinarium. 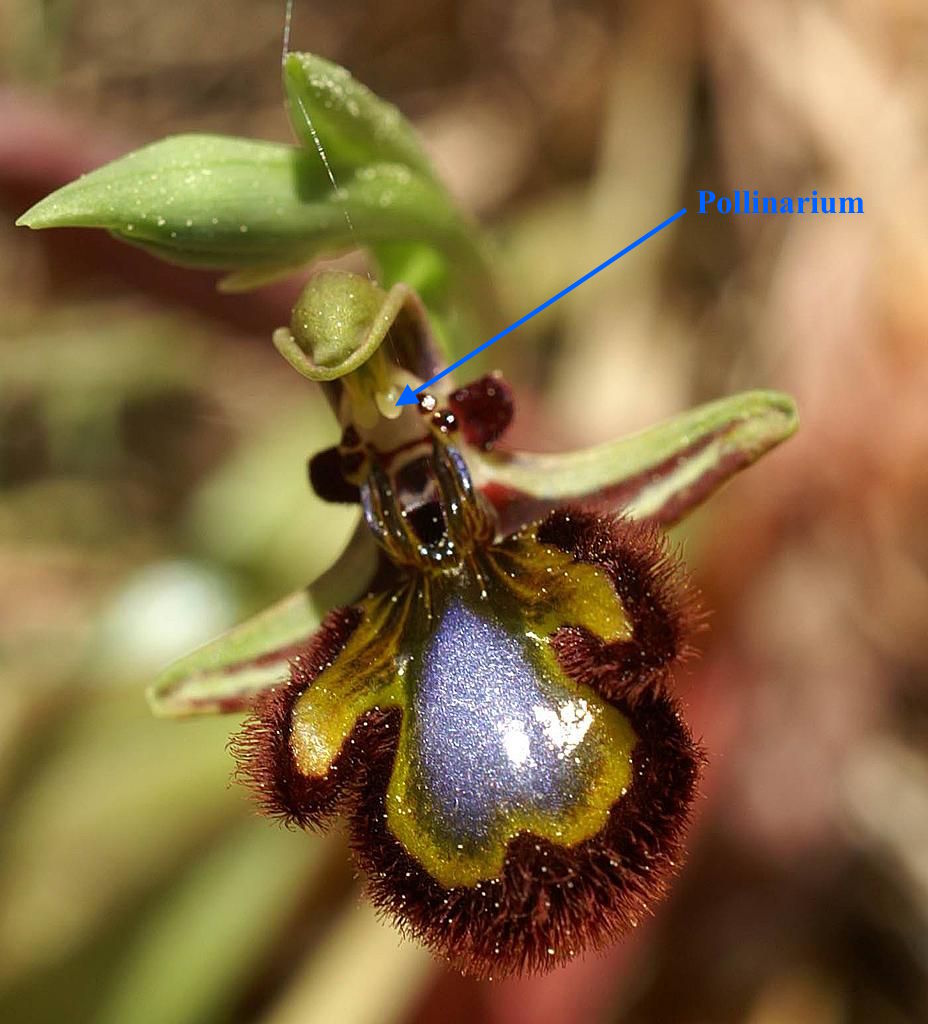 Unlike other plants whose pollen grains, free, are subject to hazards (wind, rain, pollinators, predators…), those of orchids, protected by their pollen, require a messenger to pollinate other flowers. To do this, orchids have developed a range of ingenious mechanisms to attract potential pollinators, most of which are insects. The attractiveness of the flowers is accentuated for example by an abundant secretion of nectar or by mimetic systems (example: orchids of our countries of the genus Ophrys whose flowers imitate solitary female bees Eucera sp). ( picture opposite).

Insect/orchid associations take many forms: from a simple visit to flowers to collect nectar to a specific pollinator role like the sphinx Xanthopan morgani. This moth, the only representative of its kind and the largest sphinx in East Africa and Madagascar, is the unique pollinator of the orchid Angraecum sesquipedale, whose floral stem measures 20-35 cm (photo opposite).

Among these insects, beetles find in the flowers and vegetative parts of orchids, depending on the species, refuge, food resources for both adults and larvae. The attractiveness of the plant rests in certain orchid species on the secretion of molecules specific to one or more types of beetles: these plants are called “cantharophilous” (=”friends of cantharids”), pollinated by beetles.

In the spring of 2016, the American paleo-entomologist George Poinar, Professor at Department of Integrative Biology at the University of Oregon, brings the first evidence of the remote existence of this association of beetle/orchid pollination thanks to the discovery of two fossils in pieces of amber dated 20-25 million years.

On the first specimen, a weevil (Curculionidae-Cryptorhynchinae), from the Northern Cordillera of the Dominican Republic (photo 1), are attached to the pollinias. In the second specimen, belonging to the family Ptilodactylidae and coming from the Simojovel region in Chiapas, Mexico (Photo 2), pollinia are observed on the buccal parts.

After a precise study of pollinaria, George Poinar identified and determined with precision the genus to which they belong. Thus, pollinaria found on the weevil, consisting of long cylindrical pollinia (2×1.8×0.3mm) and spherical viscidia, belong to the genus Cylindrocites (Orchidoideae-Cranichidae). Ptilodactylidae has been associated with the genus Annulites (Orchidoideae-Cranichidae) (Illustration 1 opposite).

The genus Cylindrocites belongs to the Spiranthinae sub-tribe which includes 40 genera and 400 species, all neo-tropical and mostly pollinated by bees. Today, no species in the Cryptorhynchinae subfamily feed or visit this type of plant, except for a few recorded cases. However, larvae of many Baridinae species such as Orichidophilus aterrinus and Omobaris calanthes grow at the expense of these plants. Weevils are known to be pollinators of other plant families such as Eupomatiaceae, Degeneriaceae, Myristicaceae or Annonaceae.

The genus Annulites consists with 150 species divided into 9 genera the sub-tribe Cranichidinae most of which are terrestrial, opposite to epiphytic tree species. Nearly 450 species of Ptilodactylidae beetles related to orchids have been recorded to date, but surprisingly, this fossil offers the first case of association with pollinia.

A team of scientists brought, in 2010, the only documented case of pollination by an insect belonging to the order Orthoptera. This discovery is all the more interesting as it concerns two extremely rare and endemic species of the islands of Reunion and Mauritius: a grasshopper of the genus Glomeremus and the orchid Angraecum cadetii.

For more information on this discovery here.

Recommendation on this theme