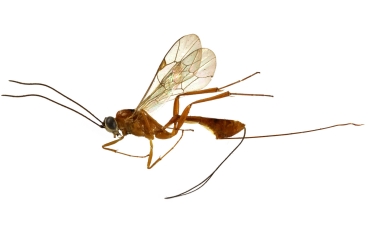 In the world of parasitoids (lire this article), the ovipositor, also called oviscapte (abdominal appendix with which eggs are deposited), has a crucial role since it allows to locate precisely the egg laying in space and time, which is essential when it has to match the biological cycle of the host. Before addressing some surprising particularities, it is first necessary to give some details about the structure. In most insects holometaboles, the ovipositor is a simple tubular growth around the genital opening, but in hymenoptera it has retained a much more complex primitive structure, called “lepismoid” it is actually two pairs of hollow valves that form the ovipositor strictly speaking, and are protected by a third pair, the sheath.

Illustration 1 : Cross section of a “standard” hymenopteran ovipositor, showing the two pairs of valves and their sliding joint. In medallion, photo MEB showing the ctenidia lining the inner surface of the oviduct and preventing the reflux of the egg during egg laying (Source : simplified after Quicke, 2015*)[/caption]

The first pair is coaptée into a single upper piece that fits into a second pair formed by two lower valves, all forming a tube around the oviduct from the genital opening (illustration 1 opposite). These two pairs are linked by a mechanical system forming a longitudinal slide: the lower face of the upper valves forms a pin which is inserted into a rail carried by the lower valves. Thus, the two pairs can slide relative to each other, which plays a crucial role during oviposition. In fact, the ovipositor itself does not contain any muscle: the passage of the egg is ensured both by the relative friction of the hollow valves and by the contraction of the abdominal muscles. The inside of the valves is also equipped with comb structures that prevent the egg from flowing back during egg laying.

Curiously, some ovipositors have particularly sinuous shapes (Photo 1 below). The usefulness of such a geometry has long been questioned, a priori more annoying than anything else when it comes to perforating a substrate. It is still easier to perforate the ground with a needle than with a spring… Then it was realized that the relative movement of the valves of a sinuous ovipositor is interesting in that it changes its vertical orientation. Thus, by playing on the friction of the two valves, the female guides the end. You understand the utility of the device when it comes to reaching a host buried in a non-rectilinear gallery? Medical research has also rushed to recover this small natural wonder to navigate microsurgical instruments inside blood vessels.

The basic structure of the ovipositor is therefore similar in all parasitoids. But this structural unity is associated with a very high morphological diversity: the shape and size of the organ vary enormously from one group to another and even within a group. The reason is simple: the general structure of the ovipositor is related to phylogeny, but its precise form is conditioned by ecology. In other words, the hymenoptera, all having a common ancestor, inherited an ovipositor of similar structure, but these hymenoptera having very variable ecological requirements, their ovipositor evolved secondarily in order to adapt to environmental conditions.

The first line directly related to the ecology of the parasitoid and its host is the length of the ovipositor. Surface-exposed host parasitoids will have an extremely short ovipositor, whereas parasitoids that have to search at great depths will have an impressive relative length. This relative length is often limited to about 1.3 times the size of the insect, which corresponds grosso modo to the size it must have for the insect, in extension on its front legs, to be able to bring its tip forward and direct its laying. However, many parasitoids have developed behaviors or anatomical structures that allow them to exceed this limit. In extreme examples, this ovipositor can be more than ten times the length of the insect’s body. 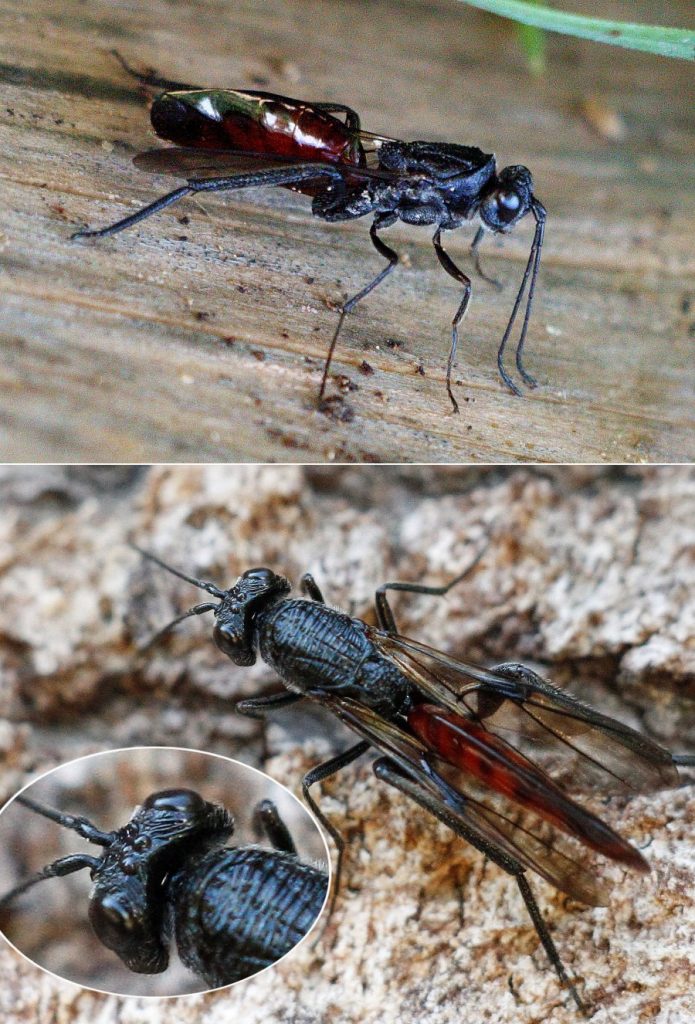 Photo 2 : dorsal and lateral views of a female Ibalia leucospides with her knife blade gastret inside which the ovipositor is wound (Source : B. Mallet, The world of Insects)[/caption]

In most parasitoids, the ovipositor is external and points backwards to the tip of the abdomen (also called the stomach). When this ovipositor is long, the insect drags it behind it, which can hinder its movement and penalize it against predators. Some large ovipositor species have developed storage structures in the course of evolution that are easily imagined to be more comfortable. For example, in the Cynipidae family, the ovipositor forms a more or less complete loop inside the abdomen (photo 2), and it is completely wound in Orussidae, parasitoids of xylophagous larvae. In Leucospidae (photo 3) and some Platygstridae (photo 4), the ovipositor is directed forward and stored on the dorsal surface of the abdomen at rest. 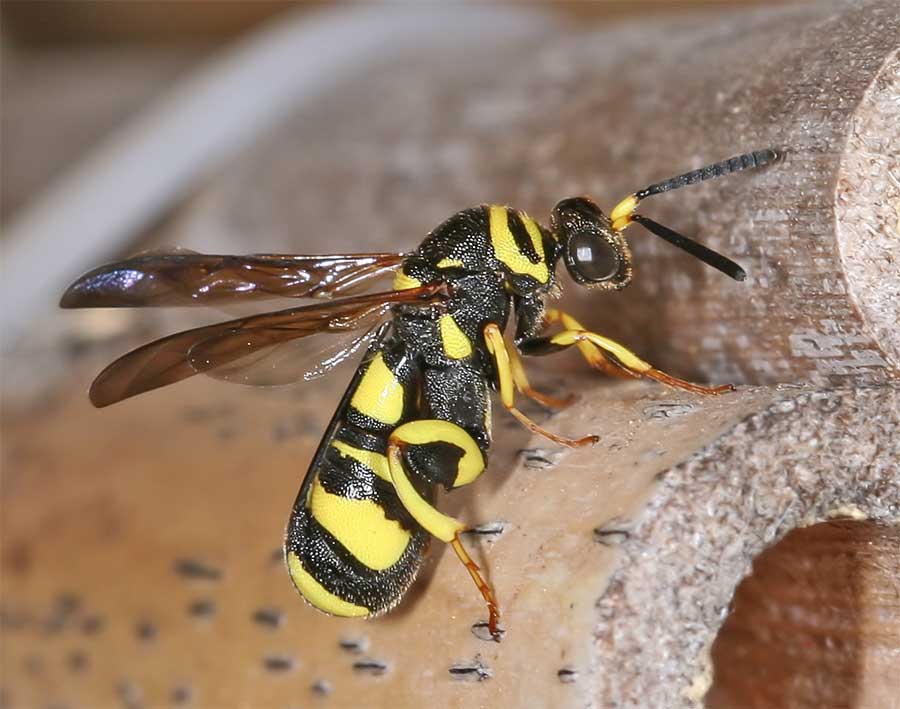 Photo 3 : Female Leucospis will sleep with the sheath of the ovipositor resting on the dorsal face of the stomach and pointing forward (Source : D. Geystor, The world of Insects)[/caption]

In other cases where the ovipositor is particularly long, deployment is facilitated by specific structures. Thus, in Ichneumonidae of the genus Megarhyssa, the outer part of the ovipositor can reach more than three times the length of the body. We can see on this video how the female Megarhyssa atrata proceeds to insert and remove her ovipositor in a trunk in which she looks for a host (see also the videos below) . This delicate manoeuvre is ensured by the complete rotation of the apical segments of the abdomen coupled with the deployment of a membrane resulting from the junction between segments 7 and 8, membrane itself associated with secretory glands. Thanks to this set, M. atrata can reach hosts buried under 14 cm of hardwood, while the animal’s body measures only 4 cm ! 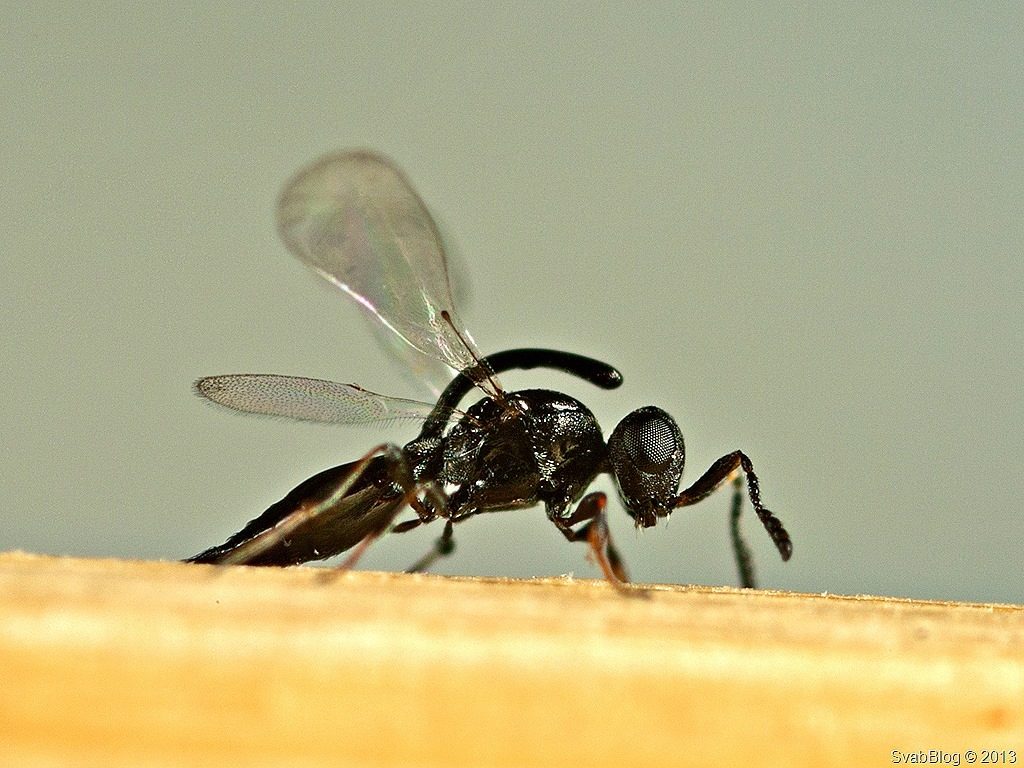 The tip of the ovipositor is also a good indicator of the ecology of its owner. Parasitoids with immobile and fragile eggs as hosts mostly have an ovipositor with a tapered tip, whereas a mobile host, such as a live larva, requires a barbed wire arrowhead tip to provide a catch. Even more surprising is the chemical composition of this ovipositor. Thus, for species whose hosts are found in a hard substrate such as wood, the ovipositor is then reinforced by metallic minerals (manganese or zinc) which ensure its hardness !

Passion-Entomologie would like to thank Pascal Rousse for his new contribution. Pascal is an entomologist researcher, correspondent of the Muséum National d’Histoire Naturelle de Paris (MNHN), versed in the taxonomy, ecology and phylogeny of parasitoid hymenoptera, particularly in their use in biological control, author of about thirty publications on these subjects, but above all long fascinated by the biology of Ichneumonidae without psychoanalysis having been able to find a rational explanation to this monomania !