Anatomical structures whose role is venom injection have appeared independently in several orders of arthropods. They can thus be found in Chelerates (scorpions and spiders), Myriapods (millipedes), or insects such as Hymenoptera (wasps, ants and bees) and ant larvae (Nevroptera).

These organs are used either for predation or defense purposes.

Venom, synthesized in a specialized gland, is sent under pressure and injected into the hypodermic tissues, either by the mandibles during a bite, or by sting using a syringe-shaped or sting-shaped structure.

An entomologist at New York University, Amy Berkov, and her colleagues, described in 2008 for the first time the existence of venomous organs in a Beetle Onychocerus albitarsis, a species of the Cerambycidae family. These organs are at the tip of the antennae and their venom causes skin and subcutaneous inflammation in humans.

Scientists were able to describe and study these organs using scanning electron microscopy observations. It appears that the venom distribution system is almost similar to that of the venom organs located at the tip of the tail of scorpions of the Buthidae family.

This amazing discovery highlights a case of evolving convergence.

The Beetles are one of the most diverse animal orders, to the point that one species in four is a Beetle.

These compounds may be of origin endosymbiotic (synthesis by single-celled organisms living in symbiosis in the host organism) or synthesized and stored in exocrine glands (secretion outside the organism) most often found in the thorax and abdomen. The most striking example is that of the beetle bombers (Carabidae of the Brachinini tribe) where the emission of two chemical compounds causes an explosion (lire this article).

In these insects, chemical compounds are not considered venom because there are no anatomical structures to inject them.

2) He thinks he is a scorpion

The first description of a beetle bite was made by Smith in 1884 with the species Onychocerus albitarsis (family Cerambycidae) when I grabbed the insect between my fingers and placed it in the collection container, it inflicted on me to my great surprise a bite by rapid movements of its antennas from front to back…“.

The Cerambycidae family includes 35 000 species. They are all phytophagous and have for first characteristic long antennas intervening in the detection of the plants hosts, sexual partners: these insects are for this reason called “capricorns” or “longicorns”. Some of these species have defensive cuticular growths, which Smith thought of when he misadventures.

Or, following a report of a sting of this species in a man, followed by an inflammation similar to that induced by a bee sting, Amy Berkov undertook to describe the antennal structures of Onychocerus arbitarsis observed under a scanning electron microscope and to confirm the presence of secretory organs ( see Figure 1 and 3).

In 2008, his team identified an antenna tip structure capable of piercing human skin and the presence of chemical compounds that can be injected through channels and pores. The most surprising thing is that this organ is almost similar to that present in the scorpion of the species Leiurus quinquestriatus (family Buthidae) convergence evolutionary .

These venom organs (see figure 2 and 3), similar to those present at the tip of the tail of scorpions, are hook-shaped where the cuticle of the tip is reinforced by its zinc concentration and where the bulbous part contains the venom.

In addition, the apex of the hook presents a pore giving on a excretory channel thus allowing a deep injection of the venom. It would seem that O. albitarsis can carry out several successive stings because following an injection the insect continues its antenatal defensive movements. These behaviours are probably directed at large predators such as monkeys, lizards and birds.

The evolutionary convergence concerns only the anatomy of the organ. Indeed, the composition of the venom of the two species is different: that of the scorpion is mortal for man while that of the beetle causes only slight inflammations. 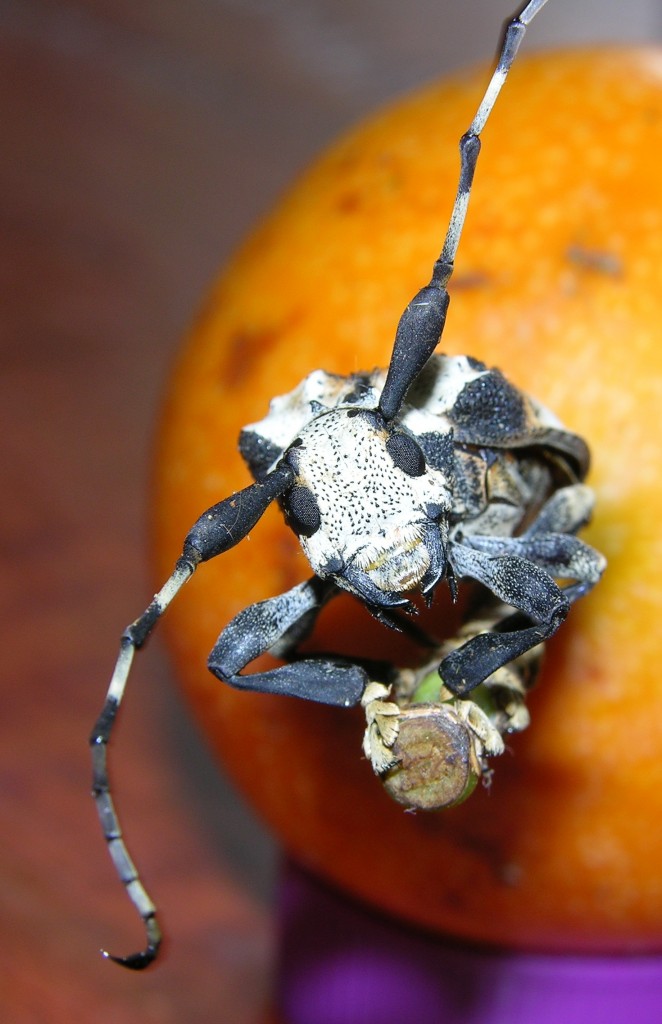 The scientists wanted to analyze the chemical composition of O venom. albitarsis, but this could not be done due to the scarcity of available individuals. For example, only one specimen is present at the American Museum of Natural History in New York (AMNHN), collected during a year of trapping in southern Peru.

Other surprisingly, pores and secretion channels are absent in other species of the genus such as O. crassus. In others, the bulb is also absent. The unique feature of O. albitarsis raises hypotheses about its evolutionary history that will have to be tested by phylogenetic analyses.

One of them proposes the diversion of function from pores and channels originally intended for the diffusion or reception of sexual pheromones. Another hypothesis suggests that larvae develop in plants with toxic sap, although the host plant remains unknown, and when adults emerge, they collect a small amount of this sap, store it in their stinger and then inject it during a sting.

I thank Amy Berkov for accepting to answer my questions and for sending photos from O. albitarsis and her during an expedition to Panama.

Another surprising species of Cerambycidae to discover by following this link: Hypocephalus armatus

– Berkov A., Rodriguez N. & Centeno P. (2008) : Convergent evolution in the antennae of cerambycid beetle, Onychocerus albitarsis, and the sting of a scorpion. Naturwissenschaften (lien)