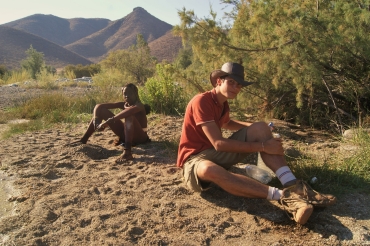 In thesis at Stirling University – Scotland

Pierre-Olivier Maquart is a naturalist like we don’t do anymore, or not much anymore at least. A laboratory researcher as much as a field adventurer, this real coleo enthusiast gave himself, at a very young age, the means to make his dream come true: to live a life-size “action” entomology. Thus he tracked down beetles in Europe of course but also in South Africa, Central Africa, South America – and soon in Southeast Asia -, bringing back many exceptional specimens and making original observations giving rise to publications. As a true “honest man” of the 21st century, “PO” is also a photographer emeritus (we will have the opportunity to present some of his photographs soon), knowing how to stage the living insect as he knows how to photograph with infinite precision the long horns of his personal collection, and a promising author, anxious to put his pen – finally… his keyboard – at the service of scientific magazines or popularization. We will soon find his name in this blog, when we will discuss in more detail some of his discoveries and anecdotes. Meanwhile, it is with great spontaneity that he accepted to answer the questions of Passion-Entomology.

To be honest, I don’t remember never having liked insects… but I think the most striking event was, when I was 5 years old, the discovery in the window of a pharmacy in Dordogne of a box that contained beetles. Since that moment, it’s been obvious. I was lucky enough never to have to ask myself what I would do when I grew up, the answer was so obvious: entomologist! (to the great displeasure of college guidance counsellors for whom this trade does not exist). My mother often recounts the moments when I came home from school with dead spiders in my pockets. Since then I have continued in this direction (entomology I mean, not spider hunting) and gradually specialized in the taxonomy and biogeography of African Cerambycidae and the study of Amblypyges. I think I am fascinated by the little knowledge that surrounds this group, which represents 97% of the animal world. It’s almost terra incognita biological.

I started with a degree in Animal Biology. I had my sixth Bachelor’s semester in South Africa, at Rhodes University, where I was able to take courses in hard entomology and African Zoology. It was a real treat!

Following, I went to the University of Rennes 1 to do my first year of Master of Functional and Evolutional Ecology. I did my internship at the Paimpont Biological Station on the nutrition of the Kerguelen apter fly after a prolonged fast (between 3 and 6 months!).

I then went to the University of Poitiers for my second year of Master. I did my master internship in South Africa, at Capean Museum, on the taxonomy and phylogeny of a group of Afrotropical wasps.

Now I am in my second year of my thesis at University of Stirling in Scotland. I study the potentiality of converting organic waste using a fly – the Black Soldier Fly or Hermetia illucens (Stratiomyidae) for intimates. Its larvae would serve as a renewable and ecological protein source for Tilapia in Asia and West Africa.

Since I was a little boy, I always dreamed of exploring. From trips from Livingstone, to Burton and Speake, or more recently from the raft of the summits (read this interview), I am fascinated by naturalistic trips.

I had the chance to go to French Guiana for a month when I was 17 years old to capture insects, then to reside several months in Southern & Eastern Africa, as well as Reunion Island. This allowed me to learn to adapt to different conditions, often harsh, but also to meet insects in natura. Far from insect boxes, direct observation is obviously much more rewarding, and makes it possible to understand their way of life much better. The biological data associated with these observations are as valuable as the specimens themselves. Going hunting in Southern Africa allowed me to discover extraordinary insects, often endemic, and sometimes new or little known. I brought back many specimens from my travels, and had the chance to discover some new species in the lot, and many species not listed for the countries I visited.

It’s very exciting to say that the insect we’re observing may be unknown to science. This feeling of discovery is a real driving force for me. And yet, far from the scientific aspect, I must admit that each pinned insect has a personal importance for me, since it is often associated with a particular memory…

The first time I met a couple of Ancylonotus tribulus – a very thorny longhorn – on a coffee tree. The species is very common in West Africa, but it was the first time I met a living one. I was like a kid outside a Lego store. I spent a good half hour with a headlamp watching them. When I decided to capture them, not having a box and even less gloves at hand, I took them in my hand. The insects defended themselves fiercely, vigorously planting their thorns in my fingers. Their defense technique worked so well, I left them alone… effective!

I also remember, for example, a hunting day on the beaches of Cape of Good Hope with Candice Owen, who was preparing her doctorate, in search of a tiny wasp, predatory of spiders, living inside oyster shells. This wasp is endemic to some beaches of the Eastern Cape. It’s an absolutely awesome bug that fascinated me as soon as I heard about it! We turned half the beach over to find some specimens. It was really great to meet this tiny bug after so much effort. People must have thought we were crazy!

But there are still a lot of insects and arthropods that I dream of crossing “in real life” such as the Goli<aths/a> Africans, the Mantophasmatodea, limules, or crab of coconut trees…

For the moment unfortunately not really. As they say in Games of Thrones : Winter is coming !

I hope to have time in the coming months to hunt Cerambycidae. Failing that, I had brought back a lot of West Africa to prepare for the long winter evenings !

My research is highly applied for responsible aquaculture development in developing and low-income countries. My thesis is on the use of the Black Soldier Fly. We had developed a project in Ghana called Entoprise which lasted two years.

The objectives were to use this fly to recycle and reduce organic waste – knowing that in West Africa, there is little waste that is unused, we focused on unsold fruit from a local market. During the process – which lasts 15 days – the substrate is reduced to 80% and cleaned (pathogenic bacteria disappear after a few days). This produces two products: the larvae themselves, which are very rich in protein and can be used as fishmeal substitutes in aquaculture, and “compost” – which remains from the bio-conversion process. This compost is very effective on local crops that often use inorganic fertilizers, expensive and polluting.

Our objective was to create a fly production plant and test products derived from bio-conversion (proteins + biofertilizer) locally.

We are currently trying to set up another similar project in Asia to go further in our research… To be continued.

I don’t really know ! I think I will go where the opportunities present themselves. I hope to be able to return to work in France… I would dream to be able to work in systematic entomology, but unfortunately the places are rare…