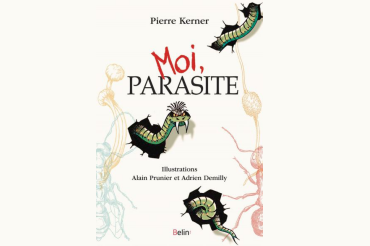 With the publication of his book,”Moi, parasite

“, Pierre Kerner finally offers a forum to organizations too often despised just because they live at the expense of other species. Meet a multitude of parasites of all kinds, including insects. These stories will leave no one indifferent and will delight the curious in search of strong sensations: between the worms which push insects to drown and extricate themselves by their anus, the ticks which make vegetarians or the baby mussels which vampirise fish, our world always pushes further the limits of the extraordinary and the repugnant !

Hello Pierre, can you introduce yourself quickly, not your parasitic you, but your human you ?

My human self is Teacher Researcher in Evolutionary Development Genetics at the University of Paris Diderot where I teach Evolution, Zoology, Development and of course, a little Parasitology. My research concerns the evolution of animals, and more particularly that of stem cells that I study in a marine worm Platynereis dumerilii. Since 2009, I am blogger on Strange Stuff and Funky Things where I talk about surprising subjects, mainly in Biology. I am an active member of the community of popularizers of Café des Sciences in which I have launched projects such as Strip Science (a platform turned towards the meeting between illustration and science) and Videosciences (rebelote but between video and science). I am also regularly active on Podcast Science, a French-speaking amateur science podcast, and I launched my Youtube channel 2 years ago. Like a parasite, I have crept into all the crevices of the popularization of science !

You just published a book,”Moi, parasite

“, where you present the secret life of multiple parasites, how has the idea of approaching such a subject parasitized your mind ?

On my blog, I very quickly addressed the subject of parasitism (Category Freaky Friday Parasite), so prolific is the subject in sordid, surprising and fascinating examples. I was mainly inspired by the blog posts of Carl Zimmer, Ed Yong and Christie Wilcox, but also my own discoveries during my peregrinations on the web. When I was titularized as a lecturer, I had the opportunity to take up again courses in Master on parasitology: I rushed on and started to do a lot of research to prepare a quality teaching, while inserting the finds I had already blogged. I like these two-way contributions between my teachings and my popularization productions. Whether in class or in blog posts, I quickly noticed that the subject fascinates and that parasitism makes it possible to tackle fundamental aspects of biology while returning full of preconceived ideas that one can have on nature. When I was asked which book I would like to write, I automatically thought about parasitism.

You approach biology, ecology and the evolution of host-parasite relations from an original angle, that of the first person, why put yourself in the place of the parasite, a fantasy ?

No, a writing stratagem. When I started the project of the book on parasitism, discussing with the two illustrators Adrien Demilly and Alain Prunier and with Laurent Brasier, the Editorial Manager of the collection Science à Plumes de Belin, we quickly ruled out the possibility of simply copying and pasting my blog articles. On the one hand, I wanted to address the aspects I developed in my Parasitology courses that are quite complex, and on the other hand, I wanted the stories to have a link between them. Brainstorming, we came up with the idea of embodying the parasites. I laughed thinking that we could title the book “Moi, parasite” in reference to “Moi, Président” by François Hollande… Like what, it’s good to laugh. As the writing process progressed, I realized that embodying parasites facilitated the emphatic side, and, even if it was a major constraint, also made it possible to approach subjects on parasitism from a new angle, even for experienced parasitologists or amateurs of this kind of stories.

I’ve really nurtured an interest in parasitism with my blog. At first, I was looking to write blog posts on surprising topics, and parasitism often recurring among exploitable examples. The fact is that parasites exert a morbid fascination for us: we are both disgusted but also subjugated by their way of functioning, their complex life cycle, their strategies to survive, to draw resources. It’s like an attraction for horror films: you’re a thrill seeker and parasites leave no stone unturned. On the other hand, what is particularly pleasant with parasitism is the propensity that this subject has to be able to dispel preconceived ideas and push back the limits of the conceivable. Parasites are excellent examples of incredible do-it-yourself developments.

Of the many types and examples of parasitism you list in the book, which one would you like to reincarnate in your next life ?

As surprising as it may sound, I like writing about parasites, but I’m not particularly attracted to them or their way of life. Like everyone else, I shudder at the thought of being able to host parasites. One of the reasons I write about parasites is to exorcise my fears a bit. As a result, parasites, I respect them more and more… But from wanting to be one…

The world of parasites is little communicated to the general public, it remains mysterious and unknown, why ?

I don’t know if I fundamentally agree with this idea. It is probably a media bubble effect, but on the contrary, I have the impression that we are talking more and more about parasitism. When in 2009 I learned of the existence of parasitic fungi controlling the behaviour of ants, indeed, very few people talked about it. But today, it is an example that many people are familiar with, particularly because of the adaptation that was made in the video game The Last of Us, or the many blog posts and Youtube videos that evoke this phenomenon. One of the challenges of the book was to find original examples of parasitism compared to those found quite regularly on the Internet. But maybe it’s a niche effect.

For you, there is still a lot to discover about parasites in general and those parasitizing human beings ?

During my research when writing”Moi, parasite

“, I integrated discoveries made in 2017 and in 2018, a few weeks before the publication of the book : the field of parasitology is vast and discoveries are made periodically. Given that the vast majority of life forms practice parasitism, it is not surprising that there is still so much to discover about them! In the field of taxonomy alone, when we discover a new species, we must imagine that in reality we have often discovered a host of many parasitic species at the same time, which we will have to study and describe.

Finally, would you have an anecdote of the most disgusting parasite to tell us ?

In researching the parasites used by humans to assist them in their biological control against pests, I came across the way nematodes of the species, Phasmarhabditis hermaphrodita, which are capable of killing their hosts : slugs (we speak of species parasitoids). But, prowess, they are able to control the behaviour of their host and push the parasitized slugs to bury themselves before dying to prevent the nematode larvae from finding themselves in the open air… Practical when you are a farmer and don’t want to see your vegetable garden covered with slug corpses !

Where to get the book :