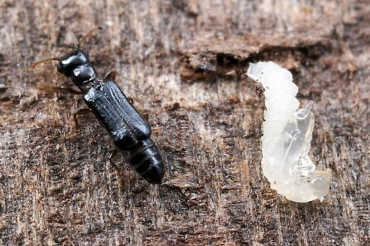 Micromalthus debilis, an Archostemate (smallest suborder of beetles – 50 species) of North American origin does not seem to have evolved for several tens of millions of years : it is the only known living representative of the Micromalthidae family.

Although the species displays archaic morphological characters, its development cycle is both complex and singular, as the American entomologist Herbert S. Barber (1882-1950) was able to reveal – although his observations on the subject cast doubt on its credibility -. Since then, only five experiments have been carried out on this species in 100 years.

The M cycle. debilis combines both haplodiploidy, uni-oviparity (one male egg laid at a time), poly-viviparity (several female larvae are delivered each time) and internal and external matriphagy (consumption of the mother by the offspring).

First, the populations of M. debilis consist exclusively of female larvae (neotenia*) which, surprisingly, only give birth to female larvae without passing through the adult stage. This mode of reproduction is called parthenogenesis thelytoque (lien) or pedogenesis. There is a dimorphism between the larval stages: in the first stage they are active and very mobile (triangulins – 1mm) and apodic in the second (cerammbycoids – 3.3mm).

* Neotenia : absence of the adult phase, the most known case concerns a kind of Mexican salamander, the axolotl (Ambystoma mexicana). Adult individuals have larval organs such as external gills for example.

Even more surprising, when conditions are unfavourable (if the wood in which the larvae develop dries too much for example), the larva in the second stage has two options: 1) puposes and give a female winged adult, 2) moult again and deliver a third stage larva also pedogenetic. This larva then acquires the capacity to lay by parthenogenesis a single egg (arrhenotocic), male, then sinks in a true lethargy. From this egg hatches a larva of another type (curculionid), male of course, very different from the female larva: immediately, she pushes her head into the genital orifice of her sleeping mother to… feed on it (matriphagia). The feast lasts one week before the larva pupates and delivers a winged male. It is possible that this larva leads to matriphagia because it does not have the symbiotic bacteria to digest wood.

Adults are very rarely observed, either in the environment or in the laboratory. Recent studies by the Englishman Alejandra Perotti and her team have shown that adults can appear in vitro when cerambycoid larvae are subjected to thermal shock. These researchers suggest that this insect has almost lost the ability to metamorphose as a result of mutations in key regulatory genes regulating this transformation. The passage to adulthood is particularly rare because scientists were able to obtain only one female for 650 larvae and one male for 10 000 cerambycoid larvae !

The fact that males have become anecdotal in populations can be explained in three ways : 1) A decrease in the probability of matings by a rejection of the females for the related males and a weak capacity of dispersion of the latter, 2) A competition for the local resources, 3) The progeny of a sex increases the fertility and the reproductive value (fitness) of one of the parents, here, the males kill and develop to the detriment of the females, thus reinforcing the bias of the sex-ratio in favour of the females. However, the latest studies do not allow to demonstrate and confirm one of these theories.

The Perotti study confirmed experimentally that adults are physiologically unable to reproduce, this loss probably occurring over time by degeneration of rare adults. Although cases of sterile males in other species may have been described, the fact that in Micromalthus debilis females are also described remains unprecedented according to P.D.N. Hebert (1987). The biological “cost” of “manufacturing” these biologically useless individuals would explain why most of the cycle has evolved towards parthenogenesis. Ghost” adults would thus be remnants of an ancestral sexed life cycle that is now simply vestigial.

The process at the origin of feminization of populations can also involve endosymbiotic bacteria (Rickettsia bellii), detected in all larvae analyzed, known to modify the sex ratio of the population and induce a “feminization” of the cycle. If these bacteria restore diploid and thus female formation, heat would neutralize or kill Rickettsia inducing haploid male formation. No symbiote was detected in adults.

Whatever the case may be, strong of this singular biology, this tiny “living fossil” beetle has colonized since time immemorial the most astonishing environments, such as the props of mine galleries or railway sleepers, in association with moulds. It has been introduced in almost every region of the globe.