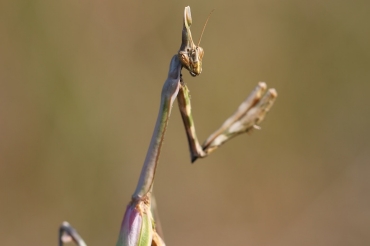 The mantises, a fascinating group of insects known to all for their voracity (some would say their cannibalism), are visible almost everywhere in the world. Only the poles and very high altitude environments do not support species. Elsewhere, they occur from the African deserts to the wet and relatively virgin areas of the various large forest blocks of the planet, passing through temperate regions, mountains…

Mantas are the most diversified in Africa (over 900 species described), then in Asia (over 550 species), in America (over 420 species), in Oceania (over 165 species), finally in Europe (with about 25 species). In metropolitan France, it is possible to observe 8 species, of which the best known is Mantis religiosa (Mantidae), visible from south to north of France (photo opposite).

Resembling, but much more southern, Iris oratoria (family Tarachodidae) is remarkable with its colour patterns on the hindwings. Completely different, Empusa pennata (Empusidae), also called the “Implotin”, is often an emblematic figure in books and nature magazines with its cephalic cone, its long legs and its multiple foliated extensions located a little everywhere on its body.

The other smaller mantises found in France are often geophagous or appreciate the shaved herbaceous stratum. There are Ameles (Mantidae) (Ameles spallanziana and A. decolor) which are distinguished by their more or less stocky morphology and eye shape. Geomantis larvoides (Mantidae), apteran, small, has a tuber behind the eyes. Pseudoyersinia brevipennis (Mantidae) has not been seen in the Var since 1860, although it is present around the Mediterranean. Finally, Perlamantis alliberti, a tiny brown mantis with an almost square pronotum, belongs to the family Amorphoscelidae.

Description of the French species of mantises – Habitus of the various species at the bottom of the page (Source : Nicolas Moulin)[/caption]

The order Mantodea belongs to the Super-order Dictyoptera, like cockroaches (order Blattodea) (lire this article). Currently, the mantises count nearly 2500 valid species, among 16 families (without counting the families of the fossil mantises) Mantodea.speciesfile.org. Until 90 years ago we were only about 1800 species. The number of species described for a century is due to the work of “ants” of several internationally recognized entomologists: Beier, Giglio-Tos, Rehn, Kaltenbach, Roy, … And more recently, Svenson, Stiewe, Rivera, … and always Roy ! Since 1927, date of the last great “fauna” on the mantises, only scattered species descriptions and genus revisions are produced. Will one day one or more entomologists be in charge of updating it? Why should I update?

For 90 years, therefore, publications on the taxonomy of mantises have been scattered: descriptions are isolated in scientific articles here and there; gender and sub-family revisions have been published here in French, there in English… DNA sequencing (cf. box below) has appeared. Genomic studies reorganize the phylum of Mantodea, with the recent creation, for example, of the family Galinthiadidae. If we want to work on a discovered species or genus, then we need to collect all this bibliography to gather the information we are looking for. It’s tedious. It is for this reason, and in the image of existing works on other orders of insects, that it would be necessary that a key of the mantises be updated. Taxonomy is continually evolving but it would at least gather knowledge… At least once a century !

Is it still true that this group of insects is constantly evolving these days. New species are regularly described, often following the discovery of a single individual as, for example, Ovalimantis maculata (Acanthopidae) discovered in French Guyana in September 2014 at the Montagne des chevaux by the Société Entomologique Antilles-Guyane (SEAG), then described in 2015 by Roger Roy of the Muséum National d’Histoire Naturelle (MNHN) whose description made it possible to create a new South American genre of mantes : Ovalimantis. This monospecific genus is therefore known from only one male !

Currently, thanks to new genomic techniques, classical morphological identification of mantises is coupled with DNA barcoding. To this are added studies and theses on life traits (morphometry: size of wings, reinforcements of ravisseuses legs…). These studies conducted by young entomologists (mainly American, German and English) help to boost the taxonomic study of mantises.

For example : Franck Wieland’s thesis (Hamburg) gave a publication on the phylogenetic system of mantises based on their morphological character, the works of taxonomy and the post of editor on Mantodea in Zootaxa of Julio Rivera (Toronto), the works of taxonomy of Martin Stiewe (London) and finally, the coordination of the site of references mantodearesearch.com and the various genomic and taxonomic works of Gavin Svenson (Cleveland) (Bibliography at the bottom of the article).

Let’s get back to their delicate mores… Mantises are predators that feed on insects. Depending on their overall morphology or stage of development, they feed either on small insects (collembola), flying insects (flies, butterflies), or more massive insects (locusts, cockroaches). Throughout their development, mantises live isolated from each other because encounters are often fatal for most species.

In some, cannibalism does not occur in frail, ravenous leg frames. Once adult, reproduction is the main objective. However, as with most spiders, sexual voracity and/or dimorphism is not to facilitate the business of males. They risk being eaten alive at any time (before, during and after). Males can be considered prey and may provide a nutritional supplement to females. Except in “primitive” species (with large numbers of unique morphological characters and at the origin of more evolved characters, illustrating a plesiomorphie : ancestral character) such as those of the genus Metallyticus, where couples pair head/tail like bedbugs, males climb on the back of females to mate. They introduce a stock of their semen into an internal receptor organ in the females’ abdomen, which can then produce several oocytes after a single mating. Mating can start from a few minutes to several hours after the male is placed on the female’s back. Then, mating times vary according to species: in Iris oratoria, this can last between 45 and 110 minutes ; the longest recorded duration is 40 hours ! 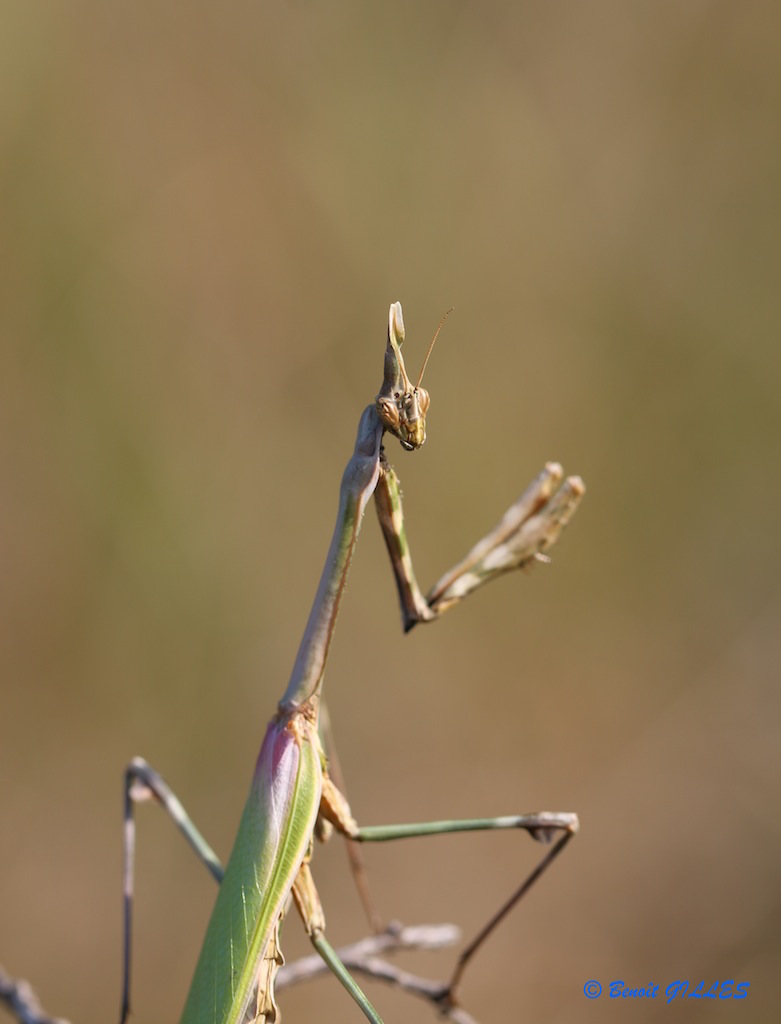 Egg eggs laid at one time in libraries (rigid membrane made of proteins surrounding and protecting the egg-laying eggs of certain insect species) hatch according to time intervals specific to each species, and varying according to weather conditions. For example, at Mantis religiosa, in temperate environments, ootheques overwinter in the vegetation before the young emerge in mid-spring. On the other hand, in equatorial environments, generations follow one another continuously, depending on the duration of embryo development in ootheques, which can sometimes last several months. There are exceptions (at least for species whose biology we know): Empusa pennata, in metropolitan France, spends the winter in the form of young more or less active depending on temperatures (photo opposite). Adults appear at the beginning of summer, lay eggs, and the young, born at the end of August, will moult 2 to 4 times before stabilizing to spend the winter. Globally, it is some young people to several hundreds who will carry out their first moulting by emerging from the ootheca, will dry then will disperse in nature. Being heterometabolas, the mantises, as they moult (between 5 and 10 depending on species and sex), will grow. The flight organs (if they exist) and reproductive organs will develop to be functional after imaginal molt (last molt ending in the adult stage).

Mantle ecology is highly variable. If we return to life history traits, their habitats are just as diverse as their morphology. Like phasemas, mimicry is the key word in many species: some, thin and slender, live in herbaceous strata ; others, very flat or close to the shape and colour of lichen (photo at the beginning of paragraph), live on tree trunks and branches some, massive, green, are difficult to distinguish in shrub and tree strata ; others resemble dead leaves and often move in the middle of dead branches or on the ground; finally, the mantas called “flowers” mimic the colouring, up to the shape, of inflorescences of all kinds (cf. box opposite on the orchid mantis, Hymenopus coronatus).

The morphological diversity of the mantises is equal only that of the phasms. These two groups of insects can be champions in size and camouflage quality. The smallest known species in the world is Mantoida tenuis (Mantoididae), measuring only one centimeter ! While the largest species is probably Ischnomantis gigas (Mantidae), having nearly 17 cm, and evolving in the tall grasses of the savannas of West Africa. The most massive species (considering females, as very often larger than males) occur in South America with the genus Macromantis (Mantidae) and in Africa with the genus Plistospilota (Mantidae).

In a synthetic way, the mantas have a head generally wider than long, in an orthognath position (perpendicular to the body axis). The vertex and forehead can be simple or decorated with tubers, tips, various expansions. The compound eyes are developed. They are completed by simple eyes, ocelles, located between the antennas. The latter are well developed in all species but can vary in shape from wire-like to pectinated antennas (like moths). The mouth parts are of the types grinder.

The thorax is of diversified form; it is what directs the general silhouette of the mante : short, long, broad, with foliate expansions, tubers, tips… It carries the three pairs of legs and the two pairs of wings (when they are developed).

The paws anterior (called ravisseuses) are more or less developed and armed with thorns. It is a very distinctive morphological point to differentiate species. The number of thorns and their arrangement are important. The middle and hind legs are generally simpler, except when they are decorated with expansions or lobes as in Toxoderidae, Acanthopidae, Hymenopodidae…

L’abdomen of variable shape is generally elongated with ten tergites (dorsal), nine sternites (belly) in males and seven in females. The tenth (and last) tergite constitutes the supra-anal plate, which is of variable shape also according to the species. The abdomen is finished with a pair of segmented cercas. Here too, the forms vary, and in particular that of the last segment: it can be flattened, cylindrical, foliated. In males, the last (ninth) sternite (subgenital plate) carries styles, often very simple conformation. In the concavity of this plate are the genitalia (reproductive organs). They are always asymmetric in shape is divided into three parts: a ventral hypophallus, surmounted by a left epiphallus and a right epiphallus. The genitalia of males constitute a major criterion for the specific identification of mantises… It’s about the key and the lock…

Presentation of the author : Nicolas Moulin

Freelance entomologist, I have been working for over ten years on inventories for environmental assessments, for monitoring insect populations, for monitoring protected species. I also carry out educational activities, training in entomology and business creation. My contracts make me travel all over France (within the limit of my biogeographical domain of the plain because I am not specialized in the species of altitude or the Mediterranean Basin) but also in the DOM-TOM. Punctually, I leave France for Africa mainly, to supervise students in field schools in the tropics (ECOTROP).

My work on mantises is non-profit, but brings me a personal satisfaction of improving my knowledge on the taxonomy and ecology of these fascinating insects. I write articles on popularization, systematics, biogeography or ecology, and I participate in the enrichment of DNA sequence banks concerning them.

Habitus of the different French species of mantis