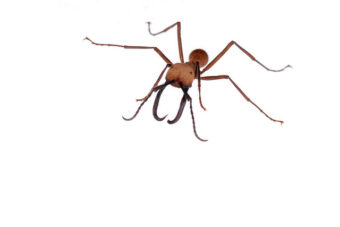 Ants of the genus Eciton are called “legionnaires” because of their nomadic way of life and their hunting technique which consists in capturing any animal in their path. Several species occur in tropical forests in Central and South America.

I was lucky enough to observe the species Eciton burchellii, which is widely studied on the island of Barro Colorado in Panama, during my stay in Panama. When we cross these ants in the undergrowth of the forest, their speed, their number, their aggressiveness and especially the noise they make while walking do not leave indifferent. Their organization has always fascinated me, to be able to observe them in their natural environment has been a real happiness for me. 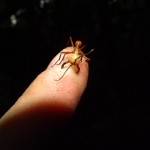 As with many ant species, there is a strong polymorphism among workers, forming castes. Thus, 3 castes are described: 1) Minor (small size) whose role is to care for eggs and larvae, 2) Media (medium size) whose role is to collect food and form the bivouacs, 3) Majors (large size), also called Soldiers (see photo), whose role is the protection of the colony. The soldiers are recognizable by their voluminous heads and especially by their long, thin and curved mandibles.

A savoir : soldiers cannot open their mandibles once they have bitten, to remove them it is necessary to break the head and to tear everything. I believe that some human tribes use these ants as staples and stitches…

Another example is presented in the genus Atta (“mushroom ants”) here.

These ants have the particularity of having a nomadic way of life, they do not build nests in the ground or in trees but build “bivouacs” above ground formed by the ants themselves which hold to each other. The largest colonies can number more than 500,000 individuals. The bivouac can thus reach more than one meter in diameter and nearly one kilo. The colony shelters and protects the queen, larvae and brood (eggs).

A further characteristic of this species is the presence of a 35-day activity cycle where 2 phases follow each other.

– The cycle starts with a 20-day phase. During this phase, the colony remains fixed in the form of bivouac, the workers (soldiers and Media) leave in search of food and the queen begins to lay eggs. Hunting takes the form of tree raids where insects, arthropods (millipedes, scorpions…), amphibians, even small birds and mammals are captured, cut up and brought back to the bivouac (see video). Thus, up to 30 000 prey per day can be consumed by the colony which will allow the queen to lay nearly 100 000 eggs during this phase! In order not to exhaust food stocks, each day the direction of the raid and the area surveyed are different. The direction of the raid is shifted by a precise angle (123°), which allows in the end to prospect the whole territory around the bivouac.

– A second 15-day cycle takes over. This phase is nomadic and coincides with the hatching of eggs and the appearance of the first larvae. The demand for food is increasing enormously, hence a daily change of hunting area. Every day, the whole colony moves (with queen, larvae and nymphs) and builds a new bivouac. After 15 days, the larvae pupate*, the demand for food decreases, the colony can become sedentary again and start a new cycle of 15 days.

Other tropical ants species to discover here Atta and Cephalotes.

Recommendations of works on this theme:

– The world of ants

– The extraordinary world of ants